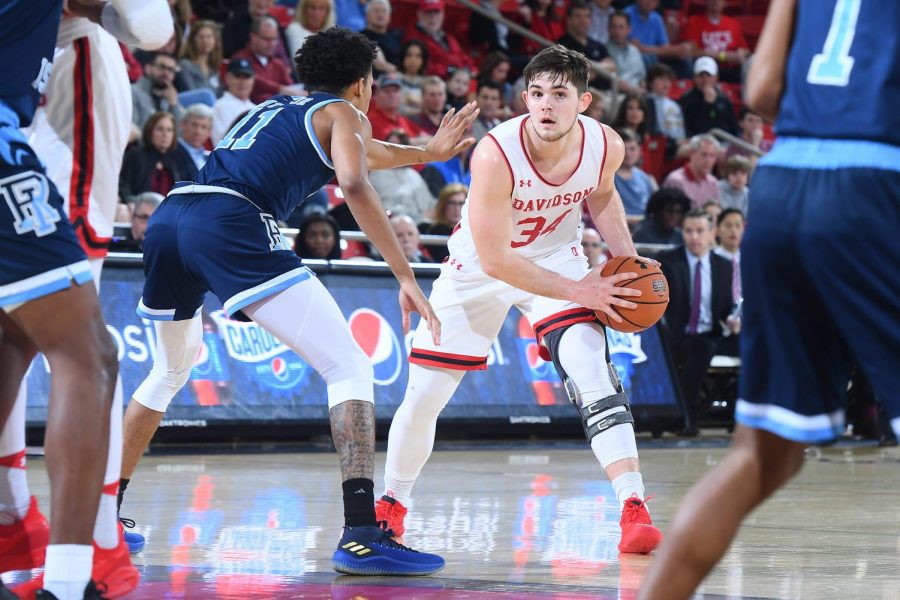 Guard Luke Frampton during a game against Rhode Island in A-10 men's basketball action at Belk Arena on Wednesday, February 06, 2019.

Frampton comes to The Hill from Davidson, where he made a name for himself as he became one of the top shooters in program history.

“We liked Luke out of high school a few years ago, and we feel blessed to have this opportunity to join our program now,” head coach Rick Stansbury said. “It’s very obvious he’s a great shooter, but we believe he brings much more than that. He’s a great passer with a high basketball IQ, and he comes from a great high school program in West Virginia under Allen Osborne. He had a lot of success at Davidson, and we believe he fills a need for our program – a guy who can make shots and is also a quality person.”

The Poca, West Virginia native started all 39 games he played for Davidson, including all 34 games as a redshirt freshman.

Frampton led the Atlantic 10 in both 3-pointers made and 3-pointers per game (2.9) as a redshirt freshman. In league play, he shot 42.3 percent from long range and made a league-best three 3-pointers per contest, with seven games of at least five made 3s.

The 6’5 guard started and appeared in just five games in the 2019-20 season before taking a personal leave of absence. He averaged 9.8 points and shot better than 48 percent from 3-point range in his few outings.

During his time at Davidson, he also averaged 3.2 rebounds and tallied 76 total assists against just 38 turnovers.

Before arriving at Davidson, Frampton was a three-time all-conference player at Poca (W.Va.) High School. He was an all-state selection as a junior and also lettered in baseball.