What’s it like to go to a concert in a mask? Tidball’s opens doors for first show in months 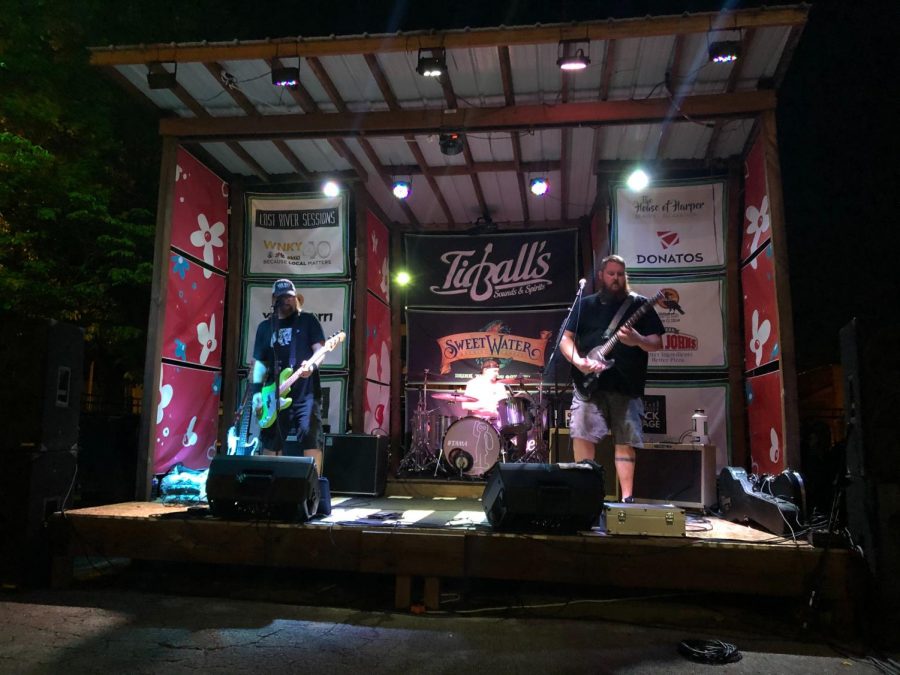 Tidball's held its first outdoor concert since the venue was closed due to COVID-19 on July 17, 2020.

After nearly a four-month hiatus without fans, Tidball’s has finally opened concerts back up for the public to attend.

July 10 marked the re-opening party for the hub of Southcentral Kentucky’s music scene. With a fence and new outdoor seating in front of an outdoor stage, Tidball’s is ready to adapt to the new normal.

On July 17, Bowling Green bands Billy the Droid, El Astronauta and Dos Cobros took the stage for the first time since February, marking the second Friday in a row Tidball’s held a concert since the COVID-19 pandemic began.

“I’m sure there were patches in my youth of not playing much between gigs, but I don’t recall four months of no shows at all,” said El Astronauta bassist Dean Collier.

Concert attendees and band members are now asked to wear a mask upon entry and are encouraged to social distance among the spacious outdoor seating that is now at the venue. Along with these measures, Tidball’s is restricting the capacity to all concerts.

Even with the new guidelines, a good showing came out in support of the three bands laying down the tracks on this evening of live music. Quartet Billy the Droid opened things up with an exotic mixture of psychedelic and alternative rock that brought great energy to begin the night. The keyboard can really be heard in this group’s songs and it makes for a fun feeling vibe. The most unique feature of Billy the Droid was the attribute of having four members, as opposed to the other two bands performing, having no more than three.

A common theme among Bowling Green bands to have three members, or less even, but the ability of these four to put together the uniqueness of their sound certainly did not go unnoticed.

El Astronauta followed things up with electricity. The trio ripped out 13 songs in just under an hour long set, setting the audience on fire. Included in the set were three songs from the group’s recently released EP “Will Skate for Food.”

“We’ve been recording and having rehearsal leading up to this, so we were definitely ready,” Dean Collier said. “What we weren’t ready for was the humidity levels.”

The humidity matched the energy El Astronauta brought to the stage with vocalist Collier tossing out t-shirts to fans in the audience. This group has gotten tighter, even with a four-month break from shows, since the last time they performed at Tidball’s in February. The night only got edgier from there on out.

Power-punk duo Dos Cobros finished off the night with some hardcore riffs and thunderous drumming by Josh Hines. Hines lost a stick on multiple occasions from the fast beats he laid down while keeping a great pace all night long. What is most impressive about Hines and guitar player JD Minor is their ability effortlessly keep a consistent tempo throughout their set. One song leads into another smoothly and the set was no longer than 40 minutes.

The long anticipation of playing live again for the all the bands could be felt in their performances. It was satisfying to see things back to somewhat normal.

“Four months off and losing several dates along the way was just a never ending nightmare of sorts. We’re definitely not in the clear yet,” Collier said.

While local music fans should not get their hopes too high with many more performances like this in the near future, it is important to support these artists in any way possible during this pandemic.

“As bad as we wanted to play, we also were concerned very much for not only our health and our family’s health, but for the fans in the audience and the staff at the venues,” Collier said. “We are all in uncharted territory with this thing.”

Not only are local artists struggling, but the venues are as well. That is why it is equally important wear a mask and social distance at all times, not just at the venues. The sooner this pandemic passes, the sooner there is good news and more shows for venues like Tidball’s.

“Tidball’s is a legendary club, and we’ve done everything in our power to help keep them from closing like so many have. In our darkest hour, this music scene has rallied together to help save this venue because our lives and our art depends on it,” Collier said. “The ones in attendance to all the shows so far are there with a little bit of fear, and a whole lot of pent up emotions of needing that live music fix.”