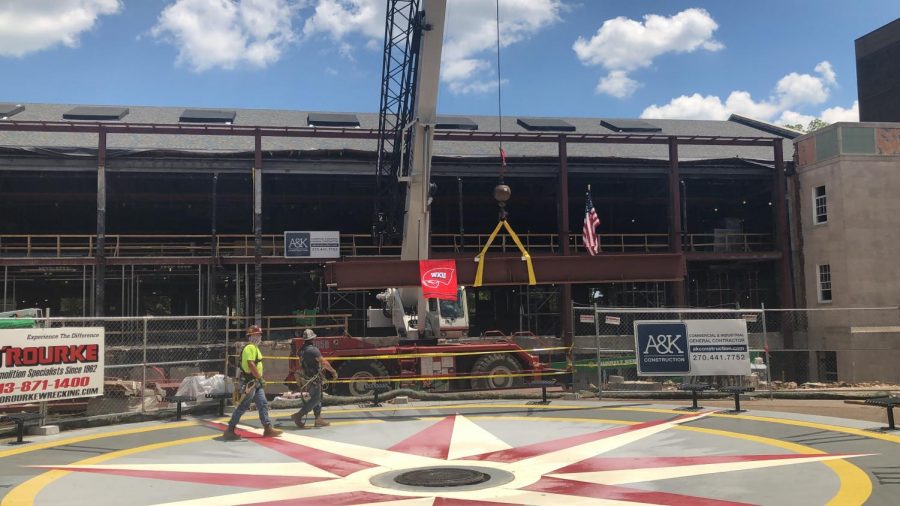 Marking a turning point in the construction of the WKU Commons at Helm Library, onlookers watched today as workers installed a 25-foot-long beam meant to support the building.

Aric Andrews, the president and CEO of Louisville architecture firm Luckett and Farley, the architecture firm that designed the renovations as well as others, were on site for the photo opportunity and to discuss the construction.

The 15,000 pound beam raised today will line the new glass west wall and support the third floor, along with six other major beams. Andrew explained that the beam raising was a celebration of a midpoint of construction.

“We’ve already broken ground and construction has been going on for a while and when you reach a milestone when you reach the top of the structure, it’s a really good time to stop and reflect on where we have come from and prepare for that last push to finish off,” said Andrews.

Andrews said that the new glass wall is a deliberate move that will give a lot of transparency and make a statement.

“It will reflect the great things that will be going on within the commons. We get a little bit of the history that remains, but we get the new look of the glass facade, a window in and out, of the new commons,” Andrews said.

David Broz, Principal at Chicago-based architecture firm Gensler said that one of the design visions was to be the windows to the world, playing off the history of the building.

“The original building was about looking inward because it was a sporting venue, so it made complete sense that there was a solid facade that you couldn’t see until you went inside to see the action,” Broz said.

Broz said that the windows to the world are not only for students in Bowling Green but for former people looking back to the library.

The future WKU Commons at Helm Library will be an intellectual hub where students, faculty, and staff gather to share ideas and engage in active learning, according to their website.

After the photo session, people signed the beam and Caboni shared that his quote to come is for all future students who come to the building.

“What I wrote for all of our future WKU students was ‘I hope their lives are transformed by the conversations that happen in this building,’” said Caboni.

For Caboni, the WKU Commons will be a  point of connection.

“This is not about a physical structure,” Caboni said. “This is about a place, on top of the hill, for our faculty, staff and students to gather together to engage deeply and to have difficult and meaningful conversations and what better way to do that than over a meal?”

The Commons will offer multiple dining options, individual and collaborative work spaces for students, as well as offer a place for student engagement with faculty and staff, while honoring the building’s history as the original basketball arena, which was built in 1934. It was reconstructed as a library in the 1960s and named after librarian Margie Helm.

Once completed, the project will be a 85,000 square feet multipurpose facility. The Commons is set to be completed by spring of 2021.