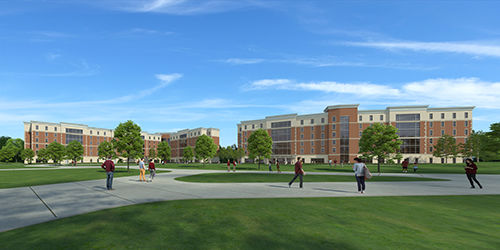 The First Year Village, shown in this rendering, is expected to be open by fall 2021. It will include living learning communities with pod-style living for groups of 25 students with shared interests.

Despite the ongoing COVID-19 pandemic, the First Year Village is still “on track” to open for the Fall 2021 semester, according to Bob Skipper, director of media relations.

After the Spring 2020 semester, Barnes-Campbell Hall will permanently close. The dorm is scheduled to be demolished during a span of approximately 90 days from June through September of 2021.

The First Year Village will contain new pod-style housing as well as two new residence halls. 25 students will share common spaces and have access to special features such as living and learning communities, music/practice recording studios, classrooms, and community areas in every pod.

WKU envisions an increase in enrollment and student retention rates if the plan succeeds, according to a previous Herald article. The First Year Village will be available to WKU freshmen beginning in 2021. Freshmen are not required to live in the First Year Village.

According to WKU’s Housing and Residence Life website, “The improvements made will further promote campus living involvement, intensify each student’s connection to WKU and provide a premier living- learning experience.”