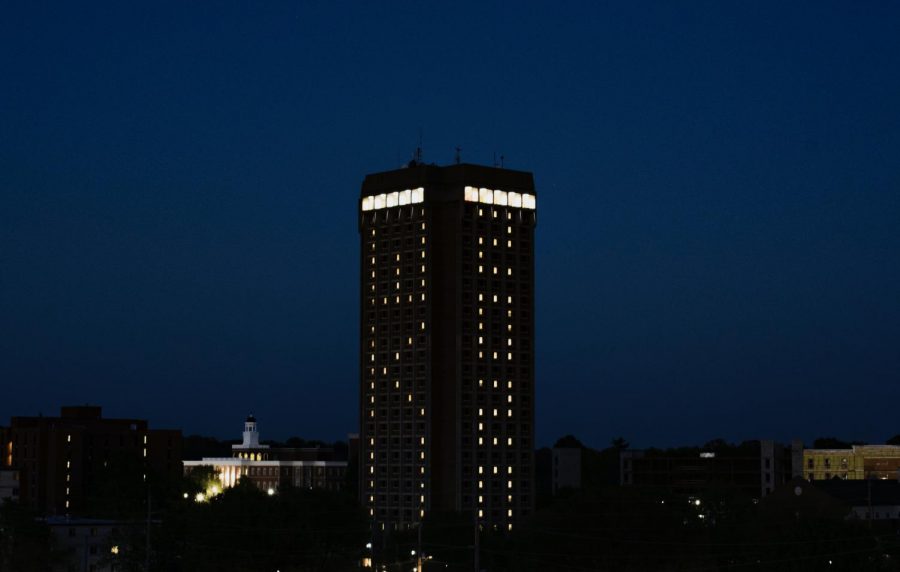 The rooms in Pearce-Ford Tower were lit up to honor WKU’s class of 2020. Due to the coronavirus pandemic, commencement for WKU seniors was postponed until September.

WKU faculty and staff who are paid more than $50,000 a year got tough budget news in their inbox Monday morning — emails detailing how much their pay would be cut in the coming year to help offset the university’s $27 million deficit from the global coronavirus pandemic.

The email said the cuts will be effective July 1. “This action is an example of the shared sacrifice WKU faculty and staff are making to help address the unprecedented financial challenges caused by the COVID-19 pandemic,” Executive Vice President Susan Howarth said in the email.

Julie Shadoan, chair of the Faculty Senate, said the cuts track with the recommendations her group and the Staff Senate made in May. “The structure adopted was in fact progressive, and yes, it was intended by the Faculty Senate that those earning salaries below $50k would be exempt from the salary cuts,” she said in an email.

Bob Skipper, director of media relations, did not provide the number of WKU employees affected by the pay cut. The intention, officials have said, is to reduce the deficit by about $2.4 million.

Those wanting to see specifics of how the cuts affect different salary amounts can use a calculator WKU posted Monday on its website at https://www.wku.edu/covid19/budget/

On April 17, President Timothy Caboni announced that he would be taking a 10% salary reduction while also forgoing any bonuses to give to the WKU Opportunity Fund during the pandemic. Top executives as well as the football and basketball coaches followed suit and took 10% reductions benefiting the Opportunity Fund, which provides aid to students.

In an email, Skipper said those cuts were for the current year “to assist with the immediate needs of students” and will end on June 30. “Beginning July 1, cabinet members will participate in the temporary salary reduction strategy proposed by the Budget Executive Committee,” he said.

To cope with the financial impact of the pandemic, WKU is making university-wide cuts totaling $16.5 million through freezes on hiring, spending and travel and by tapping into $6 million anticipated from unspent funds left over from the current year. With the temporary salary cut saving $2.4 million, the remaining $8.1 million in cuts will be made to colleges and programs throughout the university.

Final approval of salary reductions will be on June 26, when the Board of Regents meets to consider WKU’s budget for 2020-21.