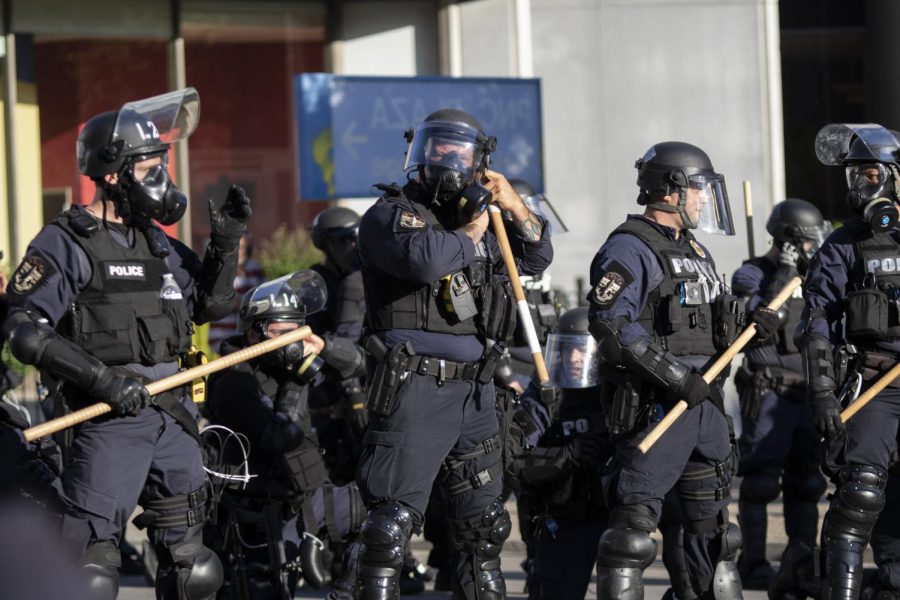 Police Officers post up outside of City Hall in Louisville, Kentucky while trying to contain protests over the death of Breonna Taylor.

In a press conference on Monday, Gov. Andy Beshear urged the Kentucky State Police to investigate a shooting in Louisville that led to the death of a local restaurant owner early Monday morning.

Beshear demanded the Louisville Metro Police Department to release “significant camera footage” of a shooting on 26th Street and Broadway that resulted in the death of David McAtee, who owned a barbeque restaurant in western Louisville. Chief Steve Conrad reported that someone had fired a weapon at LMPD and the Kentucky National Guard.

“We believe there were shots fired last night, both by LMPD and a couple members of the National Guard,” Beshear said. Beshear wants LMPD to release footage of the altercation because he wants people to comprehend what actually happened, especially if an “act of aggression of firing upon LMPD and the National Guard” did occur. Beshear hopes that the camera footage will be released “long before nightfall”.

Before addressing the late night shooting, Beshear invited the mother of Breonna Taylor, Tamika Palmer, to share her thoughts on the reaction to the shooting of her 26-year-old daughter. On March 13, Taylor had been struck eight times by gunshots that were fired by LMPD officers.

“It’s sad that we all have to be here for this, but I don’t think I’m asking for too much, just justice for her,” Palmer said. “But we can’t get justice with violence.”

Beshear said that he will never understand the pain and frustration of those who are negatively affected by racism, but he would continue to listen to those who feel burdened by it.

“I’ve had individuals try to create fear and terror in my own family,” Beshear said. “But that’s been a few days, maybe a week, certainly not a lifetime.”

In a thread of tweets on May 29, WKU President Timothy Caboni reacted to protests in Louisville and around the country that stemmed from the deaths of Taylor and others.

“The deaths of Breonna Taylor in Louisville, Ahmaud Arbery in Georgia, and George Floyd in Minneapolis provide us with a stark reminder of the racial injustice that exists in our nation.”