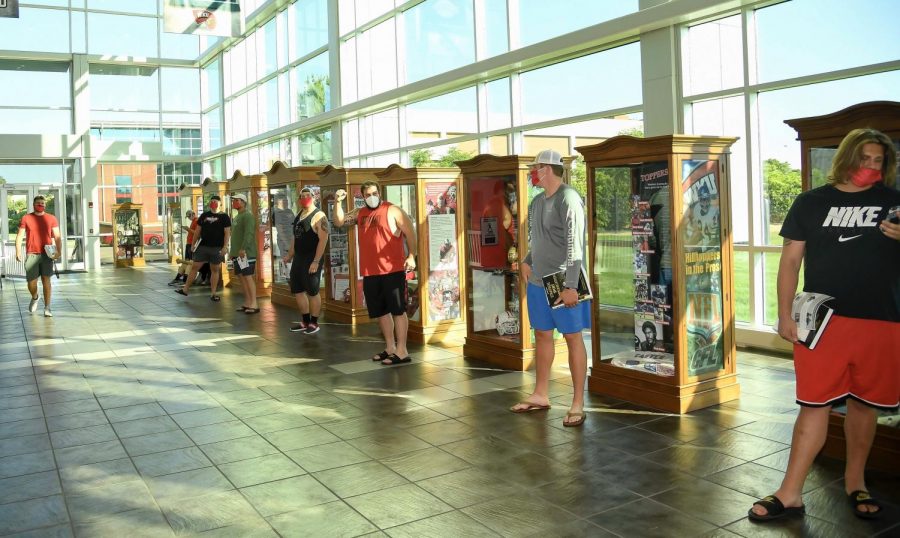 The first 65 football players returned to athletic facilities on campus, while the next wave of 45 players will return on July 6.

Fall camp is set to begin on August 7.

WKU’s COVID-19 Restart Plan includes a 28-page guide for coaches and players that follows a plan of action for just about every phase of living.

The document is due to change under the developing circumstances of the coronavirus.

Notable in the restart plan is a Medical Plan of Action, which states ongoing screening after arrival to campus. The accepted temperature range for players and coaches’ states anything above 100.4 F as abnormal.

An assessment of every athletic department personnel is required prior to the return of an approved level of activity.

The plan states, “If there is a potential or identified risk from the screen, we will follow the plan set by local public health and our medical team.”

The Housing plan of action states, “WKU Athletics currently projects to have 74 student-athletes living in Hilltopper Hall during the summer, as well as 102 living in Kentucky Street or off-campus housing.”

All visitation in residence halls will remain suspended.

Lastly, as part of the Restart plan a Contingency Plan states, “As Governor Beshear continues to outline plans in the coming days and weeks, WKU Athletics will develop contingency strategies for the summer and beyond in relation to the state’s phase system and how that affects operations, as well as any changes to the intended in-person instruction model for the fall semester.”

The Hilltoppers first game of the season is slated for September 5 versus the University of Tennessee Chattanooga in Houchens-Smith Stadium.

With 16 returning starters back on offense and defense, the Hilltoppers will look to improve on an emphatic nine-win season and a shot at the C-USA Championship.