‘The Falcon and the Winter Soldier’: Wyatt Russell on Becoming (the New) Captain America 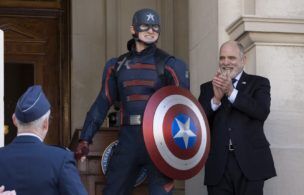 ‘The Falcon and the Winter Soldier’: Wyatt Russell on Becoming (the New) Captain America

[WARNING: The following contains MAJOR spoilers for The Falcon and the Winter Soldier Season 1, Episode 2, “The Star-Spangled Man.”]

The Falcon and the Winter Soldier may revolve around Sam Wilson (Anthony Mackie) and Bucky Barnes (Sebastian Stan), but it’s John Walker (Wyatt Russell) who seems to be the talk of…America.

Appointed as the “new Captain America” by the government, John is a decorated soldier stepping into the role left behind by Steve Rogers. And while John continues to win over the masses, it’s not so easy winning over Sam and Bucky, especially when Cap’s shield was intended for the Sam’s use. Following a failed attempt at a team-up in Episode 2, John advises Sam and Bucky to stay out of his way. See Also‘The Falcon and the Winter Soldier’s Amy Aquino on How Bucky’s Therapy With Sam Went Down
‘Dr. Raynor sees Sam as the one possible chink in [Bucky’s] armor.’

TV Insider talked to Russell about Walker’s path to earning respect, whether he sought advice from Evans, and more.

John tries so hard to win Sam and Bucky over, but does he deserve their respect?

Wyatt Russell: If I wasn’t playing the part, I would say [in] any new situation where you’re being brought onto a new team, you’ve got to prove that you’re worthy of your position. So I think he needs a little bit more time to prove himself before Sam and Bucky would say, “All right. You’re good.”

That’s a really good question. I don’t know. I think that he cares more about being a good Captain America, just trying to do the best job that he can, which is get the bad guys. It drives him crazy if he can’t get the job done well.

So, what will Sam and Bucky staying out of his way look like?

It would just be, if you’re not going to help, then you’re going to hurt. Don’t show up, because bad things could happen.

Should we be concerned that Sam and Bucky would rather turn to Zemo [Daniel Brühl] than team up with John?

I think everybody would be concerned turning to Zemo for help, but it’s definitely not a vote of confidence for John. And in regards [to Sam and Bucky], we’re going to see how that all plays.

John’s a highly skilled, decorated soldier. What was the training process like for your role?

A lot of training went into it. Justin Eaton is my stunt performer. He’s the guy who makes John Walker sing. He’s amazing. We would do a lot of shield work to make me look comfortable and understand how to use it, work with it, and make things happen. That was very difficult because the shield’s heavy, cumbersome, and sometimes it’s funky. And then doing little flips and things here and there to make it feel dynamic. We’d spend a lot of time training and just literally physically working out. I spent quite a bit of time in the gym and eating right, doing all that stuff. You’re the second Captain America. Did you reach out to Chris Evans for any advice?

I didn’t contact him at all. It felt like I’d be bothering him. I’m not [playing] the same person, so I didn’t feel the need. The last thing in the world that he’d [probably] want to get is a phone call from me going like, “Hey, what’s it like to be Captain America?”

Your initial reveal on the show has had some strong reactions from fans. Any thoughts on how people are feeling about him?

When you’re an actor you’re in the gladiatorial bin, you’re there to be judged. That’s why they pay me, and that’s why you do what you do, you’re just there to be judged. So when it elicits that type of reaction, I feel great. All I’m doing as an actor is trying to elicit some chain reaction of emotion that people can then say, “Oh, I hate it, or I love it, or this or that.” If that makes somebody feel like they have to vocalize it, I feel like I’m doing my job. So it does feel good that people are having a strong reaction.