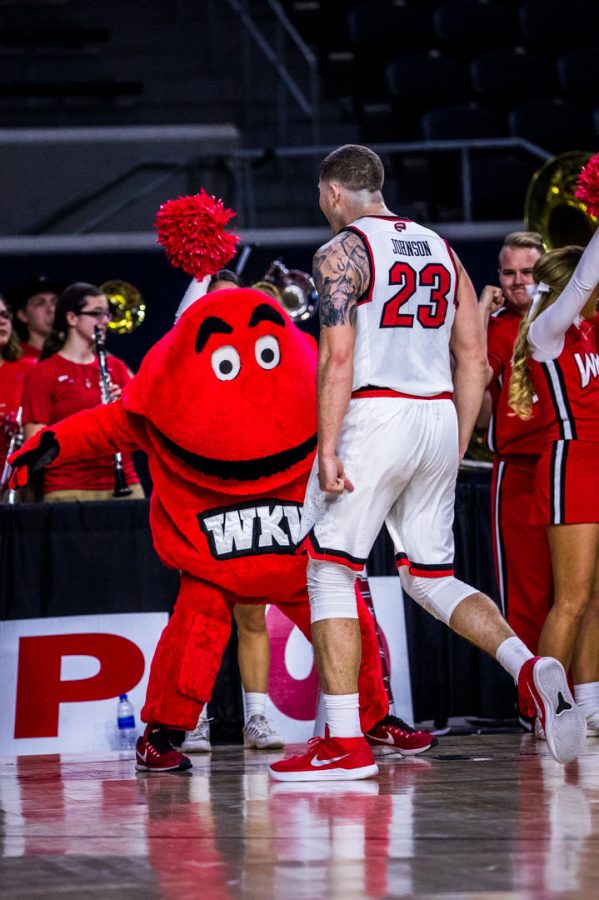 WKU Forward Justin Johnson (23) celebrates with Big Red during the Hilltoppers 98-70 win in their first game of the Conference USA tournament against University of Alabama at Birmingham on Thursday March 8, 2018 at The Star in Frisco, Tx.

Editor’s note: A previous version of this story incorrectly attributed a quote to WKU Associate Athletic Director for Communications and Media Relations Zach Greenwell when Greenwell wasn’t actually interviewed for this piece. The story has been updated and the Herald regrets this error.

As the spring semester at WKU paused for a week-long spring break on Friday, March 6, the Hill couldn’t have seemed anymore typical. The cherry blossom trees had just started to bud, lining the Centennial Mall sidewalks with beautiful sights. Warm sunlight started to heat up an entirely empty campus, which still remains vacant now after COVID-19 changed the world.

But just as swiftly as spring arrived, Conference USA suspended all spring sport competition on March 12. The NCAA also canceled its men’s and women’s basketball tournaments in addition to all of its remaining spring and winter championship events that day. C-USA updated its suspension to a cancelation of all spring sport competition and championships days later on March 16.

In an instant, coaches and student-athletes were told to go home. Fans could no longer sit in the stands at Nick Denes Field or the WKU Softball Complex.

Competition at WKU was over until at least the 2020-21 academic year, and although the NCAA voted to give spring sport student-athletes an extra year of eligibility, satiation seemed to be very far out of reach for competition-hungry Hilltopper supporters.

Aware that sports fans were sitting at home with nothing to watch or get excited about, the College Sports on SiriusXM Twitter account created the 64-team SiriusXM Mascot Bracket.

When the initial bracket was released on April 3, WKU mascot Big Red was not accounted for, and fans called for the inclusion of several snubbed mascots. Organizers relented, agreeing to add two more mascots to the bracket via play-in games scheduled to begin on April 5.

“Hundreds of Western Kentucky fans really let us have it on social media for having left out Big Red,” Mike Mazvinsky, the senior director of college sports programming at SiriusXM, told the Bowling Green Daily News in a piece published on Tuesday, April 7.

Big Red was matched up against Landshark Tony, the mascot for the University of Mississippi’s athletic teams. Big Red didn’t disappoint, earning 89.3% of the 2,482 votes that were cast.

Once Big Red’s presence was felt by one SEC program, the infamous red blob was penciled into the tournament field, earning a first-round matchup as a No. 16 seed against No. 1 seed LSU and its famed mascot, Mike the Tiger, on April 6.

WKU was set for an uphill battle right off the bat, but Hawesville sophomore Brandon Hunt said he was confident in Big Red’s ability to overcome the early challenge. Hunt thought WKU would “get past the first round for sure” after Big Red was able to sneak its way into the tournament.

Big Red pulled out the upset, claiming victory over top-seeded Mike the Tiger with 53.5% of the 14,850 votes cast. Big Red’s next opponent also hailed from the SEC — No. 8 seed Aubie the Tiger, the mascot for Auburn’s athletic teams. WKU overcame the odds yet again, collecting 53.3% of the 18,551 votes cast en route to an appearance in the Sweet 16 round on April 7.

Following each round of voting, humorous video clips were posted on Big Red’s social media channels. WKU creative content producer Logan Fry was in charge of “shooting and editing the videos,” but he received assistance and “content ideas” from WKU assistant athletic director of marketing Olivia Higgins, WKU sports information director Matt Keenan and several others.

“Most of the polls closed around 11 p.m. CST, so our team would be monitoring the poll throughout the day and planning for potential outcomes,” Fry wrote in an email.

“We had a content plan for a win or loss of each matchup. We wanted our fans and Big Red supporters to have immediate feedback dependent on the outcome of the poll. It takes a lot of time to put a video or graphic together, so we tried to plan as far out as we could.”

The Sweet 16 brought a matchup against No. 13 seed Georgia Tech and Buzz the Yellow Jacket. Big Red pulled away from the ACC school early on, eventually claiming its most lopsided victory throughout the entirety of WKU’s run through the mascot bracket.

“It was crazy,” Hunt said. “And I knew that people loved him, but then it felt good to see teams we beat along the way supporting after we defeated them.”

After dispatching Buzz the Yellow Jacket by snagging 80.5% of the 10,270 votes submitted, WKU moved on to the Elite Eight round on April 8. No. 14 seed Tennessee and Smokey awaited the Hilltoppers, providing opposition to the university’s bid for an appearance in the Final Four.

After 27,728 votes were cast for the Elite Eight matchup, Big Red was again victorious. WKU collected 51.6% of the votes on April 9, making its way to the national semifinal round for a matchup with No. 6 seed Oklahoma and the Sooner Schooner.

“I was checking by the hour on the results on Twitter,” Hunt said. “I would go on break at work and check on the later rounds.”

No one had expected the red blob from WKU to bounce into the mascot tournament and pull off the upsets it had. Big Red ran through the field on several consecutive days, earning a break from Thursday, April 9 until Final Four round voting got underway on Monday, April 13.

In total, 25,154 votes were cast for the lopsided matchup in the Final Four round, with Big Red coming out on top and heading to the national championship by claiming 61.7% of votes.

“Big Red is a nationally loved mascot that comes out of a small school,” Hunt said. “He took down big schools like LSU, Auburn and Ole Miss.”

Fry said WKU was very happy to see its fans showing out in droves to support their beloved mascot round after round, but he personally wasn’t surprised, adding that he believes “it only takes one interaction with Big Red for someone to know that Big Red is something special!”

After a pair of Final Four round polls that stretched from April 13 until late April 14, the national championship game was set. WKU would meet fellow No. 16 seed Cosmo the Cougar, which represents Brigham Young University’s athletic teams, with a national title on the line.

“First, Western has one of the most winning programs in all of college basketball, if you look up statistically,” Shultz said during the live media spot on April 16. “I think if you really want to find the vibe and feel the vibe about Western’s basketball and the passion people have, go to Diddle Arena when we’re playing, and I think you’ll feel that. There’s a reason we upset some big teams that come in there and why some big teams don’t want to come into Diddle Arena.”

The poll for the national championship matchup opened at 11 a.m. on Wednesday, April 15, and closed at 11 a.m. on Friday, April 17. The final round lasted two full days, allowing fans to cast 96,035 votes. Minutes after the poll closed for new votes, SiriusXM released a statement.

“The polls have closed, but due to suspicion of voter fraud an investigation is underway,” the College Sports on SiriusXM Twitter account tweeted at 11:02 a.m.

Controversy arose on social media with a few hours left on the final poll, as thousands of votes in Cosmo’s favor caused WKU to lose its lead. Barbs were traded back and forth on both sides, with WKU supporters accusing BYU supporters of buying votes for Cosmo with Twitter bots.

After three hours of deliberation, the College Sports on SiriusXM Twitter account tweeted its final decision on the official SiriusXM Mascot Bracket national champion. Cosmo the Cougar was crowned national champion, claiming 51.1% of the vote over national runner-up Big Red.

“During the investigation, because of potential voting issues @SXMCollege graciously reached out and offered to let us decide the national champion with a game of rock-paper-scissors, but we declined,” the WKU Sports Twitter account tweeted after the official ruling. “Too many sports fans had come together to reach a common goal for it to end that way. That being said, we suspected BYU would’ve thrown paper, so we intended to go scissors.”

Fry said he believes Big Red deserved to claim the national championship vote, confirming to the Herald that SiriusXM representatives “decided to let the poll stand” after WKU declined to participate in a decisive game of rock-paper-scissors on a last-ditch Zoom call that afternoon.

“We wanted to win it outright,” Fry wrote in an email.

Big Red wasn’t able to pull off an unblemished 7-0 Cinderella run in postseason play, but it was still grateful for the SiriusXM Mascot Bracket and the competitive spirit it rekindled at WKU.

“Although the National Championship matchup unfortunately tilted away from us, there was no doubt that Hilltopper Nation made a statement: The WKU Spirit is a force to be reckoned with, and together we can compete with any other program and fan base in the country,” Big Red wrote in a letter to its supporters published by WKU Athletics on Thursday, April 23.

Bowling Green, Warren County, Kentucky and even previously defeated mascots all teamed up to help Big Red in its quest for mascot supremacy, prompting WKU associate athletic director for communications Zach Greenwell to reflect on “a silly poll with a silly ending” on April 17.

In a tweet posted to his personal Twitter account, Greenwell described his satisfaction with how an online mascot bracket brought the WKU fan base together, provided alumni a chance to get involved with their alma mater and provided positive energy for the entire WKU community.

Hunt said the SiriusXM Mascot Bracket was a welcomed distraction for him during quarantine.

“I would rather have actual sports going on, but it was fun to see this competition go down when we’re all not able to go to games,” Hunt said.

For the time being, another matchup between BYU and WKU will have to take place on social media. WKU athletic director Todd Stewart and BYU athletic director Tom Holmoe are actively working on changing that though, as the pair linked up to discuss “some future possibilities.”

“We would love to do a football and/or basketball series,” Stewart wrote in a tweet posted April 17. “The schools have never played in football and @WKUBasketball leads the all-time hoops series 3-0 but we haven’t played since 1954. Let’s make this happen @TomHolmoe!”

While reflecting on the whirlwind that was the SiriusXM Mascot Bracket, Fry made sure to thank fans for sharing pictures and videos of their personal interactions with Big Red in the replies on Twitter, as their replies to the polls showcased “The Spirit of Western” Big Red represents.

“I’m happy with the journey through the bracket, regardless of the outcome,” Fry wrote in an email. “It was one wild time. We had a blast campaigning for Big Red and creating content from it …  I think a lot of Twitter outside of the Bluegrass got to see Big Red for the first time.”

“Big Red represents the spirit of WKU,” Fry continued. “There’s not many things stronger than that on this planet! We are very appreciative of our fans for showing up to the polls on Twitter.”