Farewell from the Hill: Seniors reflect on and say farewell to their time on the Hill 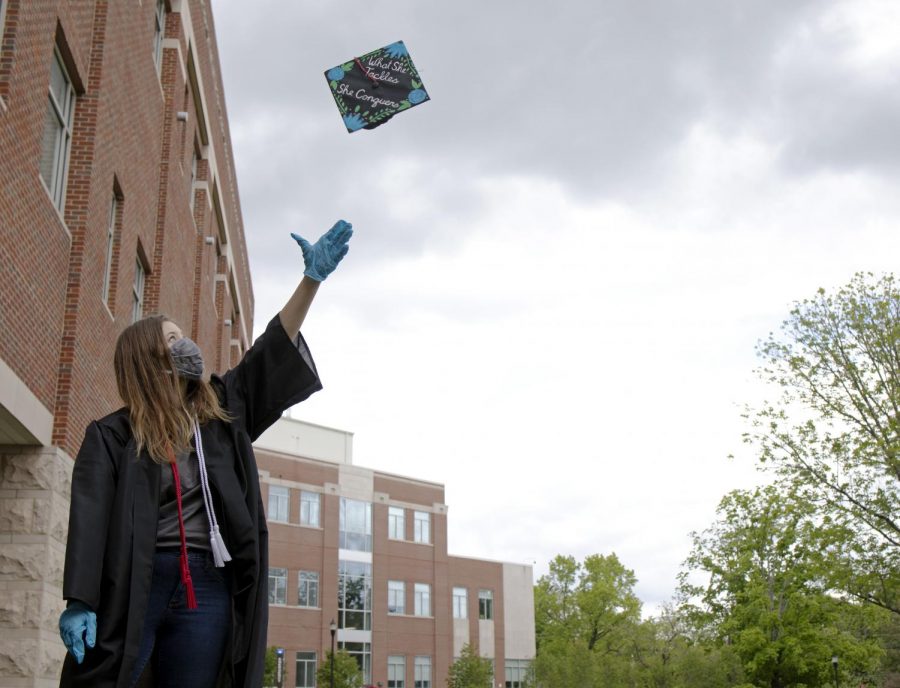 Spring Hill, Tn senior Sabrina Adams will complete her exercise science degree in isolation. “I did get a cat,” Adams said, “that’s the best thing out of all of this.” Despite an anticlimactic end to her college career, Adams finds the silver lining to her new situation.

This story was published in the May 8 final print issue. Read the full issue here.

Seniors across the nation had their last semester of college cut short, and WKU was no different. Hilltoppers received an email on March 11 stating spring break would be extended to March 22 and the two weeks after that classes would be moved online rather than on campus. However, in less than one week, WKU President Timothy Caboni announced classes would be delivered by alternate formats, rather than in-person, for the remainder of the semester.

Most students were disappointed and many had to move from their dorms with short notice. There are few — if any — who were not disappointed by the call to end in-person classes for the remainder of the semester.

“If you would have told me for my last three months of senior year I would be back in my childhood home, I would have laughed in your face,” Remi Mays, a public relations senior from Bowling Green, said with a laugh.

Many students decided to stay in their Bowling Green apartments, and some, like Rebecca Green, have gone back and forth between their family homes and their school residences.

Green, a communication studies senior, was at home in Mayfield for her April birthday. Her mom made her favorite meal, but if the coronavirus hadn’t changed her plans, Green would have gone with her fiancé to Gondolier, a restaurant in Glasgow that serves her favorite cheesecake.

“I’m missing the memories that could have been,” E.J. Fields, a senior at the Gatton Academy of Mathematics and Science, said. For now, the academy, which is housed on WKU’s campus, has postponed its senior prom, senior night and graduation.

While Fields may not have to miss his prom, many seniors in both high school and college are missing memories that might have been.

For Wood Brown, a history and economics senior from Princeton, if the coronavirus hadn’t cut his last undergraduate semester short, he would be helping run Greek Week.

“For a lot of people, Greek Week is the exclamation point on the year,” he said. “Everybody was working real hard, and it just kind of dissipated.”

Sabrina Adams, an exercise science senior from Spring Hill, Tennessee, is in the Delta Zeta sorority and was a co-chair for the Jeopardy game that would have been played during Greek Week this year.

“One of my goals this semester was to spend more time with my friends, and now it’s like I can’t see anyone,” Adams said.

Adams’ roommates are in and out of the apartment, but she does have her new cat, Luna, to keep her company. A cat was going to be her graduation present, but since the COVID-19 pandemic has tentatively postponed graduation to September, she decided to adopt Luna sooner.

Mays also got a new pet in quarantine, and it seems nearly every time you get on social media, someone else has gotten a new pet. Mays recently became the owner of a golden retriever puppy named Flynn who has his own Instagram account.

In addition to potty training her new puppy, Mays has also been learning Italian and reading novels when not doing school work. After graduation, Mays planned to visit Europe but has obviously had to cancel her plans. However, she’s hoping her chance to learn some Italian will boost her experience when she finally gets to visit Italy.

“When I do travel to Italy, I’m going to blow them all away,” Mays said with a chuckle.

Mays, like other seniors, has had to cancel plans. Most were planning big trips or final campus bucket lists. Green was looking forward to visiting Boston for an entrepreneurship contest and Scotland in the summer for an internship.

Despite the many losses of senior year caused by the coronavirus, these seniors still have things to look forward to. Mays will be re-planning her European trip, Brown will attend law school in Louisville in the fall, Green (who got engaged at the kissing bridge on the top of the Hill on Friday) can now begin wedding planning while also job hunting, Fields will begin school at the University of Kentucky and Adams will begin physical therapy school at WKU in June.

These seniors, though missing out on what they hoped their last semester might look like and the closure that comes with it, have also made great memories on the Hill.

“It’s a university that depends on student life,” Brown said. “Western is truly a living and breathing campus.”

One small thing that Green missed was her walk to class every day. It was “the most peaceful part” of her day.

College is also where people make lifelong friends. Many seniors remembered and missed hanging in hammocks with friends on campus. Others remembered the parties, especially the formals and dances. Basking in the sun on the Colonnades with friends was a favorite pastime.

Adams, Brown, Green and Mays all had advice for the underclassmen, especially the incoming freshmen whose high school senior year was also cut short. They agreed college is what you make of it, and you should make the most of it and take every opportunity to be involved. Mays also recommended getting an internship.

College wasn’t just a place to grow academically for these seniors. It was a place to form friendships, find new interests, learn about different people, cultivate new skills and so much more.

“I think it turns a lot of people into better people,” Brown said.

Commencement ceremonies have been postponed tentatively to September. Seniors will soon get to say goodbye to friends, to professors and to their forever home on the Hill.