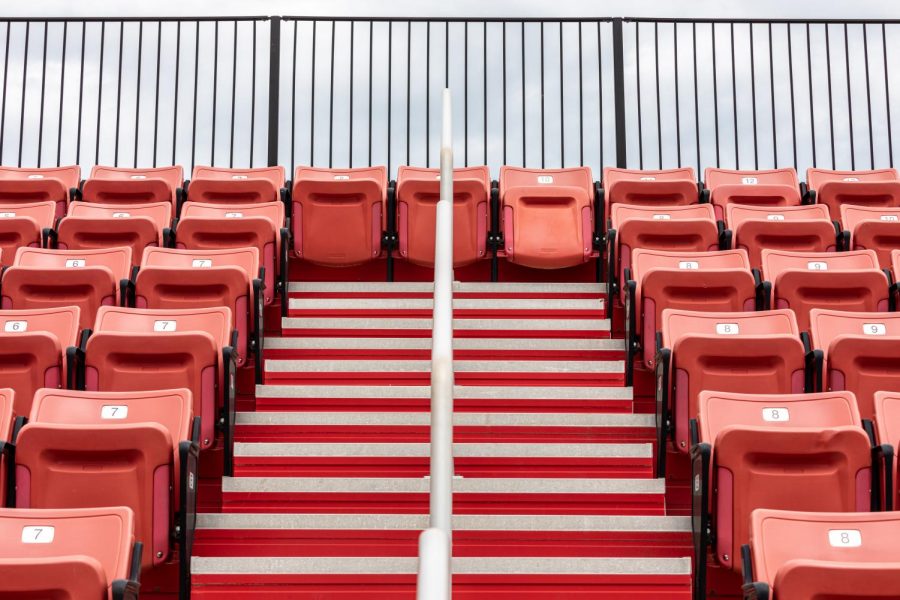 Seats are empty at Nick Denes Field after the baseball season ended prematurely due to COVID-19.

The COVID-19 pandemic has affected nearly every aspect of everyday life in the United States, including sports at all levels of competition. WKU Athletics is no exception, and the department has been working overtime to deal with the punches the coronavirus has already thrown at it.

Although the coronavirus has already had a severe impact on WKU Athletics — including an abrupt end for winter sports, the cancellation of spring sports, an added year of eligibility for spring sport student-athletes and salary reductions for coaches and administrators — more items may soon be added to a growing list of ramifications all Division I programs must face.

WKU Athletics has already faced an unprecedented number of curveballs since mid-March, and the list of possible concerns that the department will need to address in the future continues to grow larger and larger as an end to the ongoing pandemic continues to stretch further away.

Many multifaceted issues may crop up for WKU Athletics in the near future, but a long list of events have already shaken up in the world of intercollegiate athletics for the university:

March 11: Just before March Madness was set to get going in full swing, Conference USA announced the final three days of its men’s and women’s basketball tournaments would be closed to members of the general public. Later, the NBA suspended play while WKU legend Courtney Lee and his Dallas Mavericks were in the middle of a primetime game on ESPN.

March 12: One day after closing the C-USA Tournament to the public, the league cancelled the remainder of the event before suspending all spring sport competition just 58 minutes later. The NCAA then canceled its men’s and women’s basketball tournaments in addition to calling off all of its remaining spring and winter championship events.

March 16: The C-USA Board of Directors reached a unanimous vote to cancel all spring sport competition and championships for league institutions.

With the list of obstacles facing the department growing steadily, WKU Athletics will be tasked with maintaining fiscal standards while continuing to educate and develop student-athletes.

The NCAA will distribute just $225 million to Division I schools in June, which is less than half of what it had previously budgeted, according to ESPN’s Mark Schlabach. According to a report by The Virginian-Pilot, C-USA “estimates it will give $1 million less to member institutions this year,” while money from “ticket sales, gifts and corporate sponsorships” could decline 20% nationwide.

In light of the NCAA’s decision to give additional eligibility to spring sport student-athletes, ODU will incur a cost of “approximately $500,000.” Stewart told the Bowling Green Daily News WKU has started bracing itself for added expenses and decreased revenues, as extra eligibility was awarded “without extra money” for schools, according to The Atlanta Journal-Constitution.

Department spokesman Zach Greenwell gave some insight into the university’s ever-evolving plans to combat the effects of COVID-19 on WKU Athletics in an email to the Herald.

“There are numerous factors that are fluid and constantly changing through these trying times that will affect our budgetary strategies moving forward,” Greenwell wrote in the email. “Like the university as a whole, we plan to share some of those fiscal plans in the coming weeks in greater detail. WKU Athletics is also actively engaged in the information-gathering and preparation stages as one of four Restart WKU Committees.”

WKU has already started cost-saving efforts to address its “current budgetary challenges,” as Stewart, Stansbury and Helton — the highest paid members of the athletic department — “voluntarily accepted” 10% cuts to their salaries, saving the university $172,000 overall.

Greenwell confirmed the recouped funds will “go back to the athletic department to lessen the impact from other revenue shortfalls, specifically decreased NCAA disbursements related to the NCAA Tournament, on individual programs and student-athletes.”

“The American spirit is people rallying around each other in times of need,” Stewart said in a statement. “In our lives, all of us are likely to need help from others at some point. This event has been unprecedented and its impact on so many has been staggering. We are in a position where we can do this, and I know many people throughout the nation are making similar sacrifices. We all look forward to better days ahead.”

WKU Athletics has experienced $6 million in total budget reductions since 2012, including the elimination of men’s tennis and its men’s and women’s swimming and diving programs.

More budget reductions could be coming to WKU Athletics soon if recent cuts at the University of Louisville — which faced “15% cuts in sports budgets,” according to ESPN — are any indication. Those cuts could include the elimination of more WKU programs if the NCAA ever decides to relax its minimum sports sponsorship requirements for Football Bowl Subdivision members.

For Group of 5 schools, which includes programs from the American Athletic, Mid-American, Mountain West, Sun Belt and C-USA, meeting the minimum requirements to maintain FBS status is already more difficult than it is for Power 5 conference members, and COVID-19 has only compounded the difficulties smaller institutions face when trying to play from behind.

On Tuesday, April 14, a letter Group of 5 commissioners wrote to NCAA president Mark Emmert was obtained by Yahoo Sports’ Pete Thamel. The letter, signed by each commissioner, asked for “temporary relief from several regulatory requirements for a period of up to four years.”

Among other items, the request included reducing the minimum number of required team programs from the current 16 programs to 14 or 12 programs, waiving football attendance requirements and also introducing changes to scheduling and financial aid requirements.

The NCAA Division I Council announced Friday, April 24, that it had denied a blanket waiver for “sport sponsorship minimums.” But universities will retain the ability to submit “sport sponsorship requirement waivers on an individual basis,” leaving the door open for more programs to be cut, just as men’s soccer at the University of Cincinnati and wrestling at ODU already have been.

“Higher education is facing unique challenges, and the Division I leadership believes it’s appropriate to examine areas in which rules can be relaxed or amended to provide flexibility for schools and conferences,” Council chairwoman and University of Pennsylvania athletic director M. Grace Calhoun said in a release.

Still, the elimination of programs at WKU would be difficult. Title IX doesn’t require identical programs for males and females, but cutting more programs could land a university that’s already involved in a Title IX investigation related to baseball and softball in hot water.

The NCAA specifically mentioned scheduling as an item to be considered in the near future, and C-USA is already making moves to address potential issues. According to ODU, ODU athletic director Wood Selig is chairing the Futures Planning Committee, which the league is using to consider “a series of changes to regular-season scheduling and its championships.”

“Can you imagine being Conference USA or the AAC and you’re sending your baseball team to UTEP or Tulsa,” an unnamed athletic director in a non-football league asked Thamel on April 14. “It doesn’t make any sense. Much like everything, we’ve done this to ourselves. For us to not think about regional scheduling alliances is complete lunacy.”

Another major concern for WKU and the revenue its athletic department will be able to generate during the upcoming fiscal year is a potential adjustment to the 2020 college football season.

Stadium sent out a survey to all 130 FBS athletic directors, and 99% of the 114 respondents believe college football will be played in some form, with just 1% believing games won’t be played at all, college football insider Brett McMurphy reported on Wednesday, April 22.

Although FBS athletic directors are still optimistic about the prospect of games being played at some point in 2020, Ramogi Huma, the president of the National College Players Association, told Sports Illustrated, “It’s extremely hard to imagine any football in the fall on any level.”

If the WKU football team was unable to take the field at all next season, the loss of revenue associated with the program would be devastating to the athletic department as a whole.

Even if the 2020 college football season takes place, the possibility of crowdless stadiums at least for some portion of a typical 12-game schedule looms large. Potential games played in Houchens-Smith Stadium with no fans would carry a large loss of revenue from ticket sales.

Another idea being floated around is an eight- or nine-game conference-only schedule, which would essentially preclude Group of 5 and Football Championship Subdivision schools from playing non-conference guarantee games against the typically wealthier Power 5 schools.

Hilltopper football collected an even $2 million in guarantees during the fiscal year ended June 30, 2019, but that revenue stream could dry up if WKU only faces C-USA opponents. Without football, WKU could also lose revenues from summer camps, a bowl game and other areas.

“The 2020 football season is one of the numerous factors I referenced previously as extremely fluid to this point,” Greenwell wrote in an email. “Anything further would be conjecture at this point. However, we’re creating plans and contingencies for different return timelines for all of our sports, not just football.”

Caboni previously announced the four Restart WKU Committees reporting to the university’s COVID-19 Task Force, including an Athletics Committed led by Stewart, but there haven’t been any announcements made regarding potential COVID-19 budget cuts for WKU Athletics.

The Board of Regents will conduct its second quarterly meeting on Friday, May 15, and issues related to the coronavirus, including the future of WKU Athletics, are likely to be discussed.

“I don’t know what the fall semester will look like,” Caboni said in a release. “Regardless of what it holds, our institution will be successful because of its people. We will harness the creativity of the WKU community to think differently about how we accomplish our mission, and we will be prepared for any eventuality.”