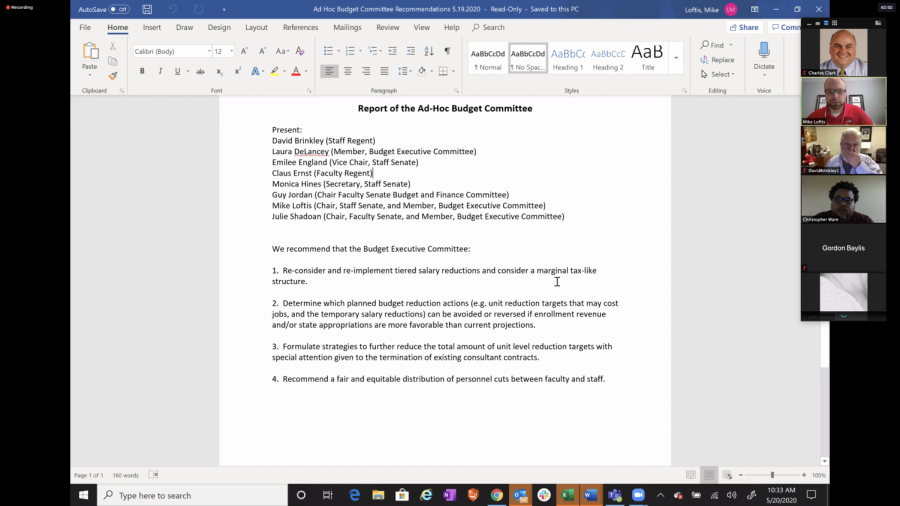 Screenshot of a Zoom Staff Senate meeting on May 20.

The WKU Staff Senate is joining its faculty counterpart in asking the university administration to move forward with temporary, tiered salary reductions for the coming year to address a portion of WKU’s budget crisis and potentially save some jobs.

The goal, staff senators said, would be to come up with $2.4 million in savings so that amount would not be added onto $8.1 million in cuts that must be made in units throughout the university. The recommendation, if also adopted by the Faculty Senate, goes to the WKU Budget Executive Committee.

Those cuts are part of an overall $27 million budget shortfall WKU projects for 2020-21, largely because of the financial impact of the global coronavirus pandemic. The university expects an enrollment decline of 5%, and expects the state of Kentucky to cut its funding to WKU by more than $7 million.

“What we plan to do is have a joint recommendation to send back a suggestion to the BEC to revisit the tier salary reduction and to possibly have it reworked in a different manner,” said Staff Senate Chair Mike Loftis, who works in information technology.

Staff senators said they were concerned that, if the $2.4 million is added on top of the $8.1 million in cuts that are to be assigned to units throughout WKU, it would result in a larger number of jobs being eliminated.

“I think we are kidding ourselves if we don’t think there will be job losses,” said Staff Regent David Brinkley. “I don’t like to sugarcoat this. I’ve been criticized for saying this, and frankly I don’t care. This is important stuff. It’s going to affect everyone.”

Brinkley said he is concerned that the higher cuts would result in a disproportionate amount of the cuts being made at the expense of staff jobs. He suggested that, within the Division of Academic Affairs, every staff job lost be matched with a faculty position cut to spread out the burden.

“I feel like the staff have already in many ways paid their dues,” he said, noting that more than 120 staff jobs were eliminated two years ago in budget cuts.

Staff senators also endorsed a provision calling for pay cuts to be reversed if enrollment is higher than expected, or if the state does not cut as much as the university expects.

Along with the vote supporting the committee report, staff members who are not part of the Staff Senate were encouraged to ask questions and put their opinions out on the table.

“All we are trying to do is make sure that there is an equitable consideration and distribution of responsibility,” Brinkley said.