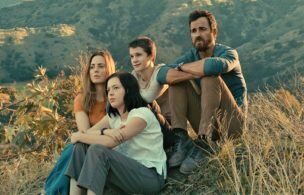 Justin Theroux is serving up some heart-pounding thrills in the first trailer for Apple TV+’s The Mosquito Coast.

Adapted from the best-selling novel by Paul Theroux — Justin’s uncle — The Mosquito Coast‘s first two episodes arrive Friday, April 30, and the new preview teases plenty of excitement. The series follows Allie Fox (Theroux) and his family who find themselves on an unexpected adventure when he suddenly uproots their lives. A “radical idealist” and “brilliant inventor,” Allie brings his family along when he has to make a run from the U.S. government, resettling them in Mexico. In the trailer, the Fox family enjoys a seemingly ordinary life until the government gets on their trail.

“Everything’s complicated, but there’s always a solution,” Allie muses in some voiceover. His daughter has a less idealistic outlook, though. “Not everything can be fixed,” she says.

But Allie doesn’t accept that outlook as he says, “of course it can, the trick is actually wanting to fix it.” Allie then sets the tone for their adventure, telling his family, “what’s about to happen may seem like imperfect parenting. This is gonna be an adventure.”

Joining Theroux in the cast are Melissa George, Logan Polish, and Gabriel Bateman who make up the rest of the Fox family. See the exciting action unfold in the trailer below, and don’t miss The Mosquito Coast‘s TV debut later this month.