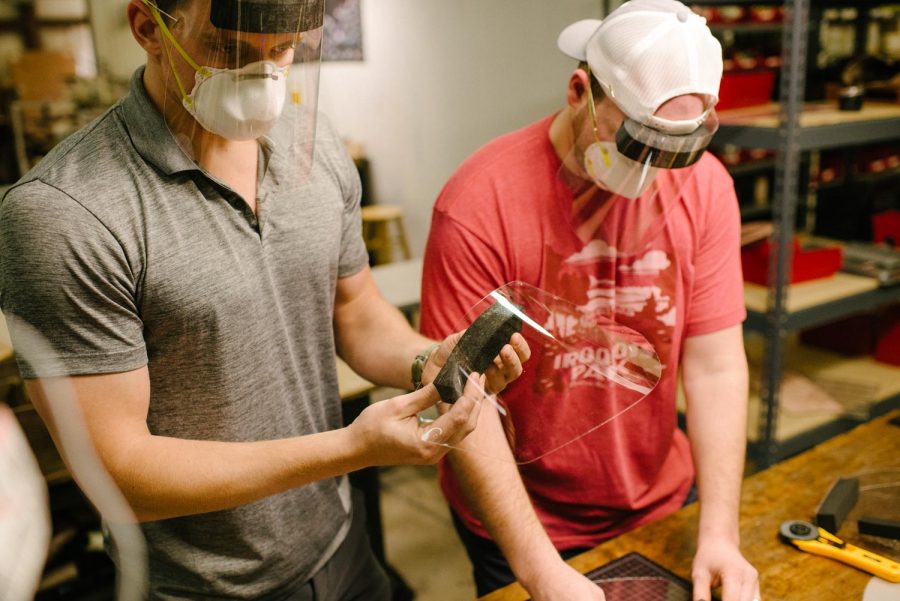 Submitted by Clayton and Crume

Two weeks ago, Clayton and Crume, a Kentucky-based leather goods manufacturer, was a business focused on creating wallets, belts and “fulfilling the needs” of its customers.

But two weeks ago, those needs were creating a new tote bag or replacing a falling-apart wallet.

In the time of the COVID-19 pandemic, when there is a national shortage of personal protective equipment and medical gear, Clayton and Crume has revamped its workspace to cater to the medical community’s needs: creating reusable face shields for medical personnel.

Now, the company is tasked with building 600,000 for the state of Kentucky in six weeks.

Fronted by two WKU alumni, Clay Simpson and Tyler Jury, Clayton and Crume was established to fill needs in the community. Though at the time, Jury said those needs were more “wants.”

“Last week, we saw a need for PPE and a shortage in a crisis,” Jury said. “…Ultimately, we saw something that we felt like needed to be made.”

Like other small businesses, Clayton and Crume was forced to make cuts “across the board” in response to coronavirus concerns.

Leaving the Louisville storefront open “wasn’t safe” and “wasn’t smart,” Jury said, and after Kentucky Gov. Andy Beshear announced the closure of nonessential businesses, the pair needed to make decisions to ensure the business could survive the downtime.

Simpson and Jury decided to take the week to plan and create prototypes for future designs, but Jury said they missed the “hustle and bustle” of their daily routine.

They decided to create face masks to donate to local hospitals.

“Our friends who are in healthcare are being asked to reuse their masks,” Simpson said. “Something that used to be disposable is now something that you cherish and you clean and you take care of because you don’t know if you can get another one.”

After collecting fabric from friends and family, they sat down at sewing machines and quickly realized these efforts could help, but not at the capacity they’d like to.

The machinery Clayton and Crume already had was better equipped to create protective face shields rather than masks, Jury said. After the pair developed a prototype, they shared their plans with medical administrators. The word began to spread to larger hospital systems, and eventually led to the request from the governor’s office.

Within three days of announcing the company’s plan to start production on shields, the pair received requests for “millions of masks.” The leather making workshop wasn’t built for the amount of protective shields the company was planning to produce.

They signed a lease for a new space, which Simpson dubbed “the shield shop.” A new, separate space for the shields will also allow them to keep the work area sanitized and safe.

Though there are a number of differences between the production of leather goods and face shields — primarily the medium of plastic rather than leather — Jury said the “essence” is the same: cutting, assembling, designing and packaging.

“It’s nice to be able to use the skills you have and the tools that you have at your disposal to give back — to give something to the community that is needed,” Simpson said. “This isn’t belts. This isn’t like … ‘I want this,’ needed, this is ‘people are dying’ needed.”

The face shields are reusable and built to withstand cleaning, bleaching and whatever is needed to be sanitary. Creating durable products made of quality materials is the “bottom line” of the business, Simpson said.

“I think if you gave a nurse a shield with a hole in it and a shoestring, right now they would take it,” Jury said. “But we’re trying to make something that has a little bit better longevity than what you might just throw together out of materials you have laying around in your garage.”

Clayton and Crume usually employs about 30 people, but if the depth of orders the company receives is as high as anticipated, Simpson said there would be enough work for more.

The transition from focusing their business on leather goods to face shields also proves beneficial to the Clayton and Crume staff who are able to maintain jobs in what would have been a downturn, Simpson said.

Though the company’s leather goods will still be available for purchase online, Simpson said the majority of the attention would be focused on the shield shop, and their attention wouldn’t be diverted until the need for face shields goes away.

“I wish there wasn’t a demand for face shields right now,” Simpson said. “I don’t think the situation is anything that anyone would have hoped for. And maybe in six weeks when we’ve finished the bulk of our manufacturing effort, there won’t be a need.”

But Simpson said he and Jury were looking at the reality of the coronavirus situation.