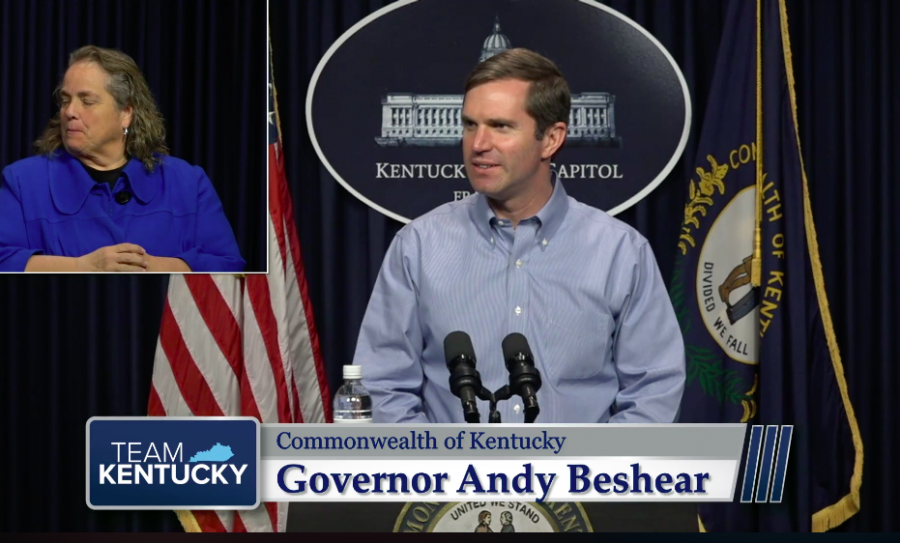 Gov. Andy Beshear during a daily coronavirus update on April 1.

Gov. Andy Beshear reported 93 new cases of COVID-19 in Kentucky at the time of today’s update, which was less than yesterday’s reported new cases. He announced four new cases in Warren County.

Beshear also reviewed the 10 steps for defeating COVID-19 and encouraged Kentuckians to complete an additional eleventh step: completing the census.

Beshear insisted completing the census now would help Kentuckians later as aid is prepared in wake of the novel coronavirus pandemic.

“This is going to make rebuilding and restocking and moving forward much easier if we have everybody – and I mean every household across Kentucky – doing this,” Beshear said.

Without intervention or social distancing, the graph showed an estimate of 21,000-29,500 deaths in Kentucky. With intervention, however, the graph estimated 1,300-3,200 deaths. Beshear called this a “somewhat optimistic scenario.”

When talking about the benefits of social distancing, Beshear warned of the nice spring weather expected for the upcoming weekend.

“We can not repeat last weekend where we saw lots of people come together,” Beshear said.

Josh Benton, from the Kentucky Education and Workforce Development Cabinet, addressed issues Kentuckians may be having in filing for and claiming unemployment and unemployment insurance.

Benton said the first payment is automatic, so recipients will not have to inquire about their payments. All questions regarding these issues can now be directed to kcc.ky.gov, Benton said.

Beshear announced members of the Kentucky National Guard are now being deployed to food banks across the state to “help feed seniors, families and displaced workers.”

There will be 70 members dispersed among four food banks in Louisville, Elizabethtown, Wilder and Lexington.

Again, Beshear and Stack warned people should not be paying for testing, and Kentuckians should be using the recommended websites, hotlines and, if necessary, healthcare providers.