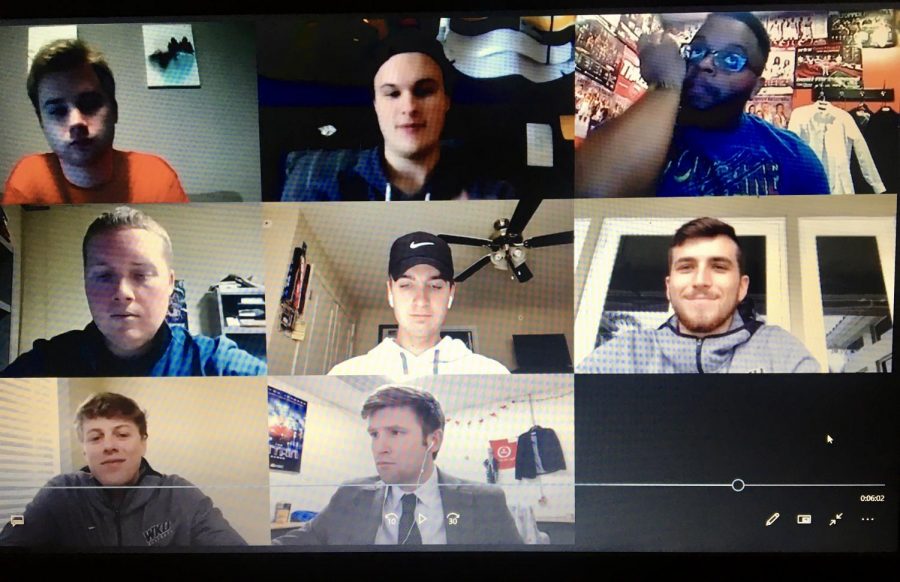 The WKU baseball team participates in a Zoom conference call with local media on Thursday, April 16 to discuss how the coronavirus pandemic has impacted the Hilltopper baseball program.

Just two days after a 10-4 loss at in-state rival Kentucky on March 10 and a day prior to its Conference USA opener at Alabama-Birmingham on March 13, the WKU baseball team’s young 2020 season was brought to a screeching halt by the coronavirus pandemic on March 12.

While the Hilltoppers were on a bus to Birmingham, Alabama, to meet the Blazers for their first league series of the campaign, the C-USA league office officially suspended all spring sport competition. The league’s suspension became a cancellation four days later, and just like that, a season that saw WKU open the year with a promising 10-6 record was cut painfully short on March 16.

Ever since then, the program’s players and coaches have found refuge in their respective homes, patiently waiting for the day they can all safely return to Nick Denes Field.

In mid-April, fourth-year WKU head coach John Pawlowski would typically be in the middle of the grind that comes with being the man at the helm of a Division I baseball program, but instead, he’s been at home taking advantage of the extra time he’s gotten to spend with his family.

Speaking to local media representatives in an online teleconference on Thursday afternoon, Pawlowski detailed how COVID-19 has impacted the Hilltopper baseball program.

With the team now spread out across many different locations, Pawlowski and his coaching staff have been forced to adapt. Social distancing has stopped in-person interaction for now, but the program has tried to make the most out of the situation using Zoom, a video chat application.

Meetings conducted using Zoom have become one aspect of a new normal for Pawlowski, who’s made it a point to continue checking up on the program’s players regularly.

“Well, the first thing was that we wanted to make sure we stayed connected with our players,” Pawlowski said. “The more and more you get into this [coronavirus] the challenge becomes how motivated are you? The biggest challenge for student-athletes is they have to continue to stay motivated, whether it’s in their school work or in their conditioning.”

Pawlowski, in addition to the rest of the team’s coaching staff and trainers, have stayed connected with the team’s players on Zoom. He said the calls are mainly focused on encouraging the players and making sure they’re staying conditioned and ready.

“It’s therapeutic for me to be able to see our players, see their faces, and to feel like we’re a lot closer than just a phone call and see them,” Pawlowski said. “It’s been a great experience to realize how much you miss what you do when all of a sudden you aren’t able to do that.”

Pawlowski has been in constant contact with his recruits, and he said a virtual option has been made available to him if prospective players are interested in being able to tour campus.

Pawlowski said he anticipates all eight of his seniors will be back next season. The NCAA announced it would grant spring sport student-athletes an extra year of collegiate eligibility on March 30, and MLB revealed its ability to cut its upcoming draft from 40 rounds to as few as five rounds on March 27.

“When I first got the news the season was canceled, Bailey [Sutton] called me and invited me over to his place,” Lambert said. “We sat on the couch and were just silent and in shock. I couldn’t believe my college career had ended so abruptly.”

Lambert said he was recently accepted into graduate school at WKU, where he will complete his master’s degree in recreation and sport administration with a concentration in intercollegiate athletic administration.

The infielder added that it was an easy decision for him to come back to WKU after the NCAA awarded him and his teammates an additional year of intercollegiate athletics eligibility.

Lambert noted that he wants to win a championship on the Hill, and Sutton said he believes the team will have an even better shot at attaining that goal with a larger roster and returning players in 2021.

“The more people, the more competition, the better,” Sutton said about the NCAA loosening its restrictions on baseball rosters. “What I enjoy is the competitive nature and fighting for a spot. I think in terms of competition, there will be a lot of maturity from the upper half of the team now.”

Both Lambert and Sutton have spent two offseasons staying around WKU working out with director of strength and conditioning Duane Hall to remain conditioned, and the duo has continued to perform the bodyweight programs that Hall has assigned to them during this period of social distancing.

“It doesn’t help to be weak in our sport,” Lambert said matter-of-factly.

Prior to the season’s premature end, WKU had posted its best non-conference record in four years under Pawlowski, and the Hilltoppers’ double-digit win total before March 7 marked the quickest run to the 10-win mark since the 1979 season. WKU had also collected four series victories early on.

Sutton said he thinks the 2020 team’s “core unit of guys and their chemistry was as good as it’s ever been,” which stings a bit for now, but also bodes well for the 2021 team’s future fortunes.

“Looking at how our season had started and the guys we had, it all felt too good to be true, then it just got ripped from behind us,” Sutton said. “Going into next year, that momentum will continue to transition over.”