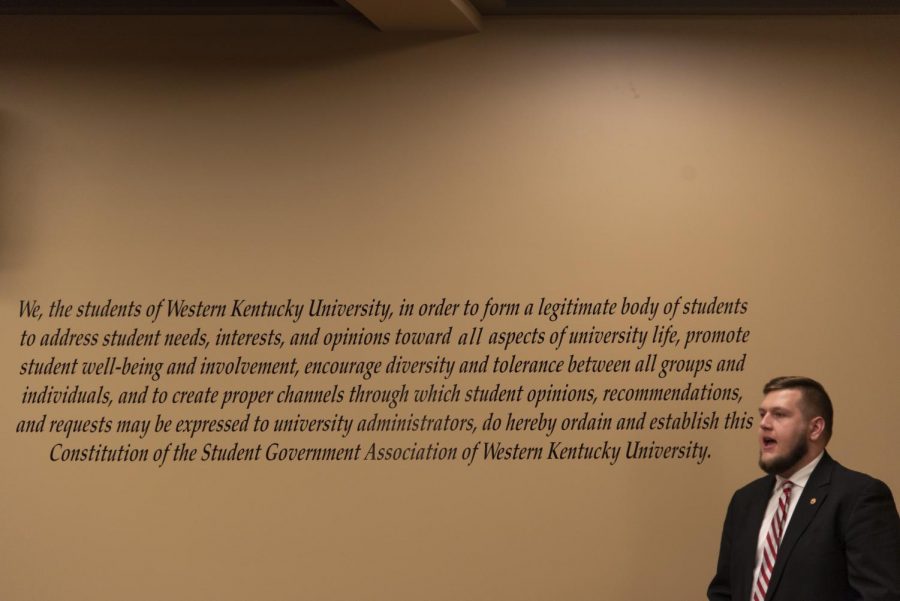 Student Body President Will Harris gives his president’s report during the SGA meeting on Tuesday, February 11.

The Student Government Association plans to postpone upcoming Spring elections until the Fall semester in response to campus facilities closing due to COVID-19.

Will Harris, Student Body President of SGA, said the organization’s election that was scheduled for this semester will not be held until at least September.

“We’ve decided to postpone the election until September, that way we can have in-person elections and this can be as equal as possible,” Harris said.

Garret Edmonds, Executive Vice President of SGA, said  the postponement came with the addition of an “emergency clause” amendment to the constitution that allows a future pathway for cabinet member terms to be extended until the following election, with judicial oversight.

“It’s mostly protective measures for the organization to be taking to ensure that in times like this we can be acting effectively and properly,” Edmonds said.

Despite being unable to meet in person, the SGA Cabinet continues to discuss topics over Zoom at 5 p.m. every Tuesday.

Harris said that discussions in Zoom have recently been about how the SGA can lessen the harm caused by COVID-19 on the student body.

“A lot of the discussion right now is how we can benefit the students the most in these difficult times,” Harris said.

Harris said that after scholarships have been awarded, the remainder of SGA’s budget will be donated to the WKU Opportunity Fund and Emergency Relief Fund and will be given directly to students in need of financial assistance.

Edmonds said that since campus’ closure, the SGA has donated it’s remaining food bank goods to the Office of Sustainability to be redistributed to students on remaining campus or nearby in need.

Edmonds said students who remain in the Bowling Green area should follow SGA’s social media posts for continuing information regarding other ways students in need can receive help.