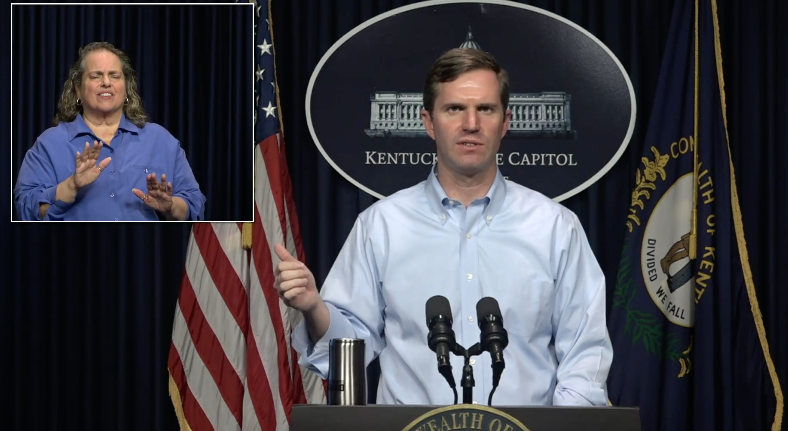 During his daily update Gov. Andy Beshear announced 92 new cases of the coronavirus in the state, including two new cases in Warren County, and further encouraged maintaining unity while staying physically apart.

Beshear emphasized the importance of social distancing and not gathering in large groups. He specifically brought up large gatherings in Louisville last night.

Amid the new cases and constant change, Beshear applauded the state’s unity throughout the outbreak. During the November elections, he said he felt the state was more fractured than he’d ever seen while now it’s the most united.

“United in that we know the adversary we face, and with this adversary we all, every single one of us, have to live up to our duty as a member of the Commonwealth and as a patriotic American to protect those around us more than ever,” Beshear said. “We are connected to each other.”

Today, the state also received a major disaster declaration from the federal government which will help cover up to 75% of certain costs and enable FEMA to reimburse the state for the cost of measures taken to protect public health. This could include the State Health Emergency Operations Center, disinfecting facilities, providing temporary medical facilities and more.

Additionally, Beshear announced changes to unemployment from a recent agreement with the Department of Labor. The agreement raises the maximum weekly benefit by $600, increases benefit weeks by 13 for a total of 39 weeks, funds state unemployment benefits for those typically not eligible and allows the government to expand programs.

“We announced a lot of cases today,” Beshear said. “Let me say that the coronavirus isn’t gonna last forever. We know it is temporary, but we know we got to be tough enough to take however long it takes. We will get through this.”