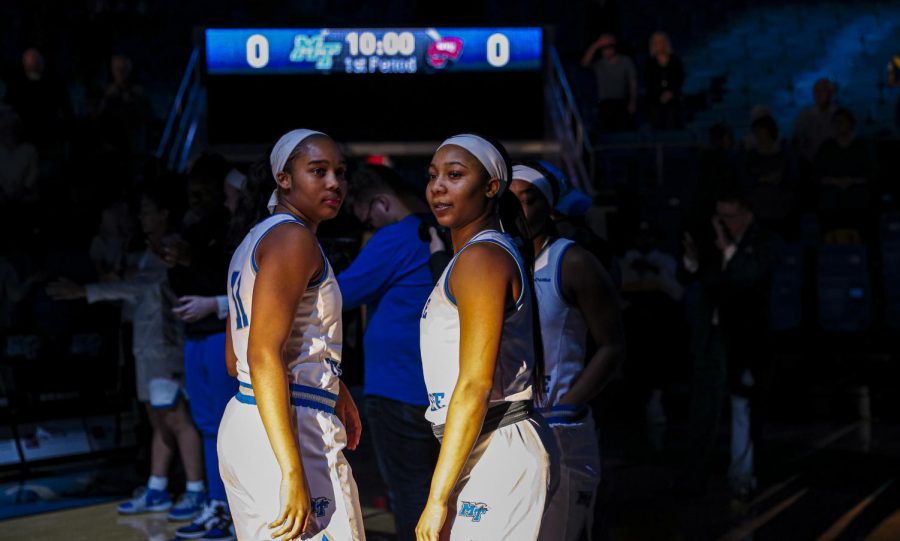 MTSU freshman guard Aislynn Hayes (11) and redshirt sophomore guard Anastasia Hayes (1) await the start of the Blue Raiders women's basketball game against WKU in the Murphy Center on Feb. 29, 2020. The Hayes sisters went on to accumulate a combined 62 points, 15 rebounds and nine assists in 99 minutes played between the two.

The WKU women’s basketball team (20-7, 12-4 C-USA) had its 10-game winning streak snapped against Middle Tennessee State (19-9, 11-5 C-USA) on Saturday evening, as the Lady Toppers lost a 108-103 decision in double overtime in the Murphy Center in Murfreesboro, Tennessee.

WKU’s final road game of the regular season was a battle between two of the top four teams in the Conference USA standings, and it proved to be an instant classic. The Lady Toppers forced two overtime periods, but MTSU outscored WKU 17-12 to claim the sixth and final frame.

Head coach Greg Collins had guided WKU to its first double digit winning streak since the 2016-17 season, but his 2019-20 squad stumbled in the first double overtime game between WKU and MTSU since a 70-68 away win for the Lady Toppers on Feb. 5, 2004.

“I’m really proud of the effort that they gave,” Collins said postgame. “They played hard, but we didn’t play well. We got some players that are more worried about being officials than being basketball players, and until they stop and focus on what they are supposed to do as basketball players then they’re limited as to how good they are going to be.”

The Lady Toppers struggled to get production from their reserves, as the WKU bench was outscored 26-8 by the Blue Raider bench. WKU did give MTSU some trouble in the passing lanes, notching eight steals to double the Blue Raiders’ total of only four.

Redshirt senior guard Alexis Brewer produced a career-high 28 points for the Lady Toppers in 45 minutes, netting 4-of-7 shots from beyond the arc. Redshirt senior forward Dee Givens followed Brewer with 24 points and six rebounds in 43 minutes.

Junior guard Sherry Porter returned from an MCL injury against MTSU. She played 28 minutes, grabbing three rebounds and scoring just one point in her comeback game.

The Blue Raiders barely came out on top in the rebounding and inside scoring battles, defeating WKU by a razor-thin 54-53 margin on the boards and 60-54 in the painted area.

The Hayes sisters dominated the contest for the Blue Raiders, as freshman guard Aislynn Hayes and redshirt sophomore guard Anastasia Hayes combined to accumulate 62 points, 15 rebounds and nine assists in 99 minutes played between the two.

Redshirt sophomore forward Rellah Boothe and sophomore guard Alexis Whittington were the only other double-figure scorers for MTSU, adding 15 and 11, respectively, off the bench.

Anastasia Hayes opened the game with a layup that put MTSU up 2-0. Both teams traded buckets from there, resulting in a 4-4 tie with 8:29 left in the first quarter.

Following a layup by freshman forward Courtney Whitson, the Blue Raiders jumped out to an 8-4 lead at the 7:34 mark in the first quarter.

Creech helped WKU get back into the scoring column, draining a pull-up jumper to cut the WKU deficit to 12-9 with 5:35 left to play in the opening quarter.

MTSU jumped out to a 4-0 scoring run and gave itself a 16-9 lead, but Givens answered back with a 3-pointer to make the score 16-12 at the 4:16 mark. The Lady Toppers and MTSU battled back-and-forth during the closing minutes, resulting in a 21-19 deficit for WKU after one period.

Aislynn Hayes increased the Blue Raider advantage to 23-19 with 8:23 left to play in the second quarter, but WKU stormed back with a 6-0 run that gave the program its first lead of the game.

The scoring outburst gave the Lady Toppers a 25-23 lead with 6:25 to play in the second quarter. MTSU answered yet again, mounting a 4-0 scoring run that helped the Blue Raiders seize a 27-25 lead over the Lady Toppers with 5:40 to play before the halftime break.

Whittington produced a personal 5-0 scoring run for MTSU with under a minute to go before halftime. The Blue Raiders finished the second quarter by making five of their last seven field goal attempts overall, which allowed MTSU to carry a 40-32 lead into the locker room.

The Lady Toppers got into the scoring column first in the third quarter, as Elgedawy swished a free throw to make the score 40-33 with 9:48 left in the third period.

Following a pair of back-to-back layups by each of the Hayes sisters, the Blue Raiders found themselves up 44-34 with 7:27 left to play in the third frame.

After a steal by redshirt freshman guard Myriah Haywood, Elgedawy finished a fastbreak with a layup to cut the WKU deficit to single digits at 46-37 with 6:07 left in the second quarter.

MTSU soon found itself in foul trouble, as both Whitson and senior forward Charity Savage had racked up four fouls each.

Brewer cashed in on a trip to the charity stripe, converting a pair of three throws to trim the MTSU advantage to 10 with 4:42 left to play in the quarter, 49-39.

Boothe soon converted a layup, and the Blue Raiders possessed their largest lead of the night at 53-40 with 1:46 to play in the third quarter.

The Blue Raiders went into the fourth and final frame with an eight point lead, leading the Lady Toppers 55-47 after three periods. WKU came into the decisive quarter on fire, as Brewer drained a pair of 3-pointers to bring the Lady Toppers back within four points at 59-55.

The Lady Toppers went on to mount a combined 13-2 scoring run, taking the lead back from the Blue Raiders at 60-59 with 7:53 left to play in the game.

Abdelgawad grabbed a steal and she finished a fastbreak with a layup which tied the game at 63-63 with 5:51 left to play in the final quarter.

Brewer cut the game to a single-possession contest at 68-65 after netting another pair of free throws at the charity stripe with 4:54 left in the game.

The Lady Toppers capped a 9-0 scoring run after Givens converted an and-one play at the line, giving WKU a 74-73 lead over the Blue Raiders with 1:55 left to play in the game.

Brewer surpassed her previous career-high points with 23 after a pair of made free throws, which also tied the game at 76-76 with 58 seconds left to play in the game.

Forty minutes of regulation wasn’t enough to decide the contest, as the score remained tied at 76-76 until the final buzzer sounded. The horn sent the game into an overtime period, which remained tied at 78-78 early after Anastasia Hayes and Brewer both converted layups.

Givens gave the Lady Toppers an 80-79 lead after she drained a jump shot with 3:35 left to play in overtime. Boothe fouled Elgedawy on a layup, which disqualified her for the rest of the game.

Elgedawy missed the free throw, but she grabbed her own rebound and converted the second-chance bucket to give WKU an 86-83 lead.

Aislynn Hayes sunk a 3-pointer with two minutes to play, tying the game at 86-86. Brewer then sank a free throw to give the Lady Toppers an 87-86 advantage with 51 seconds remaining.

Anastasia Hayes hit a layup, giving the advantage back to MTSU at 88-87 with 43 seconds left to play. Brewer banked in a running 14-foot jumper to give WKU the lead at 89-88 with 30 seconds remaining in overtime.

Creech swished two shots from the free-throw line with confidence as the clock read 0:00, sending the game into a second overtime period.

WKU headed into the second overtime with a lot of confidence after making 5-of-6 field goals to end the first overtime period.

The Lady Toppers were ice cold throughout the double overtime period. WKU started the period by missing all of its shots until Skinner hit a free throw at the 3:27 mark.

Sutton became the fourth Blue Raider to foul out of the game, and then Creech drained a layup to make it a one possession game at 97-94 with 2:37 remaining in the period.

Aislynn Hayes sank a fast break layup, giving MTSU a 99-94 advantage over the Lady Toppers with 2:03 left to play.

Whittington broke the century mark for MTSU with a layup, making the score 101-94 with 1:25 left to play in the second overtime period. Elgedawy soon notched her fifth foul, which kept her on the bench for the remainder of the game.

Givens converted a layup to cut the Blue Raider lead to six at 102-96 with 59 seconds remaining in the period, but she picked up her fifth and final foul soon afterward.

The Hayes sisters essentially iced the game for MTSU at the line down the stretch, netting a combined seven foul shots after the 1:06 mark.

Creech hit a 3-pointer to make the score 105-101 with 17 seconds remaining, but clutch shooting at the foul line secured a five-point win for the Blue Raiders in double overtime.

Both games will be available on CUSA.tv.