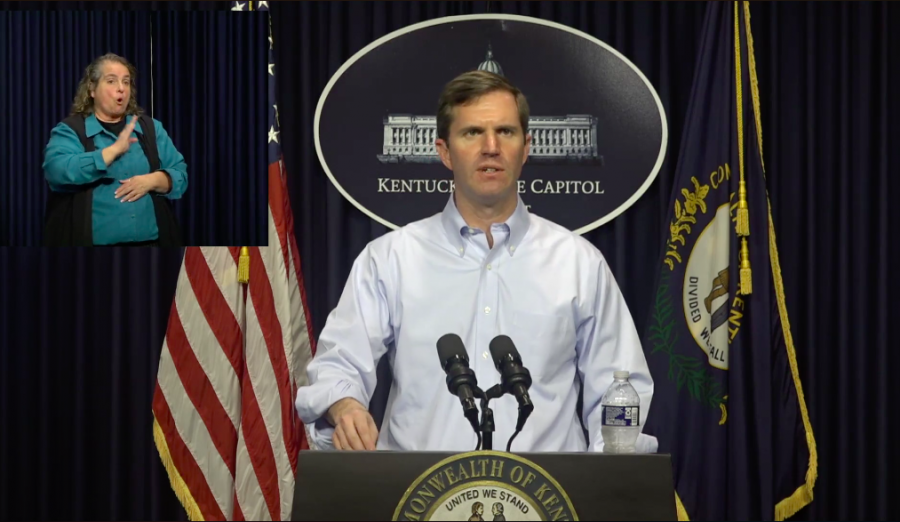 Kentucky Gov. Andy Beshear gives a daily update on the coronavirus situation in the state on March 18, 2020. The update is available live on Facebook and Youtube.

Gov. Andy Beshear announced nine new cases of coronavirus in Kentucky in a press conference March 18. The total number of cases in the state is now 35.

At the beginning of the conference, Beshear announced three new cases, but during the conference he was alerted that six new patients had tested positive for the virus. One of these cases is the first case confirmed in Warren County.

One case includes an eight-month-old from Jefferson county. Beshear said the child is in good condition and is being treated at home. He added this is very rare for someone of that age.

These cases are located in Kenton, Fayette, Franklin, Warren and Clark counties with one other case in the WEDCO Health Department region. That case could be in Harrison, Nicholas, Scott or Bourbon county.

Beshear also announced he was working with medicaid in the state to ensure testing for coronavirus in Kentucky will be free when it is widely available and to arrange for free care for Kentuckians who are diagnosed with coronavirus.

Currently there are no plans to enforce a “shelter in place” mandate in Kentucky, which would enforce people staying in their homes except to perform urgent tasks. He also said there is no need to stock-pile food or household products because there was no issue in the food chain supply to grocery stores.

In Wednesday’s update, Beshear ordered all banks to close their public lobbies. Drive-thru banking will remain open. In the past week, Beshear has ordered several if not all public facilities to close or make alterations.

Restaurants and bars have been forced to either close or exclusively provide take out, delivery or drive thru services. Beshear has recommended as many businesses as possible have employees work from home.

“We got to take the steps right now because most people are asymptomatic or minor symptoms that have this,” Beshear said. “Number one: do everything you can not to get it yourself, but number two: especially with the most vulnerable, we treat ourselves like we have it and we don’t give it to those that could be harmed.”

Copy Desk Chief Max Chambers can be reached at [email protected] Follow them on Twitter at @chambers_max_e.