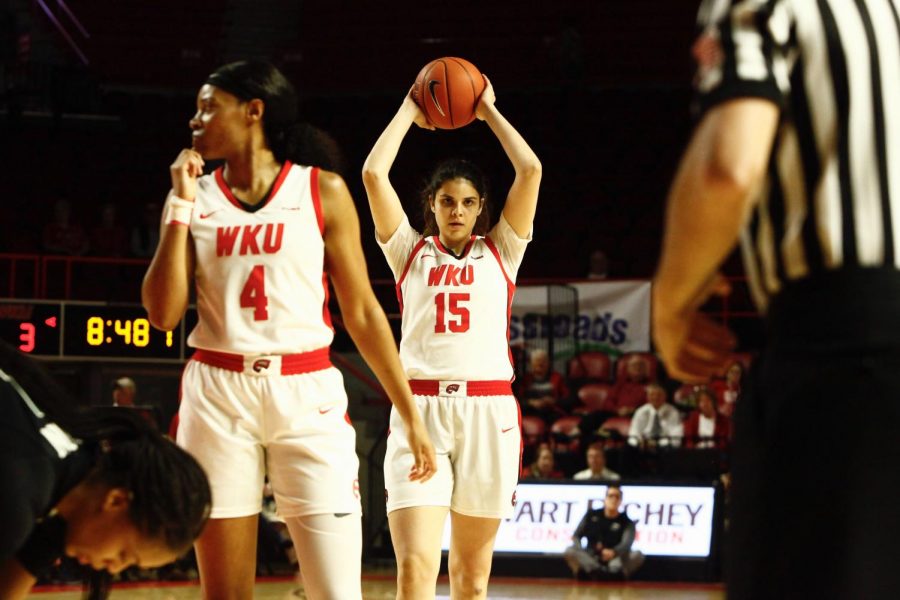 WKU Lady Topper, Raneem Elgedawy holds the ball above her head during the game against the Charlotte 49ers on Thursday, March 5. WKU won 71-60.

Prior to Thursday, the Lady Toppers were one of only 11 Division I teams still perfect at home in 2019-20. WKU has now won 14 straight home games dating back to last season, one of the longest streaks in the nation among DI women’s basketball programs.

Head coach Greg Collins said he was unhappy with some of the officiating throughout the game, but he later forgave the referees after WKU secured a comfortable victory.

“This team has shown initiative, a lot of resiliency, a lot of mental toughness, a lot of bounce-back,” Collins said. “This is just another example of really getting focused, really being tough and really playing together with a goal in mind coming out of halftime.”

“It’s huge,” Collins said about getting an extra day of rest in Frisco, Texas. “This is a good team, but I’m not sure we can play Whitney Creech 37 minutes a game for four games in four days. Maybe for three games in three days. So, getting a first round bye is always huge.”

Elgedawy paced the Lady Toppers with another double-double. Sophomore guard Meral Abdelgawad and redshirt senior guard Alexis Brewer were the only other WKU players to reach double-digit scoring outputs, recording 13 and 12 points, respectively.

“I thought our focus was pretty good,” Creech said. “We locked into defensively, we had a couple of shot clock violations. We kind of let them beat us on the board early on, but we kind of regrouped and boxed out. I thought we did a pretty good job defensively and on the boards.”

The Lady Toppers came into the 24th all-time meeting between the two schools as the league’s highest scoring team, averaging 74.3 points per game, while Charlotte was allowing only 58.7 points per contest, the third-lowest point total in the conference.

Offense won the day on Thursday, as WKU scored 21 points off turnovers and dished out 15 assists on 25 made field goals against the 49ers.

“I think they hold their opponents to like 58 points,” Brewer said. “We really had to score the basketball, but the most important thing was locking down on defense. We knew our offense would come.”

Charlotte shot 42% from the field, 31% from the three-point line and 67% from the charity stripe.

The 49ers outrebounded the Lady Toppers 38-30 and outscored WKU 36-28 inside the painted area, but Charlotte’s low shooting percentages sunk its chances down the stretch.

Junior guard Octavia Jett-Wilson started the game out with a 3-pointer for Charlotte, and Elgedawy drained a triple for the Lady Toppers to tie the game at 3-3 with 9:20 left to play in the first quarter.

Following an offensive rebound, Elgedawy made a second-chance jumper in the paint to give WKU a one-point deficit at 8-7 with 7:42 remaining in the first quarter.

Brewer canned a 3-pointer to extend the WKU lead with 7:05 left to play in the first frame, and Creech joined in on the 3-point parade with one of her own at the 3:50 mark in the quarter.

Abdelgawad continued the Lady Toppers’ emphasis on shots from behind the three-point line, as the Cairo, Egypt, native drained yet another 3-pointer with 3:01 left in the first.

Elgedawy hit a layup to extend the Lady Topper scoring run to 5-0 with 1:33 left in the quarter, helping WKU head into the second quarter with a five-point advantage at 19-14.

Brewer struck first for the Lady Toppers in the quarter, swishing a jump shot to extend the WKU lead to five points at 21-16 with 7:41 left in the second.

The 49ers burst out to a 6-0 scoring run, and Charlotte reclaimed the lead at 22-21 with 6:10 remaining before the halftime break.

Junior guard Sherry Porter, who played with a brace on her right knee, drove and finished in the lane to reduce the WKU deficit to a single point at 23-24 with 5:29 left to play in the first half.

WKU cooled off, going without a basket for 2:37 of clock time. Abdelgawad ended the run after she sank a cutting layup to make the score 25-28 with 2:52 left to play before halftime.

Redshirt freshman guard Myriah Haywood then hit a layup for her first points of the contest, and she cut the Charlotte lead to just one point at 28-27 with 1:03 left to play in the quarter.

Brewer hit the final shot of the half for either team, draining a jumper with nine seconds left to play in the second quarter. WKU headed into halftime with a one-point deficit, 30-29.

The officiating crew called a loose game in the first half, as there was only one made free throw by either team in the first two quarters. Elgedawy swished the only successful attempt from the charity stripe at the 8:16 mark in the opening quarter.

The Lady Toppers got things cooking early. After Creech recorded a steal, Elgedawy finished the layup off a feed by Abdelgawad. Abdelgawad then stole the ball, and redshirt senior forward Dee Givens finished the break after she converted a layup at the 9:08 mark in the third.

Abdelgawad drained a 3-pointer with 7:40 remaining in the third quarter, extending the WKU scoring run to 9-2 and forcing Charlotte head coach Cara Consuegra to ask for a timeout.

Elgedawy grabbed a miss by Brewer, and she finished inside to record the second-chance layup with 6:39 left to play in the third quarter. Elgedawy hit another layup on the following possession.

The Alexandria, Egypt, native converted an old-fashioned three-point play at the 5:16 mark in the third quarter, scoring on three straight possessions for the surging Lady Toppers.

Creech kept the excitement going with an athletic double-clutch layup, pushing the WKU lead to double digits at 47-36 with five minutes remaining in the third quarter.

Elgedawy kept pouring it on the 49ers, draining a 3-pointer off an assist by Creech to extend the WKU lead to 50-36 with 4:33 left to play before the final quarter.

The Creech-Elgedawy duo had combined for the Lady Toppers’ last 14 points at the 4:33 mark, but Charlotte answered by mounting a 7-0 run of its own at the 2:18 mark.

Abdelgawad finally stopped the bleeding, getting a second-chance layup and a 3-pointer on the following possession to make the WKU lead 55-45 with 1:28 left to play in the third frame.

Creech sank a buzzer-beating jump shot as time expired, allowing the Lady Toppers to enter the decisive quarter with a 59-46 advantage over Charlotte.

Despite scoring 30 points in the third frame, only a trio of Lady Toppers contributed, as just Elgedawy, Creech and Abdelgawad were invited to the WKU scoring party.

Collins took his jacket off late in the third quarter after getting exasperated with the game’s officiating crew, and he continued to look displeased as the fourth period opened.

The Lady Toppers didn’t score in the final quarter until the 6:16 mark, which is when Elgedawy drilled a 3-pointer to give WKU a 62-51 lead over the 49ers.

Brewer matched Elgedawy’s triple with a 3-pointer of her own. Her shot from behind the three-point line extended the WKU lead to 67-54 with 4:50 left to play in the game.

The Lady Toppers went 0 for 4 on their last handful of field goals, failing to convert a bucket from the floor in the last 4:50 of clock time.

But Elgedawy netted four free throws down the stretch, helping the Lady Toppers keep the feisty 49ers at arm’s length for the remainder of the contest.

WKU kept its extended home winning streak alive with a nine-point win over Charlotte, clinching a first-round bye in the upcoming C-USA Tournament in the process.

Following the win, the Lady Toppers will remain in Diddle Arena and conclude the 2019-20 regular season against LA Tech (14-14, 6-11 C-USA) on Saturday afternoon.

WKU’s regular season finale will be available on CUSA.tv.