‘If you feel sick, stay home.’ Caboni provides details on how the coronavirus will impact WKU 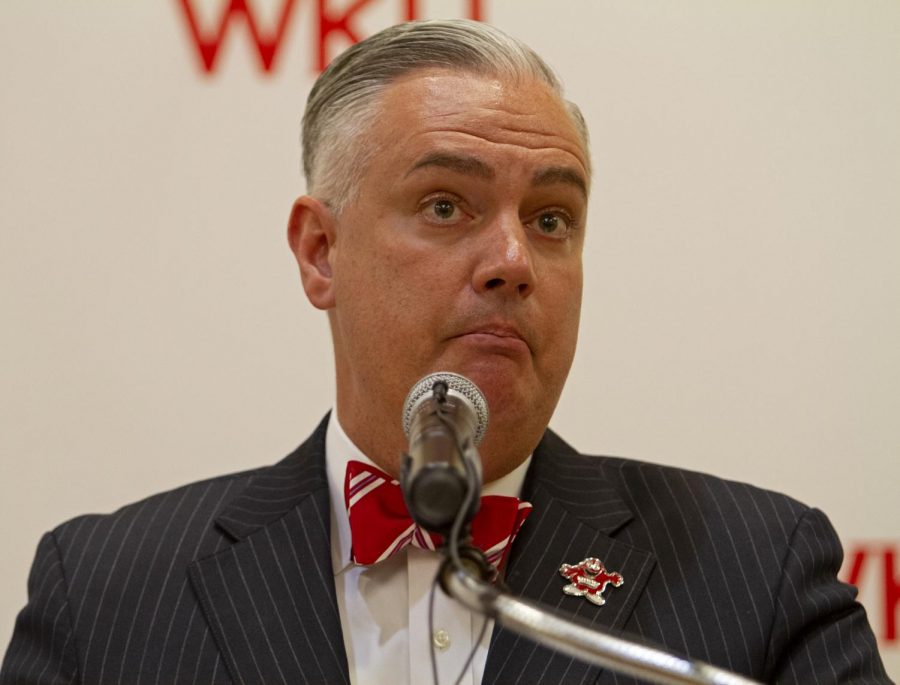 WKU President Timothy Caboni announced a change in university operation due to coronavirus in a March 11 press conference. WKU will extend spring break by one week and then transition to two weeks of online-only classes.

WKU President Timothy Caboni held a press conference shortly after the university announced its decision to extend spring break by a week and to suspend in-person classes until early April.

How will classes be impacted?

Spring break will be extended until Sunday, March 22. In-person classes will transition into “alternative delivery formats” until Sunday, April 5. WKU created a page on its website for how the university will handle the growing concern over the disease.

Caboni said spring break was extended to give faculty members time to transition their classes from in-person to online or other formats. He said for some faculty members, this may be the first time teaching online and will be a “tremendous undertaking.”

“While the spring break is an extension of time for students who can be away to be away from campus or choose to be that for our faculty, that’s the time will be a time intense effort,” Caboni said.

Read more: What is the coronavirus? What you need to know to be prepared at WKUWill my graduation date be impacted?

Caboni said as of Wednesday, graduation dates and ceremonies will not be impacted by the changes to spring break and classes.

“For every student who anticipated graduating from WKU in May, our plan is to ensure you’re able to do that,” Caboni said.

Should I stay on campus?

The page stated students are encouraged to remain at home, but residence halls will open as scheduled on March 15. For any students remaining on-campus, dining options will remain open, with some modifications. Caboni said WKU is trying to limit large dining hall spaces, and will move more into a grab and go set-up.

WKU is still discussing other on-campus service operations such as the Preston Center. Division of Enrollment and Student Experience will provide more details about on-campus services, according to a statement released.

If a student is able to return home and feels it is a safe location, Caboni encouraged them to return home rather than staying at the residence halls. With classes moving to an online format, he did say students without access to the internet should stay at WKU.

How are travel and study abroad impacted?

Beginning March 16, all university-funded international or domestic travel will be suspended, unless it is “mission-critical.”

Caboni said the university is having conversations with students who are studying abroad about the possibility of returning to the U.S., but Caboni said a portion of that decision is up to the student and the trip organizer.

Read more about past WKU travel and study abroad decisions.

Bob Skipper, director of Media Relations, said Semester at Sea, a popular study abroad program where students travel to different countries on a cruise ship, has been cut short. He said the students are set to dock in South Africa but will be returning back to the U.S. soon.

Caboni said with all study abroad programs ending prematurely, they are working to determine if students will get any financial compensation or refund.

Where is the coronavirus?

Caboni said there is no reports of the coronavirus at WKU or in the area, and WKU is not aware of anyone with exposure to the virus returning to campus.

“So the question is, well, why are we so concerned?” Caboni said in the conference. “Because there’s a greater good that we all have to sacrifice for, and that’s to make sure that we don’t take over capacity of our medical facilities because we thought it would be easier just to bring everyone together on the same roof.”

On March 6, Gov. Andy Beshear announced the first confirmed case of coronavirus in Kentucky. As of March 10, there were eight reported cases of the virus in the state, according to the Courier-Journal.