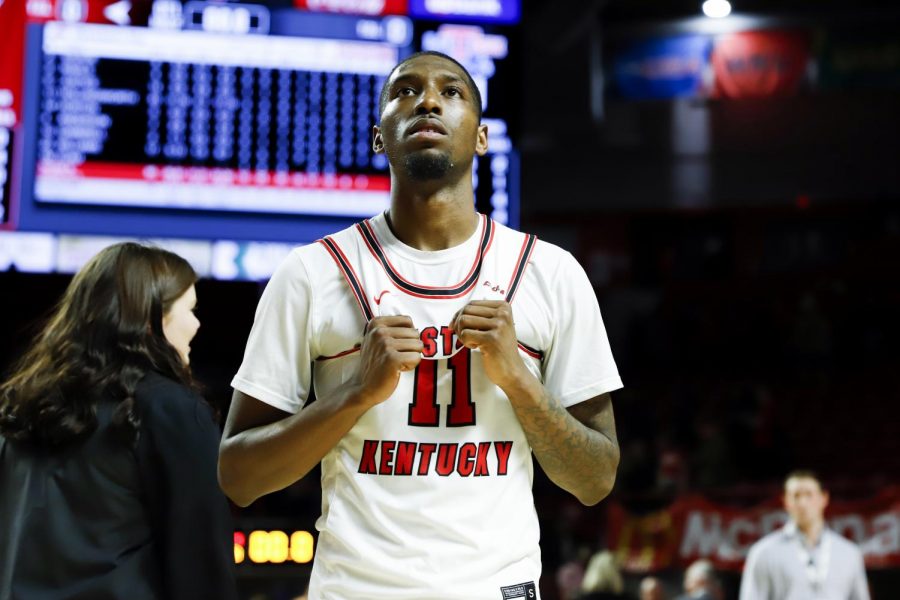 WKU junior guard Taveion Hollingsworth (11) looks on after the basketball game against Louisiana Tech on senior night at E.A. Diddle Arena on February 27, 2019.

Prior to the weekend, WKU was tied with LA Tech for second place, with both squads just one game back of first-place North Texas in the league standings.

The Hilltoppers defeated the Bulldogs 95-91 in overtime on Feb. 27, setting up a scenario where WKU could’ve moved into a tie for first with a win over the Mean Green on Sunday.

North Texas defeated WKU 78-72 in overtime, claiming the C-USA regular-season title and the No. 1 seed in the upcoming C-USA Tournament in the process.

Head coach Rick Stansbury has stressed that his team still controls its own destiny, and that remains true ahead of the final C-USA regular season game left on its schedule.

With a win in their final road matchup at Florida International (18-11, 9-7 C-USA), the Hilltoppers would lock up the No. 2 seed in the C-USA Tournament. Even with a loss to the Panthers, WKU could still secure the No. 2 seed depending on how LA Tech fares in its last two outings.

One game remains for the Hilltoppers, and WKU will have plenty of positives and negatives to take away from a weekend that saw the program post a 1-1 record in two overtime classics.

“It doesn’t change what we’re trying to do,” redshirt junior forward Carson Williams said. “We’re coming out and we’re going to fight regardless of whether we’re fighting for first place or last place. That’s the kind of players we’ve got in this locker room. Don’t expect anything different.”

Junior guard Taveion Hollingsworth recorded one of the top individual efforts in C-USA history against LA Tech, but he also came up short at the line when WKU needed him most against North Texas.

The Lexington native netted 17-of-19 free throws on Feb. 27, leading to a career-high of 43 points, which were the most points scored by a WKU player since Jim McDaniels scored 49 points at Tennessee Tech on Jan. 4, 1971.

Hollingsworth also led the Hilltoppers in scoring on Sunday against the Mean Green, but the 6-foot-2-inch guard struggled from the free-throw line, making just 5-of-9 shots.

Two of his misses at the charity stripe came in the final five seconds of regulation, as both shots he received after a shooting foul failed to snap a 63-63 tie prior to an overtime period.

Hollingsworth — who was named C-USA Co-Player of the Week for the second time this season on Monday afternoon — was far from the only WKU player to struggle at the line in Denton, Texas. As a team, the Hilltoppers shot just 10-of-18 from the charity stripe against Mean Green.

“Winning and losing is a fine line,” Stansbury said. “Make one free throw, you might win the game. That gets magnified toward the end. There’s a lot of other plays throughout the game.”

The Hilltoppers have played in many close games throughout their 2020 C-USA slate, as 14 of their 17 conference games have been decided by 10 points or less.

WKU has played into an overtime period in three of its last four games, with each of its last six outings having been decided by six points or less.

“Our margin for error is zero,” Stansbury said on Feb. 22. “It’s not like we can show up against bad teams and have easy nights … There’s really no bad team in this conference this year that you can just show up and beat somebody. Not us, we don’t have that kind of fire power.”

In the past two postseasons, WKU’s attempts at making an NCAA Tournament appearance for the first time since 2012 have been derailed by its play during the final few possessions of both the 2018 and 2019 C-USA Tournament championship games.

Marshall defeated the Hilltoppers 67-66 in 2018 and Old Dominion outlasted WKU 62-56 in 2019, preventing Stansbury’s squad from grabbing the league’s automatic-qualifier spot.

But before the C-USA Tournament picture comes into focus, the Hilltoppers will hit the road one last time, travelling to Miami for the second time in five weeks. WKU and FIU previously met on Feb. 1, and FIU defeated the Hilltoppers 81-76 in the Ocean Bank Convocation Center.

The Hilltoppers’ second matchup with the Panthers is slated for a 6 p.m. tipoff on March 7. The regular season finale will be streamed live on CBS Sports Network on Facebook.