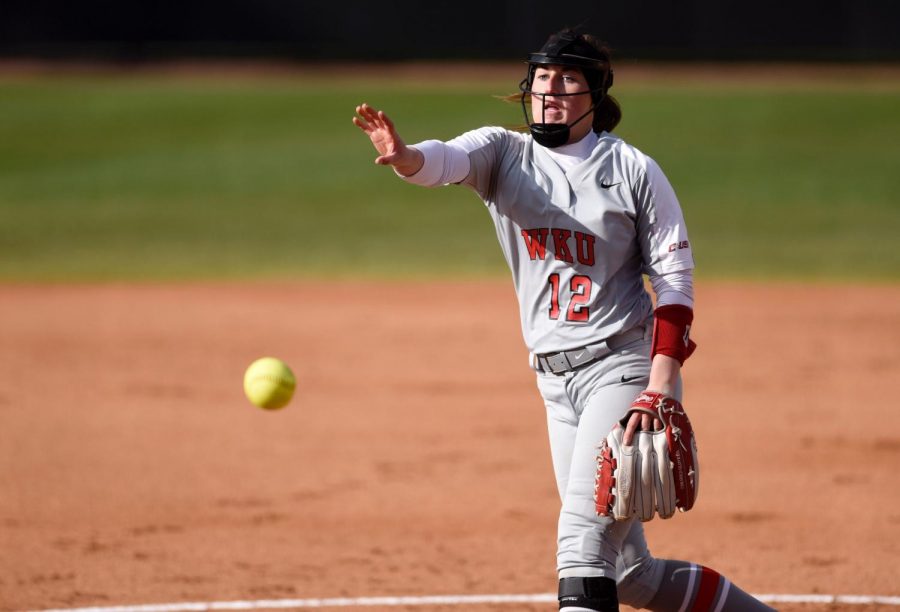 Senior Kelsey Aikey and sophomore Kennedy Sullivan have been named Conference USA Pitcher of the Week and Player of the Week, respectively, after leading the WKU softball team to a 4-0 week that included a sweep against Middle Tennessee State, the league office announced on Monday.

The duo also helped the Hilltoppers reach the 20-win milestone in just 24 games this season — the quickest the feat has been achieved in program history, topping last season’s record of 25.

Aikey, who was also named the C-USA Co-Pitcher of the Week on Feb. 24, shut down the Blue Raiders from the circle. The Cedar Falls, Iowa, native earned two wins and a save against MTSU while allowing just two earned runs in 14.1 innings of work across three games played.

The senior struck out 15 batters across three appearances while registering a 0.98 ERA and limiting MTSU to a .180 hitting percentage. In the series opener, Aikey logged a complete-game two-hitter.

Two days later, Aikey inherited the game-tying and go-ahead runs in the bottom of the sixth before navigating out of the jam with just four pitches en route to a save.

“I am proud of Aikey’s performance in the circle this weekend,” head coach Amy Tudor said in a release. “She was poised, focused and a leader all weekend. Her ability to keep the hitters off balance and to bring confidence to the circle was pivotal in all three victories.”

With the wins, Aikey is now 10-2 on the season in addition to adding her third save of the year. She owns 15 career saves, ranking her first in the WKU record book and second in the C-USA listings. With 115 strikeouts on the season to date, Aikey ranks 15th in all of NCAA softball.

Aikey now owns six career Pitcher of the Week awards across her career on the Hill after earning two as both a sophomore, junior and senior. Less than a month ago, Aikey was also named one of 30 candidates for the 2020 Senior CLASS Award for NCAA softball.

Sullivan turned in another well-rounded week for the Hilltoppers. The pitcher/outfielder drew a midweek start in the circle, and she struck out nine and earned a complete-game win over Belmont on March 4.

The Georgetown native also recorded a two-hit performance in the win over the Bruins and then turned in a 3 for 3 day in WKU’s series finale victory over MTSU. Across the week, Sullivan hit a scorching .583 with seven knocks in 12 plate appearances.

“I’m proud of the way Sullivan continues to perform at the plate, in the circle and in the outfield,” Tudor said in a release. “She had a fantastic week for us and continues to impact our team with all aspects of her game.”

Sullivan held down right field when she wasn’t in the circle for the Hilltoppers. She drove in three runs across the 4-0 week, including one on a perfectly delivered sacrifice bunt against the Blue Raiders.

The sophomore now owns a trio of three-hit games this season to go along with eight more two-hit outings. She currently owns an eight-game hitting streak and nine-game reached-base stretch.

Across the season, Sullivan has racked up 35 hits, which lead C-USA and rank 14th across the nation.