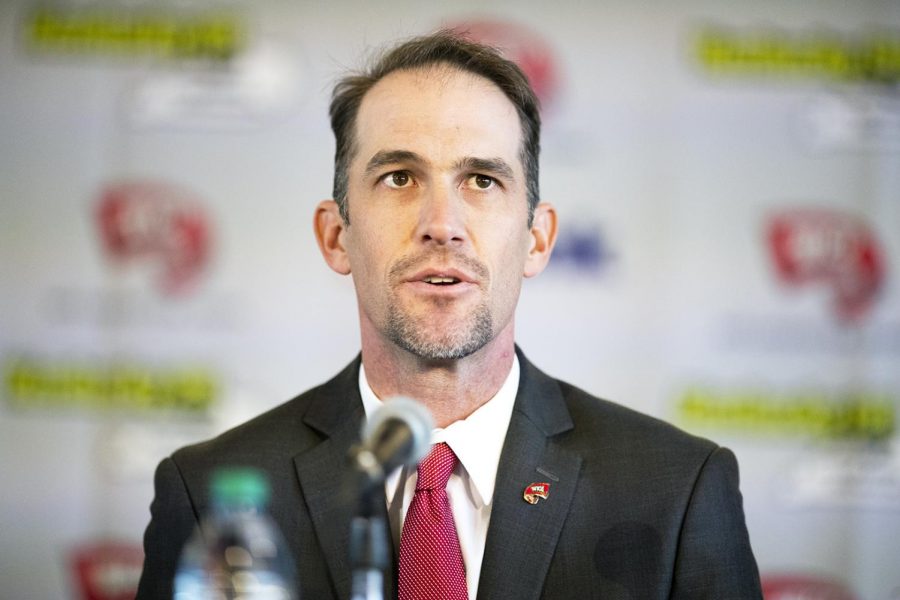 The COVID-19 pandemic has not only severely impacted spring athletic teams at WKU, as the coronavirus has also put a major strain on the university’s fall sports as well.

With Conference USA announcing the cancellation of all spring sport competition and championships on March 16, the WKU football program was subsequently forced to cancel its spring football practices and the annual Red vs. White spring game on March 19.

Every collegiate football program has been tasked with adjusting to a temporary new normal very quickly, and Hilltopper football has been no exception to that rule, as the team has been continuing to grow and bond as a program despite the cancellation of spring football.

Speaking to local media representatives in an online teleconference on Monday, second-year head coach Tyson Helton discussed how his coaching staff is continuing to prepare players for the upcoming season in the absence of the team’s normal spring practice routine.

“We’ve been using the Zoom app for meetings,” Helton said. “We usually follow that with testing our guys through Google. One day we have a meeting, the next day they have a test.”

The new format of training is unorthodox, but Helton said his coaches are taking advantage of the technology at their disposal to continue to grow their players as much as they can.

“The technology part has been great, just because you can show your computer screen and go through the installs with the guys,” Helton said.

Spring practice is a key period for position battles and the formation of the team’s starting lineup when fall rolls around, and even with the option to communicate with players online, the inability to observe and coach usual practices could have a negative impact on the team’s growth.

Helton said he hopes to use a small window of on-field practices before the season begins to help soothe the absence of the in-person training sessions the team is currently missing.

“All of the studying and all of the mental parts are great, but you’ve got to produce on the field,” Helton said. “We’ll have a short window when the NCAA says we can get back, but that window is going to be very brief.”

Though the Hilltopper football team is missing some key aspects of the preparation process, Helton believes WKU is still in a good position due to the age and experience of the team.

“Having an older team, you know, most of the spots are kind of dictated,” Helton said. “For us, it was really the backup spots with young talented players, and how much they’re going to play this year, that I would’ve liked to have in spring football, but we’ll have time in fall camp to figure all of that out.”

A pair of rising seniors for the Hilltoppers, defensive back Trae Meadows and offensive lineman Tyler Witt, also spoke to the media online Monday, discussing how they’ve continued to improve in the absence of traditional practices and how they’re adjusting to the new online format as both students and athletes.

“There’s going to be people who aren’t going to put in the work that we are, so this is our time to get that edge,” Witt said. “We may not be in spring ball, but this is the new path that we have to take to take those next steps for the season.”

WIth gyms and weight rooms closed across the country, WKU football players have been adopting unorthodox training methods to keep themselves in shape for when the pads come back on.

Guidance from the Hilltoppers’ strength and conditioning coach, Jason Veltkamp, has helped the players in their pursuits of exercises that can be completed without traditional equipment.

“[Veltkamp] is most definitely creative,” Meadows said. “The workout I did this morning included pushups using household objects. He’s said to use milk jugs as weights.”

Witt said a pair of WKU offensive linemen have adopted a farm as their gym in recent weeks.

“Woodford Langford and Seth Joest went out to Woodford’s farm and collected a bunch of weights he had there and set up a barn gym,” Witt said. “They’re pulling tires and stuff. Real country boy stuff.”

Not only have the players had to adapt to a new form of training for the coming season, they’ve had to acclimate to classes moving online, an adjustment that both Meadows and Witt said has been tough.

“Personally, I’m not really a big fan of online, I’ve probably had one or two classes online, but I’m more of a face-to-face person,” Meadows said. “It’s not necessarily hard, but it is like a little grind for me.”

Witt agreed with Meadows, adding that his coursework is more difficult to complete online.

“I’m a mechanical engineering major, so my classes are a little harder,” Witt said. “To not have that face-to-face experience with some of them is a little tough.”

As the dates of the sporting events being cancelled or postponed around the country continue to inch closer and closer to the beginning of college football season, there is growing uncertainty surrounding when — or if — the next season of college football will be played.

Despite those potential worries, Helton said he’s hopeful that WKU fans will still see the Hilltopper football program take the field again at some point in 2020.

“In our country, football is a great game, and a lot is done around football,” Helton said. “I think there’s a lot of people in a lot of high places sitting around some meetings right now [saying], ‘Boys, if we don’t get football season going, it’s not going to be a good deal.’ I think there’s a lot of meetings centered around the football season. Football is a very important sport to this country. I’m hoping by June they can say, ‘You guys can do this or that,’ and we’ll have a better feel moving forward.”