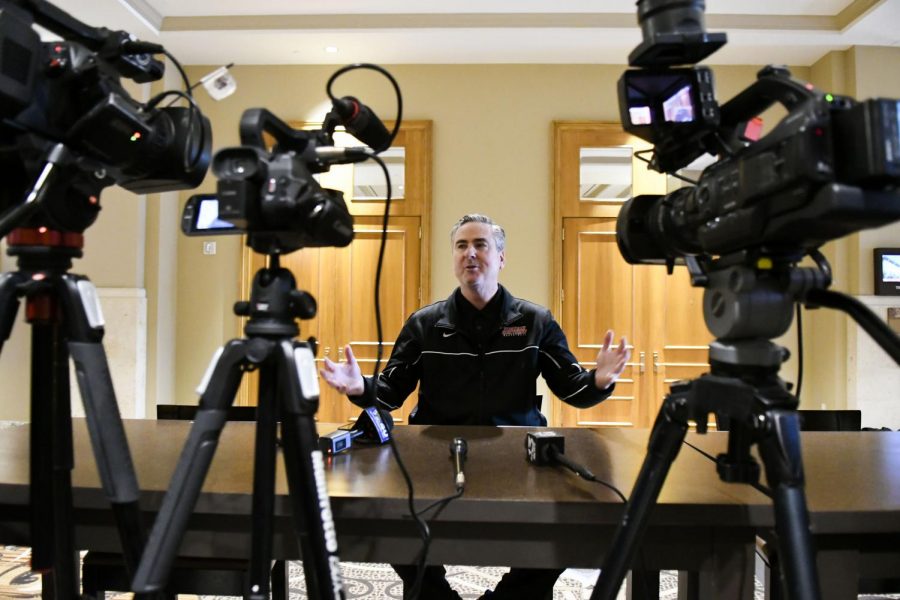 WKU men’s basketball head coach Rick Stansbury and WKU women’s basketball head coach Greg Collins both traveled with their respective programs to the Conference USA Tournament in the Ford Center at The Star in Frisco, Texas, on Tuesday in search of automatic bids to their respective NCAA Tournaments, but those hopes were dashed by the coronavirus outbreak on Thursday.

C-USA canceled the remainder of its conference tournament due to continued concerns about the coronavirus outbreak on Thursday, and the league also suspended all spring sport competition for league institutions until further notice just 58 minutes later.

A few hours after C-USA made its announcements on Thursday, the NCAA announced it would cancel its men’s and women’s basketball tournaments in addition to calling off all of its remaining spring and winter championship events.

The eight senior student-athletes listed on the Hilltopper and Lady Topper basketball rosters have likely played their last games in a WKU uniform, a notion that’s caused coaches, players and administrators to grieve the sudden end of their 2019-20 campaigns, but also acknowledge their successes and the gravity of the current situation as it relates to COVID-19.

WKU athletic director Todd Stewart, who also addressed the media on Thursday, said he felt disappointed for all of the student-athletes who won’t have the chance to compete in the postseason, but he was “especially disappointed” for the university’s seniors.

“They didn’t really ever have a final game so to speak, at least not one they knew would be their final game,” Stewart said. “I saw the Vince Carter press conference last night, and maybe that’s his final game and he didn’t know that when he took the court.”

“It’s a little surreal — It’s not a little, it’s a lot.” Stewart continued. “There’s just unusual things that are happening and everybody is trying to deal with that the best they can.”

‘When you get knocked down, you get back up’

The WKU men’s basketball program finished its last game of the regular season against Florida International on March 7, defeating the Panthers 91-85. After that result, Stansbury said he thought his team had the right pieces to make a deep run in the C-USA Tournament.

“There’s a lot of things in life that’s not fair,” Stansbury said. “A lot of things in life, right or wrong. This was a situation that none of us liked. But I think when you step away and look around you, what’s happening across the world a little bit, we can understand it.”

“This is something that’s much bigger than athletics right now even though most of the time we all get wrapped up in it like it’s the only thing in life that matters,” Stansbury continued. “This is one of the moments where other things in life are bigger than athletics.”

Stansbury said his team has experienced its fair share of “teaching moments and life lessons” throughout the 2019-20 season, and he summarized his team’s enduring mentality in one simple life lesson: “When you get knocked down, you get back up.”

“You don’t think this group of guys came down with something in mind?” Stansbury asked. “I couldn’t have felt better about the mission that they were coming on. We’ve seen it over, over and over with this bunch. No one gave us a chance, our players a chance, to be where they’re at. They deserve all of the credit for finding ways and learning life lessons.”

In a season where the Hilltoppers faced seemingly endless amounts of adversity — losing sophomore center Charles Bassey to a season-ending injury and senior guard Kenny Cooper for the entirety of the season due to NCAA transfer policies — the Hilltoppers finished the year with a 20-10 overall record and a second-place finish in the C-USA standings.

WKU had to rely on freshman guard Jordan Rawls to orchestrate the offense after graduate guard Camron Justice got injured early in the year, ultimately causing the Hilltoppers to play with a seven-man lineup for the majority of C-USA play, one that forced redshirt senior wing Jared Savage and redshirt junior forward Carson Williams to hold down the frontcourt as undersized bigs.

Eight teams were left on the men’s side of the C-USA Tournament, and Stansbury said he believed his team had as good of a chance to win as any of the remaining squads.

“I don’t have to tell you guys, this was a special team,” Stansbury said. “Y’all know that, y’all witnessed that over and over and over. Nothing is ever promised or guaranteed in three games. Did our team have a chance? I think everybody knows that.”

Savage, Justice, senior forward Matt Horton and senior guard Evan Stack, a former student manager for the program, didn’t have a chance to soak up their final games in a WKU uniform, and Stansbury was adamant that his seniors, and others around the country, should receive a “blanket waiver” for more collegiate eligibility if they want to have that opportunity.

“I think that’s the way you could find some silver lining in this dark day right now, for these seniors, especially,” Stansbury said. “That would give them some hope, some light a little bit, a little bit more of understanding, a little more compassion for what’s going on.”

“That’s something I believe strongly in and something I’m going to voice,” Stansbury continued. “I think there will be a lot of coaches across the country that will voice the same thing.”

‘We are sad, but we can’t be selfish about what we want in this moment’

The Lady Toppers played their last game of the regular season against Louisiana Tech on March 7, and WKU defeated the Lady Techsters 71-67. Collins said he believed the C-USA Tournament field was as “wide open as it has ever been” this season, which really stings for a group that had “put their heart and soul into everything.”

While their tenures on the Hill are over, Collins said he didn’t want the Lady Toppers to lose sight of what they’d accomplished during this season and throughout their careers, and he reminded them of those accomplishments after the news broke on Thursday.

“I didn’t want Whitney, Dee, Alexis and Sandra Skinner to feel like everything was in this moment.” Collins said. “I didn’t want them to forget about all the success, all the growth, all the things they have accomplished over their four or five years here or three or however many years they have been playing here.”

“I told them this moment stinks,” Collins continued. “We are really sad, but we can’t lose sight of the fact that six weeks from now, six months from now, you are going to be very proud of what you accomplished and what you got done at this university.”

Collins said he reminded his team that at the end of the day, basketball is just a game and there is a bigger picture that involves the health of many people who could potentially be harmed by the coronavirus, including the student-athletes themselves.

“We are sad, but we can’t be selfish about what we want in this moment if there is a bigger picture that we have to be more concerned about,” Collins said. “I wouldn’t want anybody to get out there on the floor and end up really sick and in the hospital over a basketball game.”

Collins agreed with Stansbury’s assertion that all NCAA seniors should receive a blanket waiver that would give them the option to return to college for another season, especially because he knows his “young ladies would love to get out there” and play more games.

“That is beyond my pay grade, but I can tell you one thing, I think there are a lot of fans and I know one coach that would love to have Whitney Creech, Dee Givens, Alexis Brewer and Sandra Skinner back for another year,” Collins said. “So, if that happens, we’d be all for it.”

The Lady Toppers had a shot at making the NCAA Tournament field even if they didn’t claim an automatic bid. WKU was in contention for a highly coveted at-large bid, as the Lady Toppers finished the regular season at 22-7 and were ranked No. 31 in the latest RPI rankings.

Collins said the Lady Toppers put themselves in the best position possible, and now they’ll try to pick themselves up after the harsh reality of COVID-19 knocked them down.

“Needless to say, they’re crushed — seniors in particular are just crushed,” Collins said. “They wanted an opportunity to compete for a championship. Felt like we had a team that had a chance to do that. They were proud of what we accomplished this year, but you kind of hang your hat on what you do at the end of the season and they were looking forward to that.”