And the Category Is.. The 7 Most Dazzling ‘Pose’ Ballroom Battles (VIDEO) 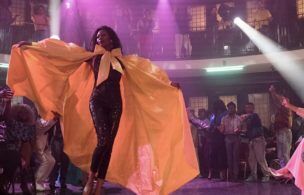 And the Category Is.. The 7 Most Dazzling ‘Pose’ Ballroom Battles (VIDEO)

Ryan Murphy’s groundbreaking LGBTQ series Pose is coming to an end with its third and final season premiering May 2.

The FX drama has scooped a ton of awards for its depiction of the drag ball culture scene in New York City during the HIV/AIDS epidemic of the 1980s and ’90s. See Also8 Reasons We Can’t Wait for ‘Pose’ to Return for Season 3
FX’s recent ‘Pose-A-Thon’ has us longing even more for new episodes.

But Billy Porter is the real showstopper with his captivating performances as ball emcee Pray Tell that have landed him a Golden Globe and Emmy.

Now, before the show and its legendary house mothers bow out, take a look back at some of Pose’s most dazzling ballroom battles:

The ball that started it all. Pose’s opening scene firmly planted viewers in its effervescent world as the iconic House of Abundance robs a royal art installation only to later perform in the decadent costumes like royalty themselves. Obviously, the crew steals the show, but their celebration is cut short when the cops arrive to bust them for their crimes. Like true queens, however, they willingly hand themselves over, reveling in the impact of their jaw-dropping performance. In the words of Pray Tell, “now THAT is how you do a ball!”

House of Abundance Vs House of Evangelista

Another highlight from the series pilot, this vogue battle sees Blanca (Mj Rodriguez) emerge as the mother of the House of Evangelista, challenging her former home, House of Abundance. The tension between Blanca and her former mother Elektra (Dominique Jackson) is palpable, rendering this battle one to remember as the houses leave it all on the dance floor. Damon (Ryan Jamaal Swain) makes his first ballroom appearance after Blanca graciously takes him under her wing. While House Evangelista loses the battle, this scene is a marvelous introduction to the tensions of the ballroom scene.

The Mother of All Balls

When two mothers battle face to face, expect a serve like no other. And that’s just what Elektra and Blanca brought to the table in this iconic runway challenge. As the reigning champion, Elektra was clearly on top of her game until Blanca dramatically emerges in a captivating pink dress to prove her worth. And prove she does. Blanca wins the challenge and also establishes herself as a force to be reckoned with against Elektra’s bitterness.

In this battle, Damon and Ricky (Dylión Burnside) vogue face-to-face, after the recent end of their relationship. What a way to raise the stakes! Despite their tensions, the two each give a performance that leaves the audience begging for more. However, due to Elektra’s scheme to injure Damon before his audition for Madonna’s world tour, Damon emerges as the victor. If there’s one thing to take away from this battle, it is like Pray Tell says: “Children always pay for the sins of their mother.”

From the Ballroom to the Streets

While most of Pose centers on the voguing done in ballroom battles, this scene provides insight into the other avenues of the New York City vogue culture. As Damon begins to immerse himself into the ballroom world, Blanca and Pray Tell show him that this community is ever-growing. Always a ball emcee at heart though, Pray steps in to moderate the dances up to his standards.

Finally on the other side of the mic, Pray Tell makes his drag ball debut to the soundtrack of Whitney Houston’s I’m Every Woman wearing a stunning wig and glittering dress. Despite his initial timidness, Pray lets loose and channels his inner diva, giving the judges a glorious spin to seal the deal. Coming at the end of a season where his AIDS diagnosis begins to control his life, this joyful sequence was a wonderful moment for his character to reclaim his autonomy.

Despite the tragic and sudden death of fan-favorite character Candy (Angelica Ross), she certainly gets her due in this stunning and touching lip-sync to Never Knew Love Like This Before by Stephanie Mills. While certainly an iconic performance, it’s difficult to watch this without tearing up. Watching Candy say goodbye to the people who dearly love her is bittersweet, but all the more impactful due to her monumental presence on the dance floor.