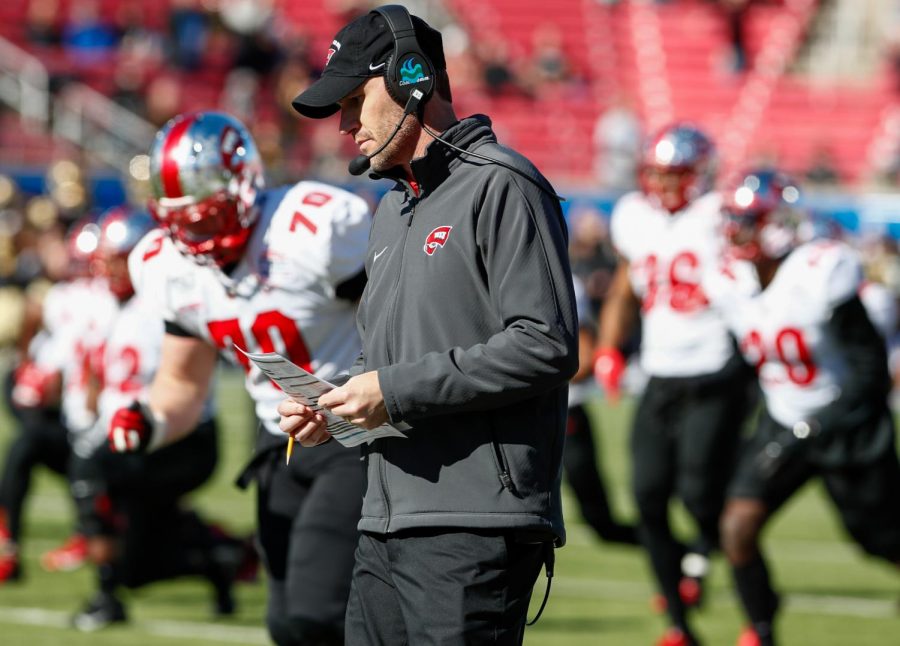 WKU Head Coach Tyson Helton and the Hilltoppers retake the field after the first half. The game was tied 10-10 at the half.

Tyson Helton discussed his quarterback room during the WKU football program’s National Signing Day press conference on Wednesday, and the head coach expressed confidence in the quarterback position despite signing two freshmen at that spot during this recruiting cycle.

Three-star Grady Robison from Eastlake High School in Sammamish, Washington, was signed during the early signing period in December, and two-star Darius Ocean from Hough High School in Cornelius, North Carolina, was a new signing announced by the program on Jan. 10.

“We got some older guys at quarterback,” Helton said. “You know, the transition there, losing Ty [Storey] we really felt like we needed to sign two. Felt like both of our freshmen are good fits for us.”

Helton is set to return rising redshirt senior Steven Duncan, who started early on in the 2019 campaign and struggled before sustaining a season-ending injury against Louisville in the third week of the season, in addition to rising redshirt junior Davis Shanley, who started several games in 2018 under former head coach Mike Sanford but didn’t see much action in 2019.

Rising redshirt sophomore Kevaris Thomas is also slated to return. Thomas, a former four-star recruit in his own right, hasn’t played much as a Hilltopper, seeing the field for three games in 2018 and only one in 2019, a season in which he didn’t attempt a single pass.

Helton also expressed interest in finding a quarterback in the transfer portal, preferably a graduate transfer like Storey, who transferred from Arkansas and played his final season for the Hilltoppers.

“I think our guys who have been here, any one of them could start for us,” Helton said. “But we’re always going to add competition, and what better way to do it than to find a good quality transfer quarterback? You know, particularly a guy who may have been in the fire, you know, played at a high level, needed a new start.”

Helton also spoke about the loss of defensive ends coach Jimmy Lindsey, who left WKU for Illinois on Jan. 17. Lindsey, who was also listed as the program’s recruiting coordinator in 2019, was replaced by Kenny Baker of Tennessee-Chattanooga.

“Was really excited for him,” Helton said about Lindsey. “Lovie Smith is a great coach and a great man and I think it’s a great opportunity for him.”

Helton discussed the hiring of Baker, who spent just one season as the defensive line coach at UTC after working five years in the same position at Mercer from 2014 to 2018.

Baker will take over a defensive end group that includes two of the best players at the position in all of Conference USA — 2019 C-USA Defensive Player of the Year DeAngelo Malone and former Football Writers Association of America Freshman All-American Juwuan Jones.

“Those are two older mature guys that know what to do and how to do it,” Helton said. “So, you know, you got to have a guy who can walk in the room as a coach that they feel comfortable with, that they feel like can take them to the next level.”

Helton also spoke about the linebacker position, most notably the program adding former University of Tennessee linebacker Will Ignont from the transfer portal on Jan. 30.

“Will is a guy who’s played a lot of football,” Helton said “You know, he’s an older, mature guy. You know, I’ve kind of got to be around him and got to know what he’s about, all those things. So, felt like he was just a good fit here.”

WKU currently has a 22-man Class of 2020 that includes 14 coming from high school, seven from junior colleges and one transfer from another Division I institution.

According to the 247 Sports star ranking system, WKU’s current signing class features 17 three-star recruits and four two-star recruits. Ignont was a four-star player in the Class of 2017.

247 Sports has the Hilltoppers’ recruiting class ranked at No. 79 in the nation and No. 5 in C-USA for now, while Rivals has listed WKU at No. 75 in the country at the moment.

A full list of the six players added to WKU’s 2020 class since the early signing period is available below: