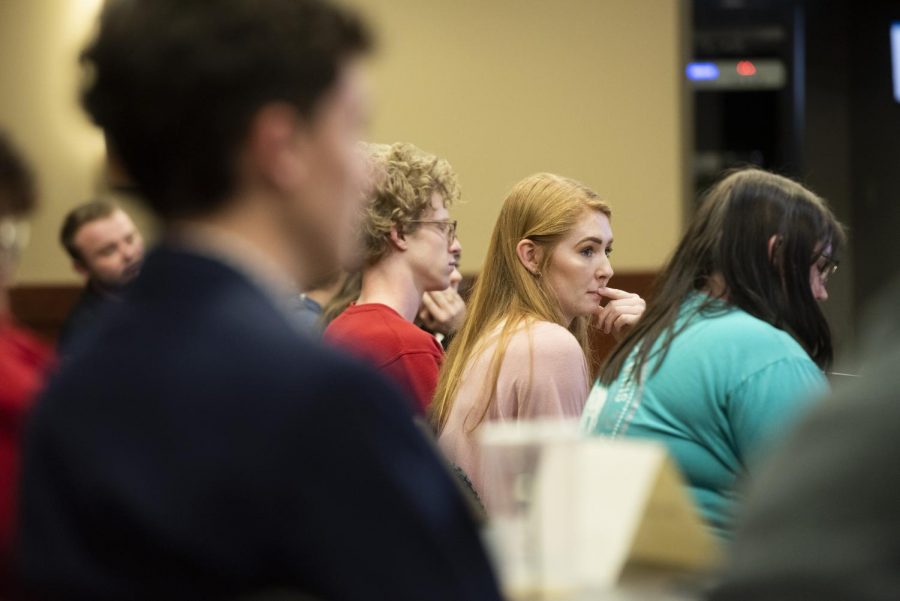 Five new senators have joined the ranks of the WKU SGA alongside the appointment of two new committee chairs. Approval did not come easy, however, as members of the senate leaned hard into nominees’ positions on pressing campus and SGA issues.

The primary focus in approving a nomination is examining a nominee’s qualification. This qualification factor played a major role in the backing nominees received from certain senators. One of SGA’s hot-button topics, the special projects fund, also impacted the vetting for incoming senators.

Among the senator nominees were students Elias Thompson, Me’Lon Criaghead, Destinee Daugherty, Krystin Hardin and Parker Raybourne. All senator nominees, with the exception of Raybourne, were voted in unanimously. The senators nominated to SAVES and Sustainability were Kat Howard and Jamison Moorehead respectively, with Moorehead being appointed unanimously.

Friction in the nomination of Raybourne and Howard came about mostly due to their apparent lack of action during time served with SGA.

Raybourne, a sophomore, previously served the senate as a member of the Academic and Student Affairs committee, but wrote no legislation up to his exit from SGA. He took leave from SGA last semester in order to study abroad at Harlaxton College in England. Raybourne admitted to not having read the 2019-2020 budget prior to Tuesday’s meeting.

Sen. Bradon Burks, when Raybourne’s qualifications as a legislation writer were brought into question, claimed that being a senator was about more than just writing legislation.

“Senators were chosen to help lead students,” Burks said, “And I think there’s numerous ways to do that rather than just writing legislation.”

Heated discussion similarly arose concerning Raybourne’s political affiliation, but was almost immediately halted. Sen. Anthony Survance noted Raybourne followed WKU College Republicans on Twitter and questioned his involvement with the group. Raybourne confirmed that he was a member. Survance alleged this to be contradictory to Raybourne’s ideals.

“You talked about wanting to expand people’s access to education but the Republican Party nationally opposes things like free school,” Survance said.

Survance was cut off by Speaker Nathan Terrell on the grounds that his comment was “inappropriate.”

“At the end of the day, we’re a student organization and we’re non-partisan,” Terrell said.

Senators in the chamber echoed this sentiment, claiming political affiliation had little to do with the mission of representing all students. They, too, were urged to stop making comments on partisanship.

Raybourne spent much of his introductory speech speaking on creation of opportunity for students and a desire to help them realize that their dreams are not intangible. Himself as an example, he spoke on wanting to remove the stigma that WKU’s Study Abroad program was exclusive to Honors College students and the people who could afford it.

“There are tons of resources on campus for you to improve your education and improve your prospects for the future,” Raybourne said.

Howard is a Freshman who serves as a Top Guide and is currently Community Philanthropy Officer for Kappa Delta. She had SAVES as her first choice for committee service, but was sent elsewhere to “even out” committees, according to Terrell. She said she had not written any legislation last semester and wasn’t currently working on legislation when asked.

“I would like to write legislation on something related to the SAVES mission,” Howard said.

As Howard came under scrutiny for her lack of legislation and absence of ideas, Campus Improvements Chair Matt Barr implored senators to remember that chairs are not all-knowing fonts of legislation. He said expecting someone like Howard or Raybourne to come into the position with tons of their own ideas defeats the purpose of the committee as committees are formed with the intent to formulate ideas.

“We’re supposed to develop [ideas] together, as a committee,” Barr said. “That’s what we’re here to do: work together.”

Howard, like Raybourne, claimed she had not read the budget despite being in SGA last semester. Howard was the only person to apply for the position of SAVES chair, according to President Will Harris.