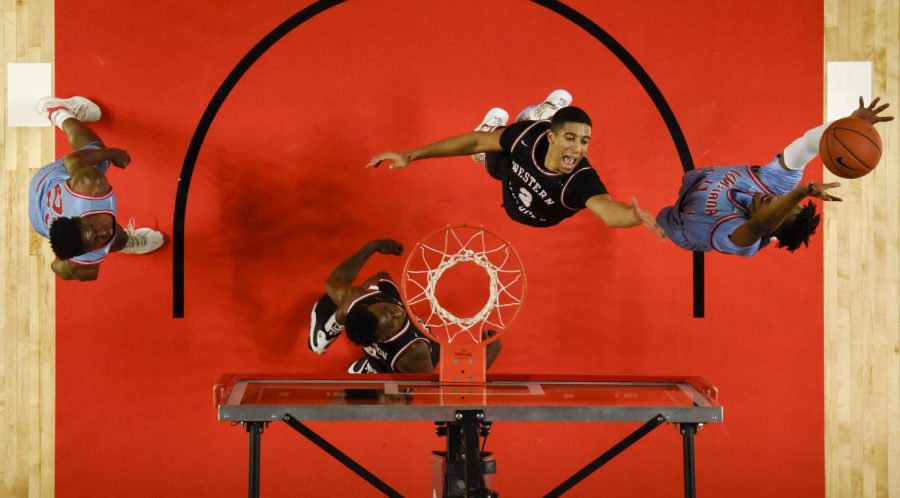 WKU guard Jared Savage (2) leaps to intercept a pass during the basketball game between La. Tech and WKU on February 6, 2020 in Diddle Arena. WKU won 65-54.

WKU locked up the No. 2 seed for C-USA Bonus Play with a 67-62 win at Texas-El Paso on Thursday evening, and the Hilltoppers added another win to their four game-winning streak against UTSA.

The Hilltoppers are now an even 5-5 in games played on the road this season, and head coach Rick Stansbury moved to 3-3 in his career against UTSA with another win.

“It wasn’t easy,” Stansbury said. “San Antonio is a really good team. You know, Wallace and Jackson stepped up and made big plays in the second half, but I think the key was we didn’t let those other guys beat us today, and that was really important to us. We didn’t shoot it very well, but we haven’t shot it well in many games. We found enough ways to score points to find ways to win.”

After shooting 45% from the the floor in the opening half of action, the Hilltoppers struggled in the second half, only making 28% of their shots from the field. WKU had four players reach double figures, including redshirt junior guard Josh Anderson’s 10 points off the bench.

Anderson helped the Hilltoppers outscore the Roadrunners 10-2 in bench points, but it was redshirt senior wing Jared Savage who led WKU on Saturday. The Bowling Green native had a season-high 24 points along with a career-high 16 rebounds across 45 minutes of action.

Savage picked up his fourth double-double of the season. The upperclassmen said when he’s rebounding the ball well, he’s able to get into more of an offensive groove.

“Coming into college, I was a three,” Savage said. “I mean, I played the wing. I didn’t really take an emphasis on rebounding, but after Charles [Bassey] kind of got hurt, 6’5” was our tallest player, so someone had to go [get rebounds], and that’s what I do.

Junior guard Taveion Hollingsworth was the only other Hilltopper to reach the 20-point threshold, as he finished the game with 23 points, six rebounds and two assists. Freshman guard Jordan Rawls also added 10 points for the Hilltoppers.

Graduate guard Camron Justice made his second consecutive start for the Hilltoppers, replacing Anderson at the three. Justice scored two points across 26 minutes.

UTSA outshot the Hilltoppers, shooting 41% and adding 14 second-chance points. The Roadrunners also shot a perfect 10 for 10 from the free-throw line.

Junior guard Jhivvan Jackson reached his season average of 27 points on Saturday, scoring 14 points in the second half and six points in the overtime period. Jackson led the Roadrunners, making all of his eight shots from the charity stripe.

Junior guard Keaton Wallace added 25 points after leading the Roadrunners with 16 points in the first half. Wallace finished with six rebounds and three assists in 44 total minutes.

freshman center Jacob Germany controlled the opening tip for UTSA, and Wallace scored a jumper just 25 seconds into the contest.

WKU regained the lead at the 13:35 mark when Savage scored a hard-nosed basket, giving the Hilltoppers a 13-11 advantage.

The Hilltoppers went on a 6-0 run, taking a 15-11 lead until Wallace finished a layup attempt at the 12:02 mark, cutting the UTSA deficit to just two points.

Jackson started the game 3 for 3 for the Roadrunners, but he missed his first shot of the game at the 10:45 mark, allowing the Hilltoppers to get out in transition. Anderson got fouled on a layup attempt, and WKU reached the bonus at the 10:37 mark.

Anderson converted both free throws, and Savage kept the run alive by knocking down his first triple of the afternoon. He increased the Hilltopper lead to 22-15 at the 10:03 mark.

The Hilltoppers took care of the ball early against the Roadrunners, as WKU didn’t turn the ball over until the 8:45 mark.

On WKU’s next possession after the turnover, Savage netted another triple, keeping WKU’s lead comfortable at 25-18 with 8:04 left in the half.

WKU’s seven point lead quickly disappeared, as Germany scored and then Wallace drained a 3-pointer to cut the Hilltopper lead to just 25-23 at the 6:34 mark.

The Hilltoppers reached the free-throw line for a one-and-one attempt at the 5:26 mark, but Williams missed his third consecutive free throw.

WKU kept increasing its lead, going up by 11 points with only 2:27 left in the half after Rawls converted a pair of free throws and then Anderson rocked the rim with a dunk.

UTSA cut the Hilltopper lead back to single digits at the 1:38 mark, but Hollingsworth netted another shot to give WKU a 38-27 advantage at the 1:23 mark.

The Hilltoppers held their largest lead of the half after Savage netted a pair of free throws with 49 seconds left, putting WKU ahead 41-29 .

Wallace drained his second 3-pointer of the game and redshirt sophomore Adrian Rodriguez scored as the halftime buzzer sounded, cutting the WKU lead to 41-34 at intermission.

In the first half, WKU controlled the lead for a total of 14:03 of clock time, shooting 45% from the floor. UTSA outshot the Hilltoppers in the first half by shooting 50%, but WKU only committed two turnovers through 20 minutes.

Both teams ended the first half with four 3-pointers. Savage led the Hilltoppers with three triples, 13 points and seven rebounds across 20 minutes of action.

Hollingsworth was the only other Hilltopper player to reach double figures in the first half, as the Lexington native scored 11 points while recording two assists and two rebounds in 18 total minutes of playing time.

Wallace led all scorers in the first half with 16 points for the Roadrunners. The Dallas native also added three rebounds and a pair of assists in 19 minutes.

Germany scored the first bucket of the second at the 19:36 mark, but Rawls answered with a jumper just 20 seconds later, boosting the Hilltopper lead to 43-36.

Justice failed to score in the first half, but he quickly got into the scoring action just 1:25 in the second half, as the graduate guard netted a pair of free throws. Germany scored his second basket of the half to bring the Roadrunner deficit to just three points at the 17:27 mark.

The Hilltoppers struggled to begin the second half, going 2-of-8 from the field early in the half and allowing UTSA to cut the WKU lead to just 47-46 at the 13:52 mark. Germany regained the lead for the Roadrunners at the 13:22 mark, as he scored his eighth point of the half to give UTSA a 48-47 lead.

WKU missed eight straight from the field and only made 1-of-14 attempts at one point, but Rawls ended a scoreless streak of over four minutes by draining a 3-pointer. His shot gave WKU a 50-48 advantage at the 10:52 mark.

Wallace recorded his 20th point of the game at the 10:19 mark, tying the score at 50-50. Jackson recaptured the lead for the Roadrunners at the 8:51 mark, but Savage put the Hilltoppers back ahead 54-53 after he knocked down two free throws at the 7:41 mark.

Jackson drained another 3-pointer, putting the Roadrunners back ahead, 56-54. Savage regained the lead once again for the Hilltoppers from the line, as the Bowling Green native netted both of his free throws to give WKU a 58-56 at the 5:55 mark.

Just 12 seconds later, Jackson netted a pair of free throws at the charity stripe and tied the score at 58-58. Jackson reached the free-throw line again at the 5:10 mark, where he swished both of his shots to give the Roadrunners a 60-58 lead.

Hollingsworth evened the score at the 4:25 mark, but Wallace scored a left-handed layup to give UTSA a 62-60 lead.

The Hilltoppers evened the score up once again at the 2:10 mark, as Hollingsworth knocked down a jumper. Jackson regained the lead for UTSA with 1:48 left in the game, as he kissed a shot off the glass and boosted the Roadrunners to a 64-62 lead.

Hollingsworth knocked down another jumper with 41 seconds left to knot the game at 64-64. The Hilltoppers got a stop on the other end, and Stansbury called a timeout with 9.4 seconds left in the game.

WKU had the final shot of regulation, and Hollingsworth tired a baseline jumper to win the game over the Roadrunners. The junior guard’s last-ditch effort was off the mark, and the game was sent to an overtime period.

UTSA gained the first possession of overtime, but the Hilltoppers scored first. Savage drained his fourth 3-pointer at the 4:18 mark to give WKU a 67-66 lead.

Jackson broke the defense down and converted a right-handed layup with 3:51 left in the game, cutting the WKU lead to just a point.

Anderson became the fourth Hilltopper player to reach double figures at the 3:45 mark, as he swished in a pair of free throws to give WKU a 69-66 lead.

Williams started the game by going 0 for 3 from the charity stripe, but the Owenton native swished in both of his free throws when it mattered. His clutch shots increased the Hilltopper lead to 73-68 lead with 57 seconds remaining in overtime.

Jackson answered the bell for UTSA, as he cut its deficit to just two points with 48 seconds left by draining his third triple of the afternoon. His shot cut the Hilltopper lead to 73-71.

Hollingsworth made his way back to the line, where he remained perfect. He converted two free throws and expanded the WKU lead to 75-71 with 29.6 seconds left.

The Hilltoppers got a stop on the other end, but Hollingsworth missed two straight free throws and the Roadrunners had a possession down four with under 18 seconds remaining.

The Roadrunners fouled Savage with .9 seconds left, and he knocked down both of his foul shots, allowing the Hilltoppers to escape with a four-point victory on the road.

Following the win, the Hilltoppers will enter the second phase of their conference slate after the release of the C-USA Bonus Play schedule on Sunday afternoon.

2020 is the league’s second year utilizing the innovative format, which places teams in one of three groups based on conference standings through the first 14 games of league action and guarantees conference tournament seeding within that group.

Sunday’s release will include the full schedule, including start times and TV selections.