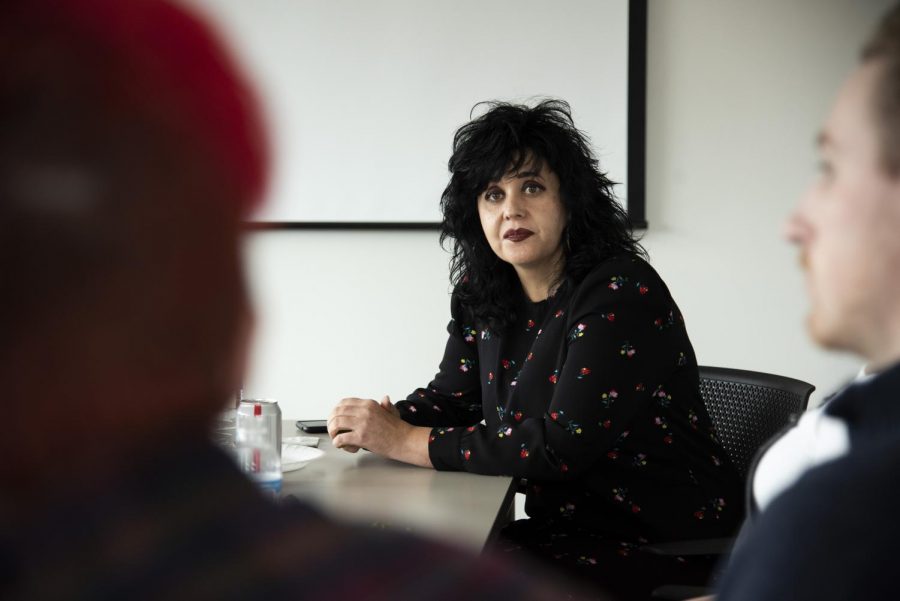 Elanie Steyn, area head for Journalism, Gaylord College of Journalism and Mass Communication at the University of Oklahoma and candidate for the position director of the WKU School of Media, attended a luncheon with SoM students before her presentation to the school on Thursday, Feb. 21.

Editor’s note: A previous version of this article contained several inaccuracies which have been corrected. The Herald regrets these errors.

The presentation process of WKU’s search for the new director of the School of Media came to an end Thursday afternoon with Elanie Steyn, who obtained higher education from two countries and grew up in South Africa.

“[Studying in London] sort of opened my eyes,” Steyn said. “I realized that at some point in my life, I want to live somewhere else again.”

In 2007, after serving first as a lecturer and then a senior lecturer at her Alma Mater in South Africa, Steyn did just that. As she said in her lecture, she interviewed with the University of Oklahoma via Skype and accepted a job there before she’d ever laid eyes on it.

Upon joining the faculty within the University of Oklahoma’s Gaylord College of Journalism and Mass Communication, Steyn’s belongings had not finished being shipped from South Africa before she received a life-changing offer from a co-worker.

Steyn had the opportunity to work with female journalists in Bangladesh for two weeks over the winter break soon after joining the University of Oklahoma faculty.

After returning to the University of Oklahoma, Steyn became an associate professor in 2013, before ascending to her current position as the area head for journalism for the university’s Gaylord College of Journalism and Mass Communication.

Steyn described her leadership style as being proactive and to empower people to become leaders as well.

Steyn was originally scheduled to present on Thursday, Feb. 13, but had to postpone her visit to WKU due to an incident at the University of Oklahoma which involved a professor who compared the use of the phrase “Ok Boomer” to the use of a racial slur, as reported in a previous Herald article.

The incident demanded Steyn’s attention, according to a comment in the previous article from Kristina Arnold, the head of the search committee.

Thursday afternoon, the incident came up again during the Q&A section of Steyn’s presentation, where she then explained how OU is dealing with the issue.

Steyn explained that the first response was to talk to everyone involved, which included the students who were in the class at the time.

From there, she said it was important to hear every angle including listening to what students, the university and the faculty member in question, who has been with the college for decades, had to say.

Steyn’s presentation marks the fourth and final one in the process that has spanned the last two weeks on WKU’s campus. No hire has been announced yet.