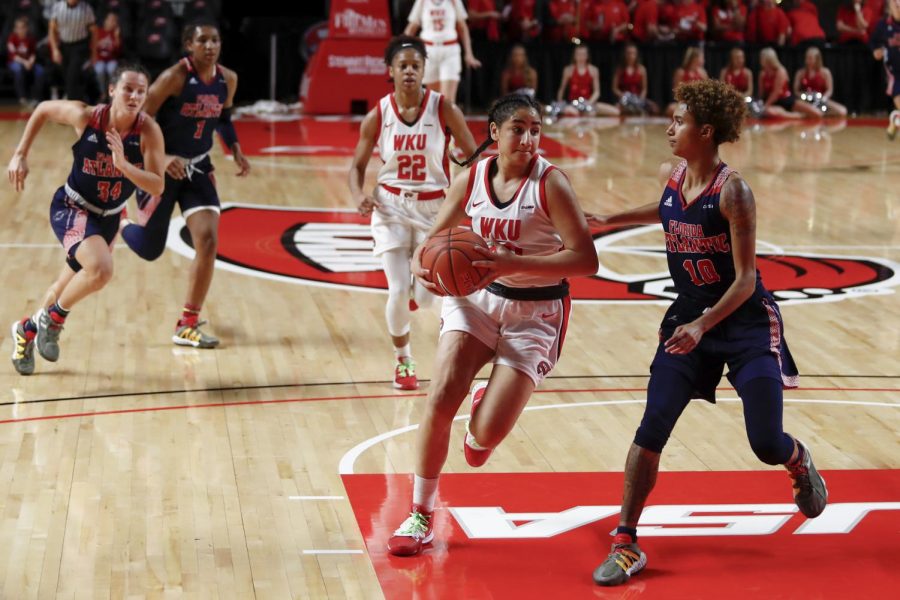 Sophomore guard Meral Abdelgawad drives towards the baskets during the Lady Toppers’ 68-59 win over Florida Atlantic in Diddle Arena on Thursday, Jan. 30 in Bowling Green.

The WKU women’s basketball team (20-6, 12-3 C-USA) claimed its 10th straight game in Conference USA play at Florida Atlantic (12-14, 6-9 C-USA) on Saturday, as the Lady Toppers were able to keep the feisty Owls at bay during a tough 69-56 road win in RoofClaim.com Arena in Boca Raton, Florida.

WKU’s nine-game winning streak was already the 15th longest in the nation, and the Lady Toppers bested that mark by extending their winning streak to 10 straight games.

WKU came out victorious in its second meeting with FAU this season and 22nd all-time matchup, but head coach Greg Collins said he wanted to see his team play with a bit more intensity, especially during an ice-cold stretch late in the opening half.

“We’ve just got to get more locked in,” Collins said. “I don’t know if it was fatigue from the travel or playing a game less than 48 hours ago, but we weren’t as sharp mentally at reading the defense.”

The Lady Toppers have made it a top priority to win the rebound battle each game, and WKU did that once again, grabbing 42 rebounds compared to 35 from the Owls.

Despite its overall successes, WKU had difficulty converting at the charity stripe, finishing just 15-of-29 from there. FAU only missed a single free throw, shooting 12-of-13.

Junior forward Raneem Elgedawy tallied just two points and five rebounds in the first half, but she exploded in the second half to finish with 20 points and 14 boards. The Alexandria, Egypt, native’s efforts yielded a double-double for the seventh time in the last nine games.

FAU had a tough time maintaining possession, committing 22 turnovers. Many of the Owls found themself in foul trouble, as five of the Owls had three or more fouls. The Owls also struggled to shoot the ball, only shooting 35% from the field.

Sophomore wing Juliette Gauthier paced the Owls, posting a double-double with 20 points and 11 rebounds in 40 minutes of action. Graduate guard Crystal Primm added 17 points, eight rebounds and three assists in 38 minutes on the floor for FAU.

Elgedawy dished out an assist to a cutting sophomore guard Meral Abdelgawad, who converted a shot in the paint to put the Lady Toppers ahead 2-0 at the 9:14 mark in the first quarter.

Elgedawy started the scoring run with a pair of made free throws. Elgedawy and Givens also recorded steals that led to back-to-back transition layups for the Lady Toppers.

FAU responded with two straight buckets to cut its deficit to 10-9 at the 3:37 mark, but Givens capitalized once again in transition. Givens snagged a steal and finished the layup on the other end to make the score 13-9 with 3:15 left to play in the first quarter.

The Lady Toppers got hot again, mounting a 9-0 scoring run in the last 3:25 of clock time in the opening quarter. FAU struggled mightily during the final 3:37 of clock time, failing to score, committing five turnovers and posting a 1 for 7 mark on its final shots from the floor.

Primm netted a layup for FAU to open the scoring in the second quarter, but redshirt freshman Myriah Haywood banked in a jumper to put the Lady Toppers back up by double digits. Her shot made the score 21-11 at the 9:02 mark in the second frame.

The game of runs continued into the second quarter, as the Lady Toppers went on a 6-0 scoring run early in the second period and claimed a 25-11 lead with 7:44 to play before halftime.

Haywood and junior forward Fatou Pouye helped WKU continue adding onto its lead, as both bench players netted shots to put the Lady Toppers ahead 29-15 at the 4:36 mark.

Gauthier willed FAU back into the contest, netting back-to-back jumpers and a pair of shots from the stripe to cut the Lady Topper lead to 29-21 with 34 seconds left in the second quarter.

Primm drilled one last shot from the foul line, allowing the Owls to close out the quarter on a 7-0 scoring run over the last 4:11 of clock time in the first half.

Despite failing to score for the final 4:36 of clock time in the second period, the Lady Toppers maintained a 29-22 lead heading into the locker room for halftime.

WKU missed each of its last five shots from the floor, and the Lady Toppers also turned the ball over three times in the final 4:36 of clock time, finishing the first half with seven miscues.

The Owls carried their positive momentum into the third quarter, as Primm started the quarter with back-to-back layups to cut the FAU deficit to 29-26 with 8:59 left to play in the third.

The Lady Toppers ended a scoring drought that lasted over six minutes of clock time after redshirt senior guard Alexis Brewer hit a free throw at the 8:39 mark.

WKU carried that momentum to a 7-0 scoring run, which was capped by Elgedawy hitting her first layup after an 0-for-6 start from the floor in the contest. She went on a hot streak following her first make from the field, draining three consecutive layups for the Lady Toppers.

Elgedawy’s heroics helped WKU claim a 42-34 advantage over the Owls with 4:41 left in the third quarter, but sophomore forward Amber Gaston buried a 3-pointer for FAU and sliced the WKU advantage to 42-37 with 4:23 left to play in the third period.

Givens converted an old-fashioned three-point play at the 3:09 mark in the third quarter, putting the Lexington native in double figures with 10 points and WKU ahead 45-37.

Elgedawy grabbed her own miss, and she converted the second-chance attempt to extend the WKU lead to 47-39 with 2:36 left to play.

The Lady Toppers closed out the third quarter on a 6-0 scoring run, which allowed WKU to head into the fourth and decisive frame with a 53-42 lead.

Primm cut the FAU deficit to single digits following her 2-of-2 trip to the charity stripe, which put the game at 53-44 with 8:55 left to play in the fourth quarter.

Elgedawy and Givens sank layups on back-to-back possessions to put the WKU ahead 57-44 with 8:03 left to play in the final quarter.

The Lady Toppers went scoreless for around two minutes of play midway through the fourth quarter. The drought ended after a made free throw by Haywood at the 5:54 mark.

Brewer extended the WKU scoring run to 9-0 after a pair of made free throws with 1:39 left to play in the competitive contest, making the score 67-49 in favor of the Lady Toppers.

Gauthier and Primm continued to make shots down the stretch, but their combined efforts simply weren’t enough to overcome WKU’s sizable advantage.

Abdelgawad sank a layup with 40 seconds left on the game clock, helping the Lady Toppers come away from the Sunshine State with a 13-point road win.

Following the win, the Lady Toppers will travel to Murfreesboro, Tennessee, before continuing C-USA play against Middle Tennessee State (17-9, 9-5 C-USA).

The game will be available on ESPN3.