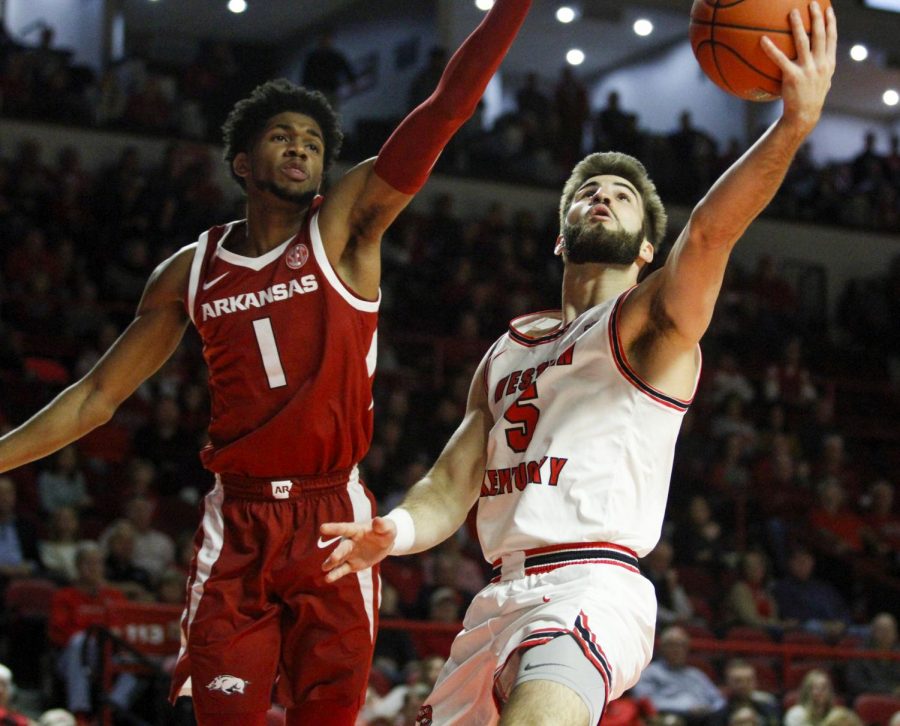 WKU guard Camron Justice (5) goes up for a layup over Arkansas guard Isaiah Joe (1). The Hilltoppers defeated the Razorbacks 86 - 79 in Diddle Arena on Saturday, December 7, 2019.

The WKU men’s basketball team (16-8, 9-3 C-USA) locked up its guaranteed spot in the top pod of Conference USA Bonus Play, which is the league’s name for the last four games of conference play, over the weekend by improving to 11-1 in Diddle Arena this season.

Bonus Play begins in two weeks, and the Hilltoppers moved into sole possession of the No. 2 spot in the league table after posting two crucial home wins over Louisiana Tech (17-7, 8-4 C-USA) and Southern Mississippi (7-18, 3-9 C-USA) on John Oldham Court.

WKU came into the weekend desperately needing results, especially after dropping two straight games during its Florida road trip two weeks ago, and a fatigued group of Hilltoppers was able to bounce back after injured graduate guard Camron Justice returned to form.

Justice only played eight minutes during the Florida swing after re-injuring his back in the first half of a 69-65 loss at Florida Atlantic, but he returned to the hardwood against LA Tech and gave the Hilltoppers the energy they were missing in the Sunshine State.

“It was good to have Cam Justice’s body back,” head coach Rick Stansbury said. “When you get his body back, he is capable at any time to do what he did tonight, and that’s huge for us. We didn’t have his body the last game and a half in Florida.”

Stansbury has said on numerous occasions that WKU’s margin for error is slim, and it narrowed after the Hilltopper bench failed to record a single point against FAU and Florida International, forcing Stansbury to play four of his five starters for 36 or more minutes in two losses.

WKU showed zero fatigue against the Bulldogs, knocking off one of the top contenders in C-USA by a comfortable margin. Miraculously, Justice made his return to the lineup, and the IUPUI transfer scored 11 points in 21:16 of action off the bench.

Two days later, Justice opened the game by shooting 1 for 9 from the three-point line against Southern Miss. He kept letting it fly, eventually putting the game out of reach when he drained a clutch 3-pointer in front of the WKU bench with just 26 seconds left on the game clock.

Justice not only added another body to WKU’s rotation over the weekend, but the 6-foot-3-inch guard also thrived in his new role as the team’s sixth man, providing double-digit scoring displays and playing 21-plus minutes in each of the Hilltoppers’ two wins.

Stansbury said Justice has been listed as non-contact in practice since early January, meaning it’s been hard for the upperclassman to get into a groove if he doesn’t get to play in games.

“Once you play this time of the year, you start to get a little rhythm back,” Stansbury said. “We have confidence in Cam Justice at any time to jump up and make shots. Even when he’s not making shots, he gives you great experience. He gives you a guy to see the next play happening, and he’s very valuable for our team.”

The Hilltoppers are a much different team with Justice on the court, as his presence allows others to catch a breather more frequently. The locker-room leader also gives WKU an increased potential to score the basketball whenever he’s in the lineup.

“It just makes it harder to guard [us], I think,” Justice said when asked about what his return means for the Hilltoppers. “Especially with the six that we’re playing with. Scoring is pretty even, so take your pick with whoever is having a good night.”

WKU seems to be headed in the right direction, but matchups against each of the top three scorers in C-USA await the Hilltoppers when they play at Texas-El Paso (13-12, 4-8 C-USA) on Thursday and Texas-San Antonio (11-14, 5-7 C-USA) on Saturday.

Justice has been battling back issues since injuring himself lifting weights earlier in C-USA play, but he’s content to keep working and preparing himself for marquee games down the stretch.

“It’s been very frustrating,” Justice said. “But you know, it is what it is. I wake up every day and see how it goes and go from there.”