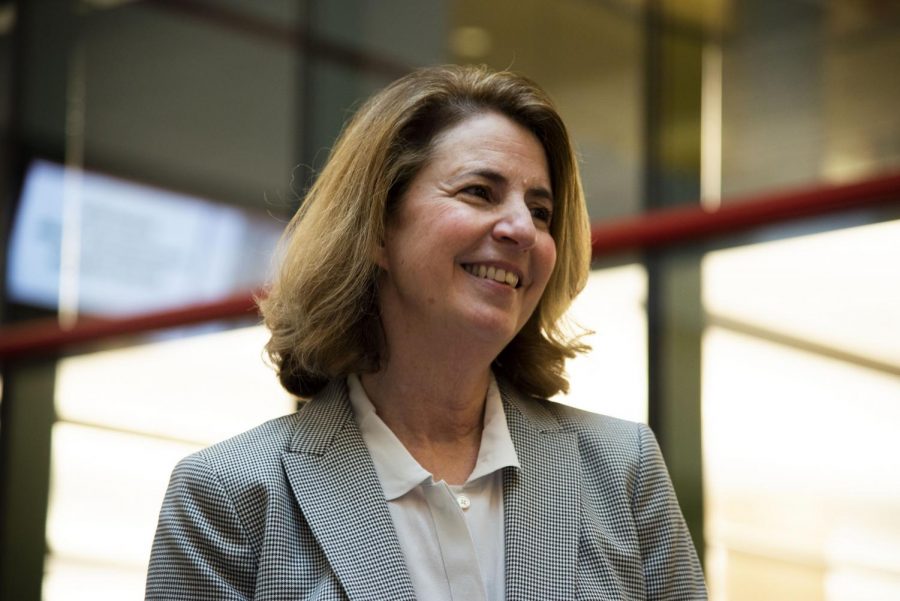 Debora Wenger, assistant dean for partnerships and innovation at the University of Mississippi, is a candidate for the position of director of the WKU School of Media. Wenger gave her speech to SoM faculty, staff and students on Feb. 18.

The search for WKU’s new director of the School of Media continued Tuesday afternoon with a presentation by Debora Wenger.

In her presentation, Wenger began by introducing her reasoning for wanting to join WKU’s faculty as the director of the university’s School of Media, one of which was hearing a consistent positive commentary surrounding the work of students and faculty. She also addressed her reasons for seeking the Director position in the Q&A section of the presentation.

“I love the storytelling focused within the school,” Wenger said. “And the fact that it has such well recognized and highly regarded partners, especially among educators in media fields that know what WKU stands for in terms of quality.”

Hailing from North Dakota, Wenger’s work history began with smaller news outlets, such as the New Salem Journal and the Hebron Herald. She moved to work within TV Stations such as WBBH-TV, WSOC-TV and WFLA-TV.

Currently, Wenger serves as assistant dean for partnerships and innovation within the University of Mississippi’s Meek School of Journalism and New Media and took time to discuss her focuses that partner with other responsibilities in that role.

“As an academic, I mainly concentrate on scholarship at the intersection of professional practice and scholarly work, so I feel like the work that I do in research influences not only my teaching but the curriculum development that I’ve done,” Wenger said.

Wenger described her personal leadership style as a servant leader that sees her job facilitating the success of students, faculty and staff and making sure that everyone involved in the School of Media has the best experience possible. She also placed value on the concept of shared governance.

“The idea is that we have to be collaborative, we have to work together to find the best solutions to benefit the most people,” Wenger said.

Wenger said during the Q&A that she saw many opportunities with recruitment and coming up with strategies to expand WKU’s reach and seeking out partnerships to benefit the WKU School of Media.

“What I see this position doing is fundraising and helping the school find those partnerships, like we have at the University of Mississippi, that will help grow its national profile,” Wenger explained.

Another point of discussion was Wenger’s views of the four programs within the School of Media and how they work together in the context of convergence, which she elaborated on using the term multimedia.

“I like the concept of multimedia better because I see that as a way to tell more people the story,” Wenger said. “I think in recent years I’ve seen it evolve from a combination of text and photo and video and audio and data visualization to a new definition that brings in an idea.”

Before Wenger’s current position at the University of Mississippi, she previously held positions as an associate professor of Media Convergence and New Media within Virginia Commonwealth University’s School of Mass Communications and at the University of South Florida as an adjunct instructor within the college of Mass Communications. Courses Wenger has taught include multimedia reporting, Media Management, Newscasting, Covering Modern China, Mass Media in Society and Writing for Radio and Television. She has written three books and been published many times in academic journals.

She remains involved with teaching while holding an administrative role through participating in teaching/training programs such as the Society of Professional Journalists Training Program, the Google News Lab and the U.S. Speaker Program at the State Department.

The search for the next director of the School of Media will see a presentation from its third candidate, Lisa McLendon, on Wednesday afternoon at 3:00 p.m. in Jody Richards Hall 166, which will be followed by a public reception.