‘We can do hard things’ 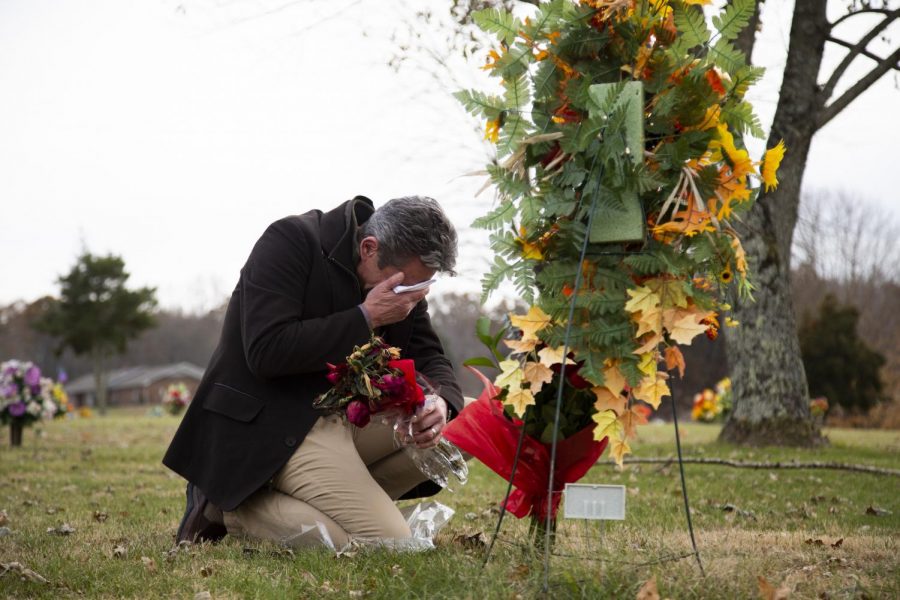 Randall Davidson visits the grave of his wife, Megan, every Sunday. "You'll never get over it, you don't want to", Davidson said, "It changes you." Megan passed away unexpectedly in a car accident on July 29 2019, leaving Randall to raise their 8-year-old son.

8-year-old Drew Davidson may not physically have his mom with him, but she left behind a plethora of notes, photographs and people to remind her son of how loved he is. In a photo album she made for him, Megan Davidson wrote, “To my son. Never forget that I love you. Life is filled with hard times and good times. Learn from everything you can. Be the man I know you can be. Mom.”

Megan did not know she would die when she did. She didn’t have a terminal illness or an exceptionally rough life. She passed away in a car accident that no one saw coming. She loved people more than well enough, and people who knew Megan will never be left wondering whether they were loved.

“You’ll never get over it,” Randall Davidson said. “You don’t want to. It changes you.”

Megan was a pillar in Bowling Green. She graduated from WKU with a nursing degree in 2007 but would care for the city in more than just medicine.

While working long hours at the hospital, she made a deal with herself and God that if she could get a daytime position or job then she would start attending church again.

“Once she started it, it was like an avalanche of ‘we can do this’ and ‘we can do that,’” Deanna Hanson, Megan’s former nursing professor and friend, said.

Prior to her passing, Megan helped start Bowling Green’s first mobile grocery, which delivers fresh groceries to food deserts in the city. On Oct. 16, 2019, members of Broadway United gathered to rename the bus to Megan’s Mobile Grocery. It would have been her 35th birthday.

According to Hanson and some of Megan’s other friends, she always wanted to get involved, not just donate money or watch from afar.

“She didn’t love at a distance,” Laura Vincent, Megan’s friend and a pastor at Broadway United Methodist Church, said.

One comment left on Megan’s online obituary read, “I didn’t know Megan, but the outpouring of love shows she was loved and will be missed by everyone’s life she touched.”

She spent time ministering to students at the Foundry, helped at Phoenix Rising, co-founded and hosted the Embrace women’s conference at her church and did countless other things to better serve the community.

“She was the spark that ignited it all,” Vincent said with a smile. “Once she had an idea, she’d ask you about it, but you couldn’t really tell her no.”

Megan also served as chaplain to Hotel Inc., which assists the less fortunate in finding housing, job opportunities, food and community in Bowling Green. Vincent said Megan spent hours counseling the people there, and she never forgot a single person she met.

“You have to love people really hard and really well,” Kinney said as she sat in her office, tears rolling down her cheeks. She said this was one of the lessons she learned from Megan and wanted to implement in her own life to honor her friend.

They spoke on the phone nearly every day after work at 4:30 p.m. Kinney said Megan would always be munching on chips of some kind — usually a healthier option like tortilla chips — or drinking coffee. Not having those daily conversations with Megan has been the most difficult part for Kinney.

“Her running partners knew her tenacity,” Davidson said. “Her mom friends knew her motherly side. Her close friends knew a side of Megan that most didn’t. I may be wrong, but I like to think I knew all of them.”

Megan met her husband while they were both working in the E.R.

“On our first date we just drove around and talked,” Davidson said. “I fell for her so hard.”

Megan’s husband and son were at the center of her life. She stopped working as a nurse once Drew was born and later began volunteering at her church.

“She eventually began doing more than that because she was Megan,” Vincent said with a laugh. She missed Megan’s laugh, her conviction and their shared love of cupcakes. Even though Megan was a healthy eater, she and Vincent would always pick up a treat from Nothing Bundt Cakes in Nashville when they travelled there for church business.

Megan’s death affected the lives of all 2,000 people who showed up to her funeral service. Megan was a wife, mother, nurse, church minister and athlete and was loved by everyone she met.

“I miss the way she loved me,” Vincent said. “Not everyone has someone to love them as deeply as Megan loved people.”

According to Kinney, watching Drew grieve has been one of the hardest things since Megan’s passing.

“He gets frustrated at times because he is missing his mom, but there is no replacement,” Davidson said.

Ever since the death of his mother, Drew has become anxious when he doesn’t know where his dad is.

“He’s latched onto me now more than ever,” Davidson said. “At 8 years old, you don’t see beyond your next birthday.”

Davidson promised Megan he would raise Drew the way she wanted and tries to keep the same traditions in the house that Megan set in place.

“There’s a part of me that hasn’t accepted it,” Davidson said.

Davidson has experienced signs that Megan is still with him.

“When I came home last night there was a single curly hair on my bathroom sink that wasn’t there before,” Davidson said.

Davidson has been left to raise their 8-year-old son while still living with the grief of losing the love of his life.

On Nov. 16, the Bowling Green community raised $20,000 for Megan’s Mobile Grocery through a 5k race downtown. Runners wore shirts with Megan’s favorite quote, “We can do hard things.”

“There was a point where Drew got tired during the race and wanted to quit, and I asked him, ‘What does your shirt say?’” Davidson recalled. “‘It says, ‘We can do hard things.’ ‘Now pick up and keep going.’”