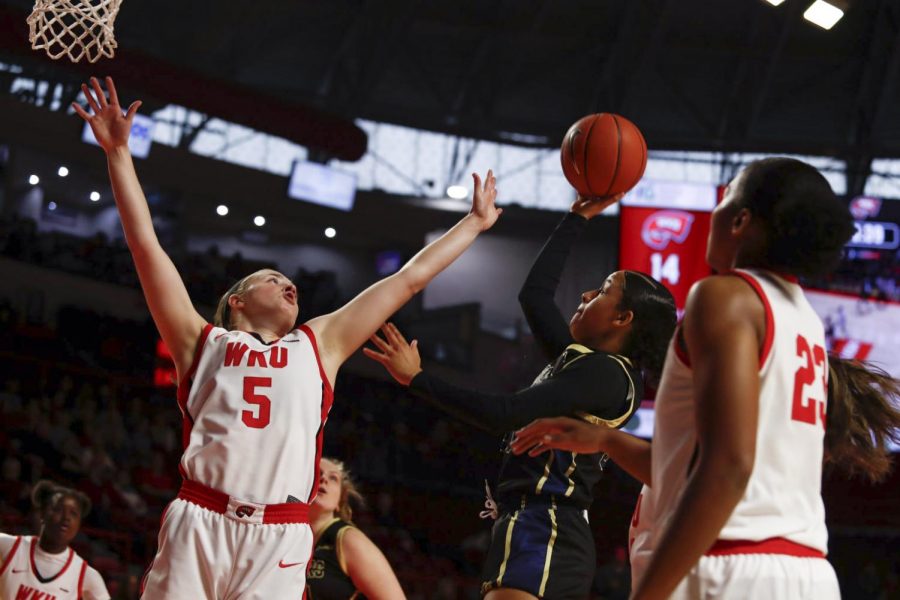 WKU senior point guard Whitney Creech (5) reaches out in an attempt to black an FIU player's shot attempt. The Lady Toppers defeated the Panthers 71-51 in Diddle Arena on Saturday, Feb. 1, 2020.

The WKU women’s basketball team (16-6, 8-3 C-USA) picked up its sixth straight win in Conference USA play on Saturday evening, as the Lady Toppers clicked on all cylinders offensively during an 81-65 road win at Southern Mississippi (11-11, 3-8 C-USA) in Reed Green Coliseum in Hattiesburg, Mississippi.

WKU entered Saturday’s game in sole possession of fourth place in the league standings, while the Golden Eagles had struggled mightily this season. Despite a 5-4 advantage in the all-time series, the Lady Toppers had dropped two straight meetings with Southern Miss.

Both squads liked to turn their opponents over and pressure the opposition on defense, as WKU and Southern Miss were No. 1 and No. 2 among C-USA teams in steals. The Lady Toppers won the steal battle 14-6, using an all-around defensive effort to ground the Golden Eagles on Saturday.

WKU shot 53% from the field, 40% from beyond the arc and 84% from the free-throw line. The Lady Toppers defeated the Golden Eagles in fast-break points 12-10, and WKU also outscored Southern Miss 24-13 in points off turnovers.

Junior forward Raneem Elgedawy finished with 11 points and nine rebounds, ending her streak of consecutive double-doubles at four games in a row.

Southern Miss shot 54% from the field, 42% from the three-point line and 57% from the charity stripe. The Golden Eagles outrebounded the Lady Toppers 30-28, but WKU still had more second-chance points, holding a 13-12 lead in the category.

Southern Miss had help from its bench, outscoring the WKU bench 20-14. The Golden Eagles also led the Lady Toppers in points in the paint, finishing with a 44-40 advantage.

The Lady Toppers picked up where they left off on Thursday, as redshirt senior guard Alexis Brewer drained a 3-pointer to give WKU a 5-2 lead with 8:30 remaining in the first quarter.

Elgedawy then hit a jumper to propel the Lady Toppers to a 5-0 run and a 7-2 lead over Southern Miss with 5:55 remaining in the first frame.

WKU’s offense stalled from there, going without a basket for three minutes of clock time. This extended scoring drought came to an abrupt halt after Givens drained a 3-pointer to give WKU a 10-4 lead with 2:48 left to play in the first frame.

Givens’ hot streak continued, as she hit another 3-pointer to give the Lady Toppers a 13-6 lead with 1:02 remaining. Southern Miss struggled in the first quarter, scoring only six points.

Following a miss by Creech, sophomore guard Meral Abdelgawad grabbed the board and finished the second chance layup with 6:46 left to play in the second quarter.

Givens was fouled on a drive to hoop, earning her a trip to the charity stripe. She went 2 for 2 from the line, giving WKU a 22-13 lead with 6:09 left to play in the second frame.

The 6-foot-1-inch forward intercepted an inbound pass and took it coast-to-coast, finishing a layup in transition with 5:40 left to play in the second quarter.

The Lady Toppers extended their scoring run to 8-0, following a layup by junior forward Fatou Pouye to give WKU a 34-19 lead with 1:36 left to play in the first half.

Pouye hit a 3-pointer of her own with 35 seconds left to play, allowing the Lady Toppers to head into the locker room with a 36-24 halftime lead.

The Lady Toppers struggled to score early in the second half. WKU came out cold, but Creech scored WKU’s first points at the 6:45 mark. Elgedawy hit a jumper on the next possession to extend the WKU lead to 40-32 with 6:15 left in the third quarter.

The Golden Eagles had made eight of their last nine attempts at the 2:55 mark, inching closer at 46-40. After a steal by Creech, Givens finished a transition layup, capping a quick 5-0 scoring run that gave WKU a 11-point lead with 2:15 left to play in the third quarter, 51-40.

Redshirt freshman guard Myriah Haywood found her way into the scoring column with a jumper, and she made her presence felt on both ends of the court. Haywood dished it to Givens, and she finished a transition layup attempt with 11 seconds to play in the third quarter.

The last-second bucket helped Lady Toppers ended the third period on a combined 12-4 scoring run, taking a 58-44 lead with them into the decisive frame.

Haywood and Givens got the Lady Toppers started, as both made jump shots to put WKU up 62-48 with 7:46 left to play in the fourth quarter.

Givens capitalized once again in transition, as she finished a fastbreak layup and put WKU up by 16 points with 6:25 left to play in the final frame.

After a made jumper, Elgedawy found herself just one rebound away from her fifth consecutive double-double with 5:44 left to play.

Following a made 3-pointer by Creech, Givens drained a deep 3-pointer from well beyond the men’s three-point line with 4:37 left to play in the contest.

Pouye converted in transition following a full-court inbound pass from Creech with 1:37 left to play. Freshman guard Hya Haywood got her first points of the game with a transition layup, pushing the WKU lead to 79-63 with 59 seconds left to play in the game.

The Lady Toppers and Golden Eagles traded a couple more made buckets, but WKU held on to its sizable advantage and clinched a 16-point win on the road.