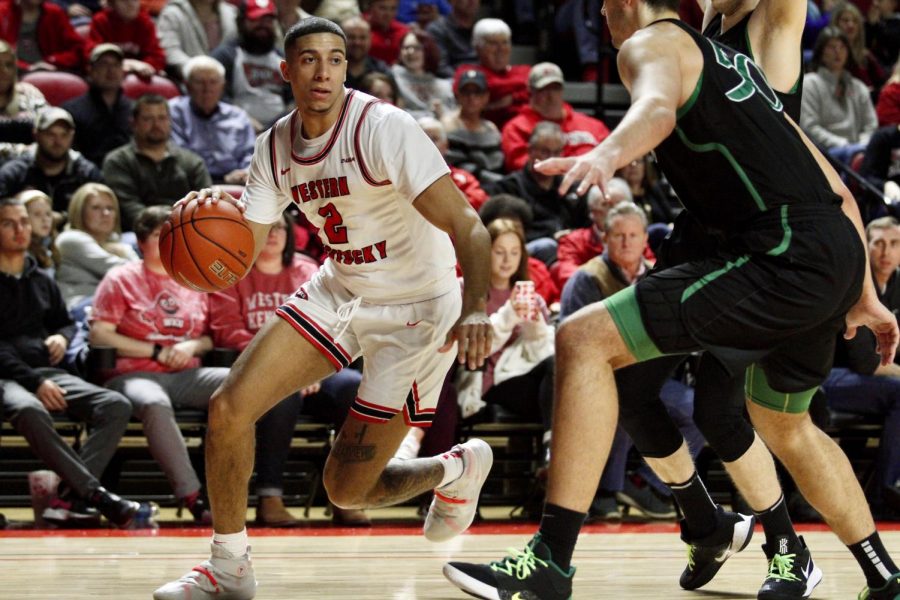 Redshirt senior wing Jared Savage (2) dribbles inside during the WKU Hilltoppers' 91-84 win over the Marshall Thundering Herd on Saturday, Jan. 25 in Diddle Arena.

Redshirt senior wing Jared Savage was named Conference USA Player of the Week for the first time in his career after achieving a double-double average for the WKU men’s basketball team in the Lone Star State over the weekend, the league office announced Monday.

Savage was just a rebound shy of a double-double in 38 minutes of action against the Miners, as the Bowling Green native tallied 14 points, nine rebounds and three steals. Savage also made four 3-pointers in that game on nine attempts, helping the Hilltoppers defeat UTEP 67-62

The senior had a season-high 24 points and a career-high 16 rebounds in a full 45 minutes in WKU’s 77-73 overtime victory at UTSA on Saturday, knocking down 4-of-6 3-pointers and 8-of-9 free throws.

Savage’s award marks the fourth different Hilltopper to be named C-USA Player of the Week on the year, tying Alabama-Birmingham’s 2010-11 squad for the most in C-USA history.

Jordan Rawls was also named the Nov. 25 C-USA Freshman of the Week, meaning five total Hilltoppers have been honored with a C-USA weekly award throughout this season.