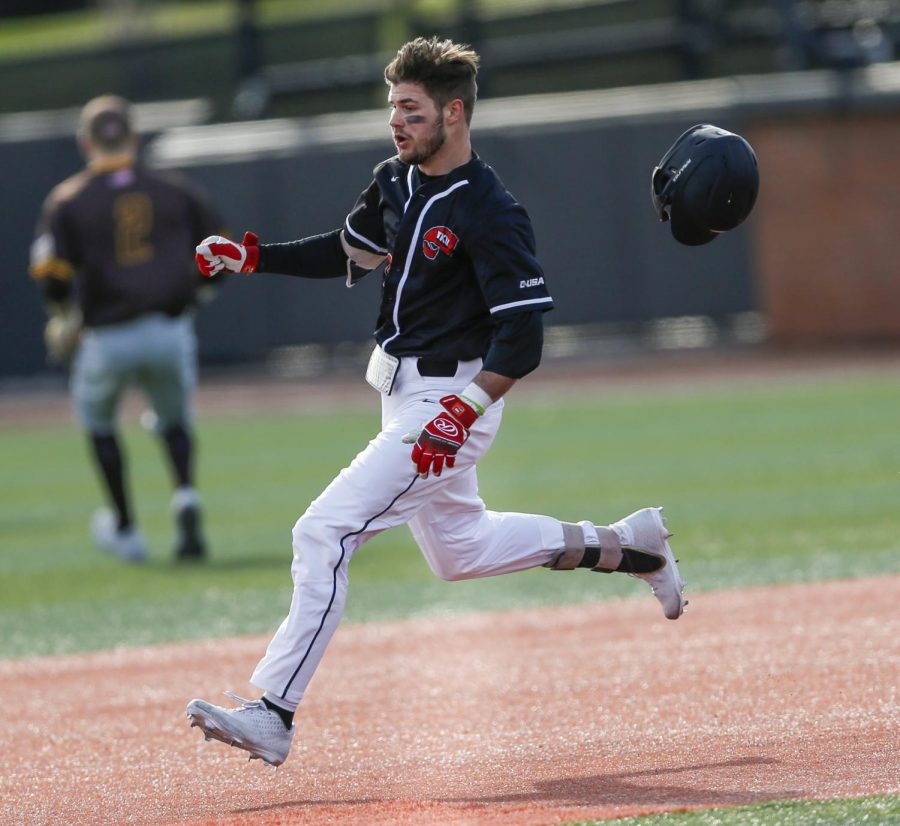 The WKU baseball team (3-1) hosted Murray State (0-4) for its first midweek game of the 2020 season on Wednesday evening, and the Hilltoppers held on in the decisive frame to defeat the scrappy Racers in a thrilling 7-6 decision at Nick Denes Field.

Like WKU’s season-opening contest against Valparaiso on Feb. 14, this game was moved due to projected inclement weather. The midweek contest was originally set for 3 p.m. on Wednesday in Murray, but it was shifted to 3 p.m. on Thursday in Bowling Green.

“I told our team I thought a game like this, after it was all over, will certainly help us down the road,” head coach John Pawlowski said. “Games are going to be close, and you have to find a way to win the close ones. We have a veteran lineup, and we want those guys to go out there and use the experience they have to help move this program forward.”

Junior pitcher Riley Boyd, a transfer from Jefferson College in Missouri, was awarded his first start on the Hill against Murray State. Boyd was selected by the Kansas City Royals in the 28th round of the 2019 MLB Draft, but he ultimately decided to enroll at WKU.

Boyd finished with 4.1 innings pitched and allowed two runs on five hits in his WKU debut.

Junior pitcher Dalton Shoemake got his second win in relief of Boyd, while redshirt junior Bailey Sutton picked up his first save of the season. Murray State starter Joe Ivey took the loss.

Murray State and WKU last met on Feb. 27, 2019, with the Hilltoppers recording a 9-5 home victory against the Racers. Wednesday’s game was another high-scoring affair at Nick Denes Field, with both teams combining for 13 total runs scored.

The Racers tacked on another run from junior first baseman Trey Woosley’s RBI double, giving Murray State a 2-0 lead over the Hilltoppers after the top half of the first inning.

Sophomore outfielder Jackson Swiney and senior catcher Matt Phipps each doubled soon after, allowing the Hilltoppers to acquire a 3-2 lead.

By the end of the first inning, the Hilltoppers were able to add two more runs. After an error by Murray State allowed Swiney to score, redshirt senior infielder Sam McElreath grounded out and allowed Phipps to score. WKU paced the Racers after the first frame, 5-2.

The Racers and Hilltoppers both posted three-and-outs in the second inning. Boyd threw a total of 36 pitches through two innings of work, while Ivey tossed 31.

Following a three-and-out inning, Perkins notched a Murray State single to right field, but his Racer teammates stranded him on base. The Hilltoppers also stranded Swiney, who tallied a single with two outs, on base to end the third inning.

Junior infielder Bryson Bloomer slashed for a single to open the top half of the fourth inning, and the next two Racer batters grounded out to advance him to third base. A line-out hit to Swiney ended the Murray State half of the inning.

Redshirt freshman Jacob Pennington came in to relieve Ivey to begin the inning. Wilson helped WKU pour on another run in the fourth inning, adding an RBI double.

Senior infielder Kevin Lambert scored for the Hilltoppers’ sixth consecutive run in the matinee game, putting WKU ahead 6-2 after four innings of action.

Shoemake came in to relieve Boyd at the top of the fifth inning. He struck out two Racer batters to get out of the top half of the fifth frame unscathed.

WKU went down swinging in the bottom half of the fifth inning, but Pennington got the Racers out of the inning and allowed Murray State to hop back to the batter’s box.

The sixth inning saw each team swing into three-and-outs, making for a quick inning. Prior to the seventh inning, Shoemake had tossed 18 total pitches across the plate.

The Hilltoppers turned a double play in the top of the seventh inning, but that wasn’t enough, as Slunder hit an RBI double to right field. The baseball went over redshirt sophomore utility player Jake Kates’ head, bringing the Racers closer at a 6-3 deficit.

WKU swung into a three-and-out half inning to conclude the seventh frame of play. Pennington struck out two Hilltopper batters to transition his team back over to the bats.

The Racers rallied back in the top of the eighth inning, as senior Jordan Cozart scored on a sacrifice fly to trim the Hilltopper lead to 6-4. Sutton replaced Shoemake after 3.2 innings of work.

Murray State pulled within one off after Sutton came in the game, recording an RBI single that scored Woosley and condensed the Racer deficit to 6-5.

Senior outfielder Ray Zuberer III hit his second home run of the season to begin the bottom half of the eighth inning, putting the Hilltoppers ahead 7-5.

“It felt great coming off the bat, and I knew it was gone,” Zuberer III said. “It felt good to get a good swing off and I knew we needed some runs, so I’m just glad I could help.”

“We aren’t having our best at-bats right now because it’s so early into the season,” Zuberer III continued. “We still have so many games to go.”

The Hilltoppers left Murray State with three more outs to work with, and the Racers took full advantage of their last-ditch opportunity.

The ninth inning saw Sutton give up two early hits and an RBI single from Perkins, making it 7-6 Hiltoppers with two outs left. The Racers advanced to second and third base after Woosely grounded out, but Wilson threw the final out to Sims and ended a high-scoring game.

WKU will be back in action at Nick Denes Field later this week, hosting Wright State (1-3) for a three-game set on Friday, Saturday and Sunday.

The Raiders also completed a single game against an opponent from the Commonwealth on Wednesday, taking down the top-ranked team for the third time in Wright State program history with a 10-3 blowout win over current No. 1 Louisville (1-3) in Louisville.