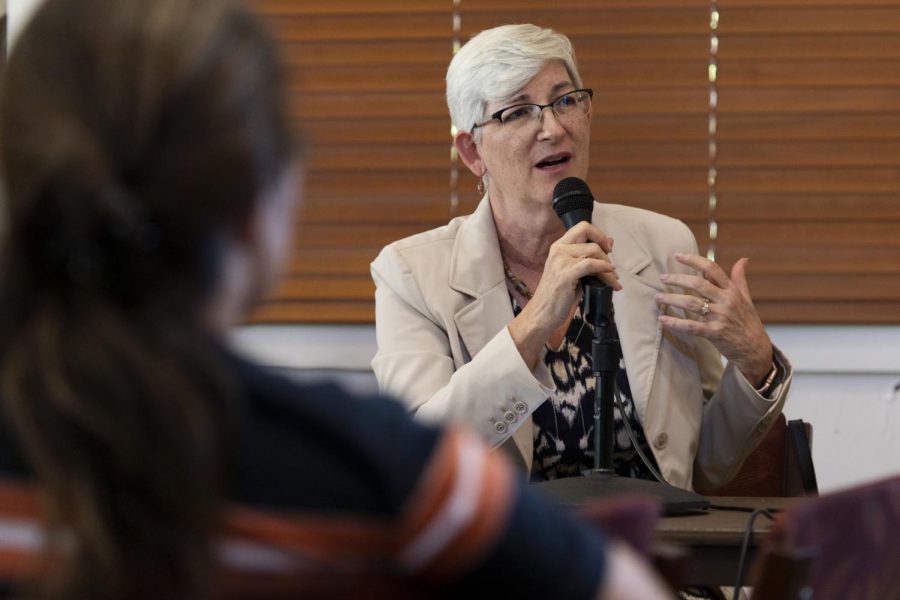 Provost Cheryl Stevens fields questions from faculty members during the faculty senate meeting on Aug. 29, 2019. The provost discussed reallocation of money in the senate budget, representation of minority student populations and a state orchestrated program evaluation.

Thursday’s Faculty Senate meeting addressed a resolution regarding the non-renewal of WKU instructors, changes in the academic calendar and the program review conducted for the Kentucky Council on Postsecondary Education.

In December, the Faculty Senate created a resolution asking WKU’s administration to rescind the instructor non-renewals and stop further action by the Dec. 15 deadline. This came after five instructors in the Ogden College of Science and Engineering were notified over email that their one-year contract would not be renewed for the following school year.

The resolution has not returned approved, but Acting Provost Cheryl Stevens said she agreed with the recommendation.

“I acknowledge that the process was flawed,” Stevens said. “It shouldn’t have happened the way it happened and I’m acknowledging that and we will work at putting together a more transparent process and will present that to you in March.”

Stevens also addressed changes to the academic calendar and how it will impact winter term classes. Stevens proposed three options to run this fall. The first option would have online winter term classes start Monday, Dec. 14 and end Dec. 30, with finals taking place on Dec. 31.

The second option would include both on campus and online classes starting Monday, Jan. 4 and ending Jan. 16.

The third option would last for five weeks, starting Monday, Dec. 14 and lasting until Jan. 16. The classes would be online in December, but could be “hybrid” in January, with students attending class on campus.

“If we do this, then we could evaluate how much interest there is in the various kinds of options,” Stevens said.

One benefit of the first option Stevens said would be students complete the course before the end of the year and could have that course posted, allowing them to graduate in the fall rather than waiting until spring.

The Program Portfolio Strategy Workshop occurred on Jan. 16 in collaboration with Gray Associates, a company that provides higher education program evaluation. It was done as a requirement of a larger program review from CPE. About 30 people from across campus, including the provost, representatives from each college dean’s office, select department heads and admissions met with representatives from Gray Associates for the two-day workshop.

The evaluation only included baccalaureate programs and excluded certificates, minors and master’s degree programs. The goal was to identify new program opportunities and to help WKU make recommendations for those new opportunities and make existing programs more relevant.

“We compared those scores to CAPE results… and then we made preliminary recommendations regarding programs using different terminology than CAPE,” Faculty Senate Chair Julie Shadoan said. “Instead of ‘grow, maintain and suspend,’ we used ‘grow, sustain and sunset.’”

WKU is required to file a formal report of the results from the workshop with CPE. The information will move to the program level to allow the faculty involved to review it and make decisions on how to go forward.

The next Faculty Senate meeting will take place Thursday, Feb. 20 at 3:45 in the Faculty House.