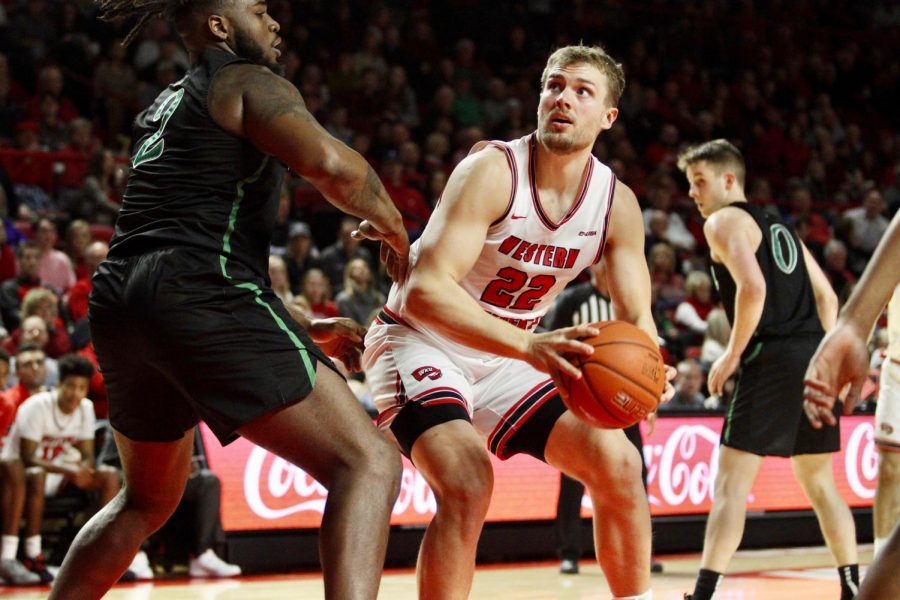 The WKU men’s basketball team (14-6, 7-1 C-USA) picked up a Conference USA series sweep over Marshall (9-12, 3-5 C-USA) on Saturday night, as the Hilltoppers secured Game 2 in the hardwood edition of the Moonshine Throwdown with a solid 91-84 victory in Diddle Arena.

WKU was able to reach a five-game winning streak with a win in the second clash between the Hilltopper and Thundering Herd basketball programs in a four-day span.

The Hilltoppers were forced to rally from a 19-point deficit in the first half to defeat Marshall 64-60 on Wednesday in Huntington, West Virginia, but WKU led by as many 14 points in its fifth straight victory in league play on Saturday in Bowling Green.

Head coach Rick Stansbury, who moved to 5-4 in his career against the Thundering Herd and helped his program gain a 18-12 lead in the all-time series, said it was huge for his team to protect its home court against Marshall in the second game of the two-game rivalry set.

“Through 40 minutes, our guys found ways,” Stansbury said postgame. “You know, we jumped up and made threes tonight, 10-of-23. We had six guys in double figures. That’s always a huge stat. That’s six guys who played minutes.”

After totalling just 64 points against Marshall on Wednesday, the Hilltoppers scored a lethal 50 points in the opening half on Saturday en route to their highest point output in 23 days.

WKU finished the night shooting 50.8% from the floor while making 10-of-23 shots from beyond the arc. The Hilltoppers also netted 17-of-22 shots from the free-throw line, making several crucial shots at the stripe when the game got tight down the stretch.

Six different WKU players reached double figures against the Thundering Herd, and Taveion Hollingsworth led the way for the Hilltoppers yet again.

Freshman guard Jordan Rawls, who made his sixth consecutive start for WKU, finished the night with 15 points after scoring 13 points in the first half.

Graduate guard Camron Justice reached double-digit points for the first time since Jan. 4, as the 6-foot-3-inch guard scored 11 points and shot a perfect 6 for 6 from the stripe.

“I just think it’s the maturity level,” Justice said about watching the team grow during the two games he missed while being sidelined with a back injury. “You know, we have guys who are really holding each other accountable every time down the floor.”

“Whether it’s some guy seeing something else and saying something to other guy and the other guy just says, ‘Alright, I’ll look for it,'” Justice continued. “There’s no one guy that feels like they’re obligated to do something or do anything like that. Everybody is cohesive and I think as time goes on, we’re just going to get better and better.”

Marshall reached the 80-point mark for the second time in eight C-USA games, as the Thundering Herd shot 47% from the floor and netted 10 made 3-pointers in their loss.

Although Williams won the opening tip for the Hilltoppers, WKU didn’t score until the Owenton native battled down low for a layup on its fourth possession.

The Thundering Herd only trailed for 13 seconds until scoring four straight points to take a small two-point advantage at the 17:44 mark, 4-2.

Marshall sprayed in a pair of 3-pointers to begin contest, jumping out to a 12-7 lead after just 3:45 had elapsed in the contest.

The Thundering Herd tacked an additional pair of 3-pointers within 20 seconds to continue its lead at 18-12. But the Hilltoppers responded, making three straight baskets from the floor and taking a 22-20 advantage into the second media timeout at the 11:37 mark.

WKU still held a 23-22 lead at the 9:48 mark, but the Hilltoppers struggled to score on four straight possessions, going over two minutes without a field goal.

Justice had been quiet from the floor since returning from a back injury that relegated him to the sideline for two games, but the IUPUI transfer swished his first jumper of the game at the 7:54 mark.

WKU had its largest lead to that point until Anderson picked up a flagrant 1 foul at the 4:51 mark. The junior guard hit Marshall freshman center Goran Mildaninovic with an errant elbow while trying to collect a rebound, sending Taylor to the line with WKU up 37-31.

Taylor made one of his two free throws to cut the WKU lead to 37-32. Marshall failed to score on its first possession after the flagrant foul, and the Hilltoppers were able to increase their lead to seven points when Hollingsworth knocked down a jumper at the 4:17 mark.

Taylor, Marshall’s leading scorer in the first half, knocked down his second triple of the half at the 3:58 mark and trimmed the WKU lead to just 39-35 with under four minutes to play.

WKU went on an explosive 9-0 run after Rawls drained his third 3-pointer of the half, as Williams scored two straight layups and Hollingsworth got in the lane and finished a right-handed floater to give the Hilltoppers a 48-35 lead with 2:04 left in the half.

Sarenac ended a WKU scoring run that lasted 1:54 of clock time by hitting his second 3-pointer of the half and sinking a foul shot to help the Thundering Herd trail 48-39.

Prior to the break, Hollingsworth swished one last jumper for WKU and West netted a foul shot for Marshall, making the score 50-40 at halftime.

WKU had only three players finish the game in double figures on Wednesday night, but three Hilltopper players reached 10 or more points by halftime on Saturday.

WKU shot an impressive 53.8% from the floor while making seven of its 16 shots from beyond the 3-point line in the opening period.

Marshall tallied seven 3-pointers in the first half, as five different Thundering Herd players converted a shot from beyond the arc.

The Thundering Herd were led by Sarenac, who collected 11 points and a steal while shooting 4 for 5 in the first half of action. Taylor added nine points across his 18:07 in the first half.

The Hilltoppers started the second half with two easy makes, and WKU controlled the pace in the opening 37 seconds to take a commanding 54-40 lead.

Savage picked up his fourth personal foul at the 18:47 mark, forcing Stansbury to sub in Justice early on in the second half.

The Hilltoppers held a 14-point lead at the 17:53 mark, but Marshall cut the WKU lead to 56-48 at the 14:59 mark after Miladinovic scored back-to-back layups for the Thundering Herd.

Williams scored a layup on the other end to push the Hilltopper lead back to double digits with 14:36 remaining in the contest, 58-48.

But Marshall quickly scored consecutive baskets, cutting the WKU lead to just 58-53 and causing Stansbury to call his first timeout of the half at the 13:09 mark.

Savage returned after WKU’s timeout, replacing Rawls. Justice gave WKU a little bit of breathing room at the 12:28 mark, as the 6-foot-6-inch guard swished his first 3-pointer of the night to give the Hilltoppers a 61-53 lead.

Marshall cut the WKU lead to 61-55 at the 11:44 mark when Kinsey swished both of his free-throw attempts.  Kinsey made his way back to the line for Marshall just 37 seconds later, but he only made 1-of-2 shots from the line during his second trip.

Savage pushed the WKU advantage back to eight points once again, as the Bowling Green native drained his third triple of the night at the 10:49 mark.

West matched Savage’s 3-pointer with a jumper at the 10:00 mark, cutting the Hilltopper lead to 64-58 and setting off a chain reaction of successful shots for the Thundering Herd.

Marshall scored on four straight possessions to cut the WKU lead to 72-67 with 7:46 remaining, but Kinsey turned the ball over on Marshall’s next possession and handed the ball back to the Hilltoppers at the 7:18 mark.

With just over seven minutes left in the game, the Thundering Herd had already turned the ball over 15 times compared to WKU only turning the ball over eight times.

But the Hilltoppers would commit their ninth turnover of the game at the 7:02 mark, allowing junior forward Darius George to slam home a dunk on the other end.

George scored again at the 5:57 mark, trimming the Hilltopper lead to just 74-71. Anderson weathered the Thundering Herd offensive storm by draining his second triple of the night and making a pair of bonus free throws to expand the WKU lead to 79-73.

Kinsey scored his 9th point of the second half with just 5:00 left in the contest, cutting the Hilltopper lead back to four points at 79-75.

The Columbus, Ohio, native scored again on Marshall’s next possession, cutting the margin to just four points once again.

With 3:30 left in the game, Hilltopper fans rose to their feet in support of the WKU players as they attempted to score on a crucial possession.

Hollingsworth reached the free-throw line for the first time of the evening at the 2:51 mark after being shoved out of bounds by George. The Lexington native was poised from the line, as he made both of his free throw attempts and stretched the Hilltopper lead to 83-77.

The Hilltoppers got a stop on defense after Hollingsworth’s made free throws, and Savage scored a basket with 2:06 left to give WKU an 85-77 advantage.

WKU allowed West to knock down his second 3-pointer of the night at the 1:51 mark, enabling Marshall to trail the Hilltoppers just 85-80.

Marshall had a chance to make it a one possession game with just over a minute left, but West was called for an offensive foul with 59 seconds remaining.

The Hilltoppers were in the double bonus with the leadm and Hollingsworth converted both of his free throws after being fouled by Kinsey with 35 seconds remaining in the game.

Marshall went empty on its next possession, and the Hilltoppers were able to make their way back to free-throw line after Justice was fouled with 17.4 seconds remaining.

He converted both of shots from the line, and he returned to the stripe with 11.3 seconds remaining. Justice became the sixth Hilltopper player to reach double figures, as WKU expanded its winning streak to five games with a seven-point victory.

Following the win, the Hilltoppers will travel to Boca Raton, Florida, before continuing C-USA play against Florida Atlantic (12-9, 4-4 C-USA) next week.

The Owls are led by graduate guard Cornelius Taylor, one of the top scorers among qualified players in C-USA with 12.5 points per game during the 2019-20 season.