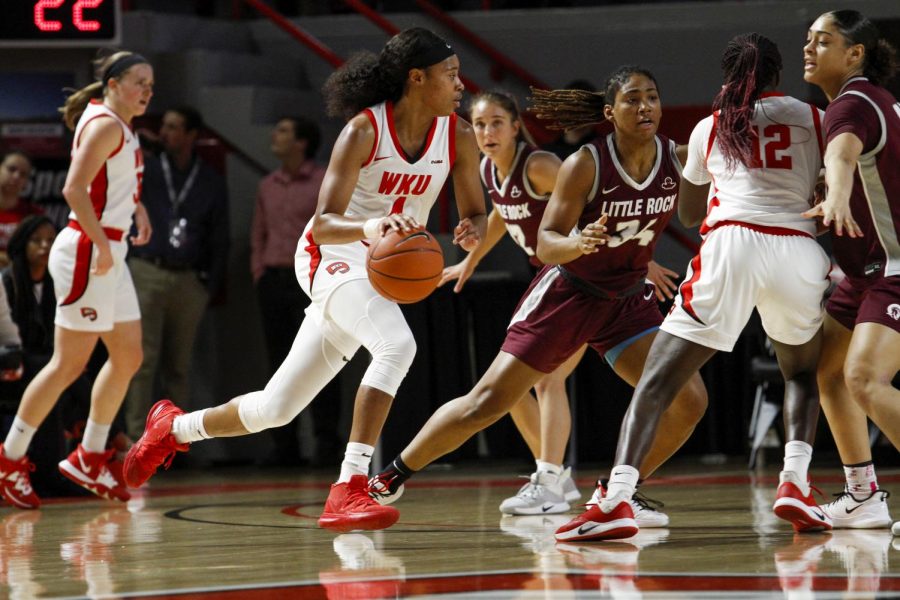 WKU foward Dee Givens (4) use the screen from Fatou Pouye (12) to dribble toward the top of the key. The Lady Hilltoppers defeated Little Rock 77-58 on November 24, 2019 at E.A. Diddle Arena.

The WKU women’s basketball team (9-5, 1-2 C-USA) played at home for the first time in 35 days on Thursday afternoon, and the Lady Toppers responded by battling until the end to earn their first conference victory of the season in a 69-65 home win against Alabama-Birmingham (9-6, 1-2 C-USA) in Diddle Arena.

WKU hadn’t taken the floor in Bowling Green since a 74-63 win over Power 5 Oklahoma on Dec. 4, but the Lady Toppers snapped that streak during their annual Education Day game, which featured 5,122 fans — many of whom were raucous students from local Bowling Green and Warren County schools — in attendance.

“It’s so exciting to come in and have such a full arena,” head coach Greg Collins said postgame. “It really speaks highly of Bowling Green and our community and how much they support Western Kentucky and the Toppers.”

Prior to Thursday’s game, WKU had also lost three straight contests dating back to a 67-50 drubbing at the hands of Power 5 Purdue in its non-conference finale on Dec. 18.

The Lady Toppers ended yet another negative streak, picking up their first win against a league foe during the 2019-20 campaign to maintain a perfect 5-0 mark in Diddle Arena this season.

“We put ourselves in a little bit of a hole,” Collins said. “We put our backs against the wall on the road. We didn’t have anything else to do but to fight back. I was really proud of the poise and the confidence that the players had, both in practice and today in the game. They were never rattled and just wanted to execute and make sure we got the win.”

The Lady Toppers shot 46% from the field, 40% from deep and 64% from the free-throw line. WKU did great work on the defensive end as well, compiling 10 steals and forcing the Blazers into 18 turnovers throughout the game.

“It was very important to get this dub,” Givens said. “Coach Collins, all week, has been preaching that these next four games is a championship, so this was our first game, and we got this W.”

UAB shot 45% from the field, 48% from beyond the arc and 73% from the charity stripe against the Lady Toppers. The Blazers did net four more 3-pointers than the Lady Toppers, but UAB held the lead over WKU for just 1:06 of game time.

Senior guard Rachael Childress came into the game averaging 17.9 points per game and 47.1% shooting from beyond the arc, leading C-USA in both categories.

Childress again spearheaded the UAB attack, dropping in a game-high 15 points for the Blazers on 4-of-7 shooting from behind the three-point line.

UAB won the opening tip, but Elgedawy attacked the paint early and often. She dropped in the first five points for WKU on strong post moves and a successful and-one opportunity.

After a 4-0 mini-run by the Blazers, Givens took charge on both ends of the floor, finishing two tough layups and collecting a steal in the process.

Abdelgawad and junior guard Sherry Porter got in on the action, extending the Lady Topper run to 7-0 and the WKU lead to eight with 4:42 left in the first.

UAB quickly responded with a 7-0 run of its own, cutting the Lady Topper advantage to just one point with 3:18 remaining in the quarter.

Vendrell then knocked down a deep-corner 3-pointer for the Blazers and stole the lead from WKU for the first time in the game with 2:35 left in the frame.

Brewer and Givens answered accordingly, draining back-to-back 3-pointers to swing the momentum back to the home team and give WKU a short-lived four point lead.

Thomas responded for UAB, scoring twice in the restricted area in the final minute to tie the game up at 20-20 going into the second quarter of play.

Brewer popped the lid of the basket with a transition three to start the second period, and the rest of the Lady Toppers responded with energy and effort on both ends of the floor.

Junior forward Fatou Pouye battled on the offensive glass and created four free throw opportunities, two of which she made.

Creech pushed the ball after yet another defensive stop for WKU and muscled her way through the contact to earn a tough and-one.

The made free throw by Creech pushed the Lady Topper run to 8-2 in the quarter and extended their lead to six with 7:20 left in the half.

After a 2:19 scoring drought by the Blazers, Childress caught fire, hitting two straight three-pointers and cutting the WKU lead to three with 3:38 remaining before the break.

The Lady Toppers answered as they had the entire first half, as Brewer drained yet another 3-pointer and Abdelgawad added a layup of her own to extend the WKU lead to eight points with 2:33 left in the second half.

UAB clawed its way back with a 5-0 run over the final 42 seconds of action. The hard-nosed Blazers cut the Lady Topper lead to 37-34 going into halftime after holding the stagnant WKU offense completely scoreless over the final 2:33 of clock time in the opening half.

Despite WKU making four of its last five shots from the field and UAB netting only one of its last seven field goals, the Lady Toppers were far from a comfortable position at the break.

Both teams came out trading buckets early in the second half, and Elgedawy led two fast breaks that resulted in two Abdelgawad layups in the first three minutes of action.

The Lady Toppers continued to attack the paint in the early going, as Elgedawy and Pouye scored back-to-back tough buckets in the lane to push the WKU run to 6-0 at the 5:33 mark in the third.

Creech and Givens also got in on the scoring, breaking down their respective defenders and getting to the rim for two easy lay-ins.

Neither team could produce any separation following the WKU 6-0 run, and the seesaw battle on the offensive end for both sides continued. The Lady Toppers clung to a narrow four-point lead over UAB with 2:14 remaining in the third quarter.

The Blazers were then able to amass a 6-0 run of their own, snatching a slim one-point lead back from the Lady Toppers with 37 seconds remaining in the period.

Givens answered with a contested 3-pointer only nine seconds later to reclaim a 52-50 lead for the Lady Toppers going into the decisive quarter.

The back-and-forth C-USA battle continued into the final 10 minutes of action, as both teams jockeyed for position. Short 4-0 and 5-0 runs dominated the first 5:22 of play for both sides.

Brewer, Abdelgawad and Elgedawy combined for a 5-0 Lady Topper run that pushed a slim WKU lead to four with 4:38 remaining in the game.

Vendrell stymied the WKU attack momentarily with a layup that cut the Lady Topper lead to two with 3:33 left to play.

But Abdelgawad came up big yet again, this time knocking down a clutch 3-pointer to swell the WKU advantage to five points only 20 seconds later.

Creech answered yet another Blazer layup with a tough floater plus the foul as the shot clock expired. The Lady Topper lead grew to six after the free throw by Creech, which was the largest lead of the quarter by either team.

Magee showcased her ability to hit huge shots for UAB, as she drained a deep 3-pointer with 1:35 remaining in the fourth to shave the WKU lead to only three.

Childress followed the bucket by Magee by drawing a foul and draining 1-of-2 free throws to cut the Lady Topper lead down to two points with 51 seconds left to play.

Brewer went to the foul line with three seconds remaining in the contest, and she closed out a hard-fought home win for WKU with two big free throws.

The two-possession lead proved to be enough to put the Lady Toppers over the top, as WKU secured its first conference win in exhilarating fashion.

Following the win, the Lady Toppers will remain at home and host league rival Middle Tennessee State (9-5, 1-1 C-USA) on Saturday.

The sister duo has racked up several C-USA weekly awards so far, taking home one C-USA Player of the Week nod and three C-USA Freshman of the Week honors.

The game will be broadcast on ESPN3.