‘Beyond the job’: WKU community remembers Barbara Burch and the legacy she left behind 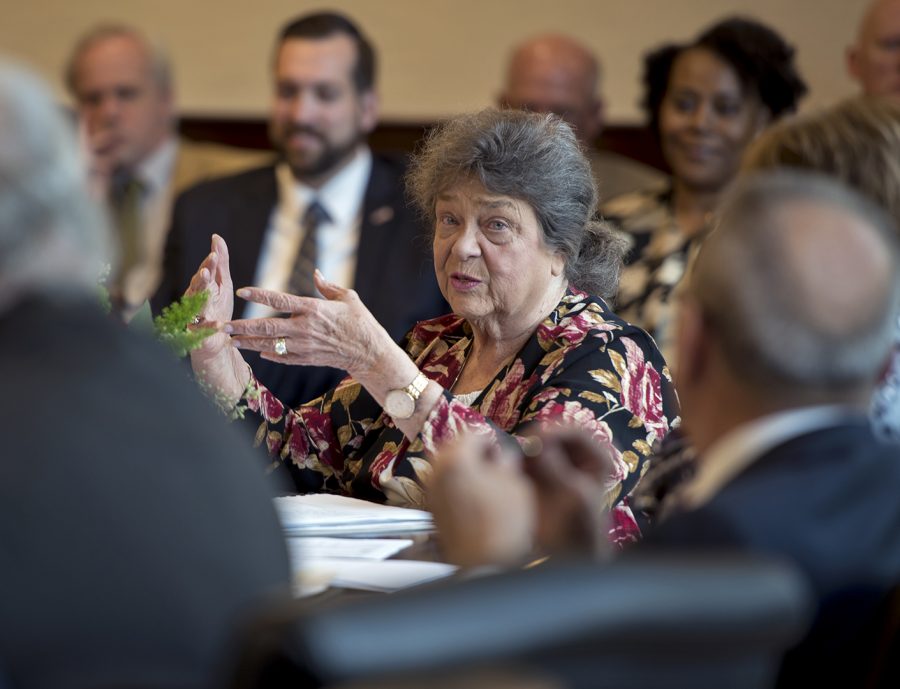 Barbara Burch served as Faculty Regent on the Board of Regents for three years from 2014 to 2017.

Barbara Burch began her time at WKU in the 1950s as an undergraduate student. After completing her degree, she returned to WKU to serve as a professor, provost, faculty regent and even made history as the only woman WKU President when she was briefly interim in 1997.

Burch died shortly after midnight on Jan. 5 in Bowling Green at the age of 81. Those from WKU who knew her well are shocked, but plan to continue her legacy and remember the impact she had on the university.

Despite the achievements and the positions, WKU’s campus and the people who worked and learned alongside her will primarily remember the genuine love, care, innovation and support she gave to so many.

When WKU Regent Julie Hinson remembers Burch, she’ll think of her smile. The two were co-founding members of WKU Sisterhood 10 years ago and served on the Board of Regents together when Burch was faculty regent for three years.

“She’s a genuinely good person and made you want to be a better person hanging around her,” Hinson said.

Throughout the years, Hinson said she and Burch formed a close friendship, while she wasn’t sure if they would like each other at first because of their different personalities. She remembered the day Burch became chair of WKU Sisterhood, where they were able to share their journey with the group.

“I had my arm around her and I gave her a big hug and I just remember getting a lump in my throat just talking about it, that we weren’t sure we would like each other and that it’s developed and here we are together promoting the sisterhood,” Hinson said. “It just makes me feel good.”

Through the WKU Sisterhood, Hinson said members contribute $1000 each and collectively provide a grant to student organizations, typically those centered or led by women. This was a way to give back to students in a significant way.

Through the Sisterhood and Board of Regents, Hinson said she learned a lot from Burch from her history at WKU, to look at things from all perspectives, to have a philanthropic mind and how to lead. She said Burch would give great pep talks and encouraged Hinson to be a great leader.

“She really believed in women as leaders,” Hinson said.

When former WKU President Gary Ransdell was hired in 1997, Burch was working as the vice president of academic affairs. Over time, he said he noticed her energy, work ethic and the vital role she played in the academic community and decided to promote her to provost.

“I always pictured Barbara full of energy and determination and always felt like she could accomplish almost anything she attempted,” Ransdell said.

Ransdell and Burch served as president and provost for about 15 years, and in that time, he said they accomplished a great deal within WKU academics and reputation which left a lasting impact. Two highlights he mentioned were the creation of bachelor’s degrees in electrical, mechanical and civil engineering and the creation of various doctoral degrees.

“That began to change how WKU was perceived academically in Kentucky and it was an important economic development initiative,” Ransdell said about the engineering degrees.

Outside of her time as provost, Ransdell said Burch continued to pursue passions well outside her job description, including her commitment to student achievement and growth.

Time after time, Ransdell said he saw how Burch was a mentor to students. Many even attributed their success and influence to her.

“She really enjoyed working with students and their dissertations to help them complete their graduate studies and get their doctorates in education, and I have no doubt, inspired them to go on and have equally successful careers in their own right,” Ransdell said.

An institute built on passion

Later in Burch’s career, her passion for student success manifested into the Kelly M. Burch Institute for Transformative Practices in Higher Education. Named after her late daughter who was also a professor at WKU, the institute is a place for innovation and student success.

Daniel Super, director of the Burch Institute, said the institute was a symbol of Burch’s constant consideration of the future, asking “why not” and raising the bar.

“She just dreamed of a place that could be as creative and innovative within the university infrastructure as possible because she’s a thinker, and that’s what’s so amazing about her,” Super said.

For many, like Super, she was a mentor, a title he considers a privilege. Not only did he get to work and learn from Burch in a classroom, Super said he was able to gain so much wisdom as her colleague and friend.

“I’m humbled to even think that she would see enough potential and capacity in me to take me under her wing and mentor me,” Super said. “She didn’t have to do any of this stuff she does.”

Planning for the institute began in 2016 and work began in January 2018 with a grand opening of the building on April 23 of that year. When the institute was created, Pamela Petty, senior advisor to the Kelly M. Burch Institute said Burch could have just helped with the red tape and been done. Still, she continued to be a regular presence in the facility by eating meals, entertaining and bringing new people to the table with the purpose of helping students.

Becoming a family to students

When it came to student success, Super said Burch wasn’t considering financial gain or an improved reputation for the university. Instead, it was about acknowledging the issues students may have that were preventing success and creating a space to access growth and potential.

“When people talk about how she was so focused on student success and all those things, that’s just because that’s higher ed’s version of caring,” Super said. “It’s not for what she was supposed to be doing for her job, it just revealed her true self.”

When Petty first arrived at WKU as a faculty member in 2000, Burch was working as provost. Even in the beginning, Petty said she knew if there was a way to help students Burch would be supportive of it. In fact, Petty said they bonded over their mutual love of doctoral students, work, research and being able to engage students.

“Nothing was more important than our students,” Petty said. “It was beyond the job she really put her money where her mouth was in terms of caring about students, from welcoming them into her home to ensuring that they had meals and food and every possible help that WKU had in place.”

Ifeyinwa Onwelumadu, an international student from Nigeria, said she found herself at a crossroads after finishing her master’s degree program at WKU in May 2016. She could either pursue a doctoral degree or leave the country.

Despite concerns over finances, Onwelumadu applied to the program and met with Burch for the first time. There, she said they just talked, but a few days later, Burch called to offer a graduate assistant position which covered the program fees and offered an additional stipend.

Over the next three and a half years, Burch became more than a boss. She became a major support system, a maternal figure and someone who constantly helped Onwelumadu succeed in tough times.

“In my own case it was like a passion, she just wanted to see me succeed,” Onwelumadu said.

In that time, Onwelumadu said Burch became a major influence on her and her children. On one occasion Burch insisted she attend a conference and offered to watch her children so she could have the opportunity. They had also established a tradition of having dinner with Burch and her husband in the days that followed Christmas.

“When my mom called me from Nigeria she asked me ‘How is your mother over there?’” Onwelumadu said. “She became family to me. There’s so many special memories.”

David Lee, former provost and current university historian, said his relationship with Burch began when he was working as dean of Potter College while she was provost. He said they spoke about every day and in that time he said saw how much of a positive and hardworking person she was.

On top of her energy, Lee said she was an outstanding leader because she always sought a positive, equal resolution to a disagreement, would never accept credit for work, but would always take responsibility for mistakes.

From those characteristics, Lee said many people looked to Burch for leadership. He said the fact she was elected as faculty regent after her time as provost was a testament to her ability to lead in a constructive way.

Outside WKU, Lee said Burch provided important leadership to some significant national organizations in higher education including the Association of American State Colleges and Universities. She was so involved that the organization awards an annual Barbara Burch for Faculty Leadership and Civic Engagement.

“She put this university above her health, above vacations and traveling and all the things most people want at the stage of life she was at,” Petty said. ”She put all that aside to be a living legacy of what leadership is.”

Many of Burch’s colleagues and friends were surprised by the news of her death and said they fully expected to continue teaching or working with her for years to come.

“This has been devastating personally because she was a mentor to me, she was a dear friend to us here at the Institute,” Petty said. “We are trying to adjust our sails to keep going without the blustering wind that she was that kept us afloat.”

With the WKU Sisterhood, Hinson said she plans on taking all the advice and lessons she learned from Burch. Personally, she also wants to be able to support the Burch Institute because of her dedication and passion for the cause.

While still mourning the loss of a mentor, colleague and friend, Petty and Super did not express concern over the future of the Burch Institute. Petty said over time she had hundreds of hours and conversations about the future and Burch’s vision, which made them like-minded. She said this has reassured her that they won’t wonder what Burch would have wanted.

Moving forward, Super and Petty want to take Burch’s implicit lessons and apply them to the institute through the spirit of innovation and asking “why not.” After years of working together on multiple levels, both are sure they can keep her passions alive.

The original version of this story reported Barbara Burch and Julie Hinson were co-founders of WKU Sisterhood. The two, among others, were co-founding members. The article has been corrected and the Herald regrets this error.