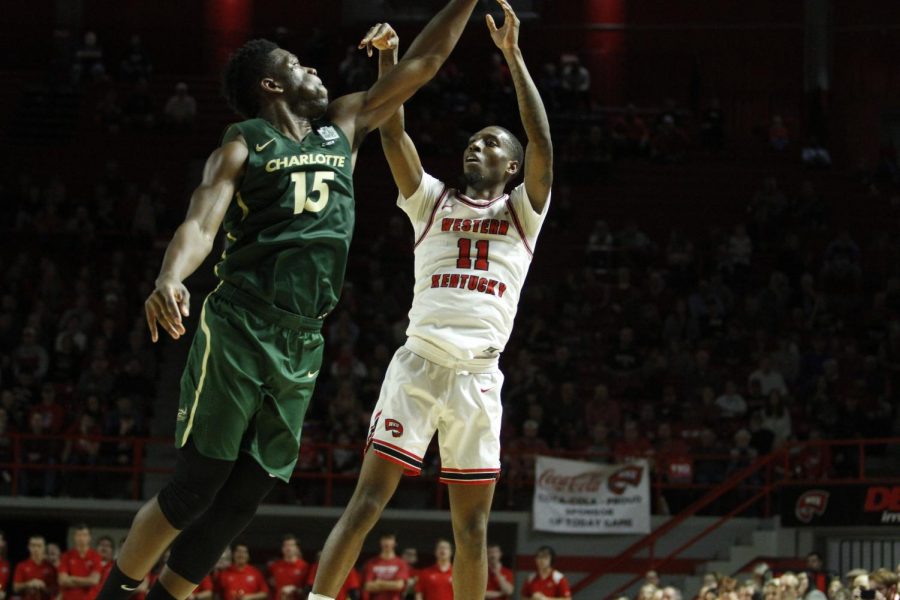 Junior guard Taveion Hollingsworth (11) pull up to shoot over Charlotte graduate forward Amidou Bamba (15) during the WKU Hilltoppers' 80-63 win over the Charlotte 49ers on Saturday, Jan. 18, 2020 in Diddle Arena.

The WKU men’s basketball team (12-6, 5-1 C-USA) picked up its second Conference USA win of the weekend on Saturday evening, as the Hilltoppers used a dominant second half to deliver Charlotte (10-6, 4-1 C-USA) its first league loss in a 80-63 blowout win in Diddle Arena.

Taveion Hollingsworth carried the Hilltoppers to a 71-69 win over Old Dominion on Thursday night by scoring nine points in the final 38 seconds, and the junior guard continued his offensive dominance against the 49ers by matching his previous career-high with 30 points.

Hollingsworth finished the game shooting a perfect 13 for 13 from the free-throw line, contributing to the 27 for 31 mark the Hilltoppers posted as a team from the stripe.

“Coach always tells us that you’ve got to be aggressive,” Hollingsworth said. “Everybody on the team, we can’t make every shot. Most of the time you want to get fouled and shoot free throws.”

Hollingsworth finished the weekend averaging 26.5 points per game while shooting an astonishing 21-of-21 from the free-throw line across two WKU wins.

Charlotte was sitting at first place in the league with an undefeated mark in C-USA play, and the 49ers had won seven of their last eight overall.

Coming into the contest, Charlotte ranked 33rd in the nation in scoring defense, limiting their opponents to 61.5 points per game. But the Hilltoppers became just the third team during the 2019-20 season to score 80 or more points on the 49ers.

Head coach Rick Stansbury said his team had too many self-inflicted turnovers in the first half, but he thought his team played better in the second period.

“You know, Charlotte has a really good basketball team,” Stansbury said. “It’s very obvious why they were 4-0 coming in here. They’re really, really good defensively. They give you nothing at the basket, they help off shooters, they’re going to make you shoot jumpers and shoot threes.”

“You know, the three-point line isn’t always our strength,” Stansbury continued. “But our guys found a way, especially in the second half.”

Although Charlotte doesn’t give up a lot of points at the basket, WKU forced its way into the paint and scored 13 layups.

The Hilltoppers finished the game with 30 points inside the paint, and WKU also outrebounded the 49ers 33-27, as seven different Hilltoppers grabbed three or more rebounds.

Redshirt junior Carson Williams became the third Hilltopper this season to join the 1,000-point club, finishing with 15 points on 5-of-6 shooting from the floor.

“That’s a really good feeling,” Williams said. “But honestly, I’m not as much focused on that as I am the big win we just got. That’s what I’m most happy about right now.”

Junior guard Josh Anderson had a quiet night after being hampered by foul trouble, finishing with five points, two assists and two steals in 21:38 of playing time.

Justice was sidelined for back-to-back games, missing WKU’s road win against Middle Tennessee State on Jan. 11 and its home win over Old Dominion on Thursday, but the IUPUI transfer made his return to the hardwood against the 49ers.

“Having Cam for 20 minutes, forget looking at his stats, I can promise the 20 minutes he gave us was huge,” Stansbury said. “His presence on the court spreads the floor, allows a few more things to happen off that dribble getting to the rim and his cerebralness out there. He does a lot of things that doesn’t show on that stat sheet, so those 20 minutes he gave us tonight was huge.”

The 49ers forced the Hilltoppers into 18 turnovers, their most turnovers in a C-USA game this season and their most since an 86-82 overtime loss to Rhode Island on Dec. 21, 2019.

Both teams played 10 or more players in Saturday’s contest, but Charlotte’s bench players scored 16 points compared to only seven points from the WKU bench.

Freshman guard Jahmir Young led the 49ers with 14 points, four rebounds, one assist and two steals in 28:13 on the floor.

Senior forward Amidou Bamba, who finished with eight total points, used his size advantage to win the opening tipoff against the shorter Williams.

Although the 49ers were unable to execute on their first possession of the game, Charlotte scored on its second possession when Shepherd drove into the painted area and scored a right-handed layup.

The Hilltoppers didn’t score put their first points on the scoreboard until Savage made a layup inside the paint at the 17:01 mark.

The 49ers turned WKU over three times in the first 3:41, helping Charlotte to take an early 9-2 advantage and causing Stansbury to call a full timeout to regroup his team.

After the timeout call, the Hilltoppers turned the ball over for the fourth time in the game when Young stole the ball out of Williams’ hands.

Savage gave the Hilltoppers a much-needed three points from the free-throw line, as he cut the Charlotte lead to 9-5 at the 15:30 mark.

Savage’s made free throws allowed the Hilltoppers to set up into its full-court press, the same defensive style WKU used in its comeback victory against ODU.

WKU’s full-court press turned the 49ers over, which led to Anderson getting fouled on the other end and netting 1-of-2 free throw shots.

The Hilltoppers were able to produce a quick 7-0 run when Williams knocked down a 3-pointer to tie the game at 9-9.

Charlotte answered by scoring six straight points at the 12:37 mark and taking a 15-9 lead, but freshman forward Isaiah Cozart ended the 49er run by scoring his first points of the game at the 12:11 mark.

Justice checked into the game for the first time at the 11:39 mark, and he promptly turned the ball over four times in his first four minutes of action.

WKU cut the Charlotte lead to 20-15 after Hollingsworth scored four straight points, but Edwards converted a 3-pointer to boost the 49ers to a 23-15 lead at the 7:02 mark.

Hollingsworth scored again, and redshirt freshman guard Jeremiah Gambrell drained a huge 3-pointer in front of Charlotte’s bench to bring the Hilltoppers to within five of the 49ers.

The Hillltoppers cut the Charlotte advantage to 27-24 when Anderson scored a fastbreak bucket at the 5:41 mark, but the 49ers pushed their lead to 30-24 when Shepherd drained a 3-pointer at the 4:45 mark.

Edwards picked up Charlotte’s fifth offensive rebound of the half, and the 6-foot-4-inch guard was able to score a layup at the 3:51 mark to give the 49ers a 34-26 lead.

Hollingsworth cut into the Charlotte lead by knocking down both of his shots from the free-throw line to make the score 34-28 with just 2:54 remaining in the half.

The Hilltoppers trimmed the 49er lead to 34-30 after Savage also made a pair of free throws at the 2:37 mark.

Justice scored his first basket of the night when he drove in and finished with his left hand to bring the Hilltoppers within two points.

But Martin completed a three-point play for the 49ers lead to push their lead back to 37-32 with 1:45 remaining in the half.

Hollingsworth swished a mid-range jumper with 14 seconds left in the half and then scored a layup as the halftime buzzer sounded, cutting the Charlotte lead to 39-38 at intermission.

The Lexington native was the only player in the first half to reach double figures, posting 14 points. Hollingsworth made six shots from the free-throw line and corralled five rebounds.

Savage was close to reaching double figures, but he finished the half with nine points, three rebounds and three blocks in 16:35 of action.

The Hilltoppers never led in the first half, but WKU erased a nine-point deficit by shooting 47.8% from the floor in the opening half compared to Charlotte’s similar 47.1% mark from the field.

Both teams each finished the first half of play with seven points coming from the bench.

WKU took its first lead of the game on the opening possession of the second half, as Anderson found Hollingsworth for a wide open 3-pointer.

Shepherd reached double figures on the first 49er possession of the half, and he equaled WKU at 41-41 at the 19:12 mark.

Williams completed an old-fashioned three-point play and Anderson scored a basket in transition to push the WKU lead to 46-41 at the 18:34 mark, which caused Charlotte head coach Ron Sanchez to call a full timeout.

The Hilltoppers stretched their lead out to 49-43 after Rawls made his first bucket of the night on a 3-pointer.

WKU scored on its first four possessions, outscoring the 49ers 11-4, but the Hilltoppers missed their first shot of the half at the 16:45 mark when Williams missed a heavily contested shot.

Anderson picked up his fourth personal foul at the 16:05 mark, forcing Stansbury to sit the 6-foot-6-inch guard until he checked in again with only 3:46 left of the game clock.

The 49ers evened the score at 49-49 when freshman guard Brice Williams, who finished with nine total points, knocked down a jumper at the 15:09 mark.

WKU regained the lead at the 14:14 mark after the Hilltoppers went over three minutes without scoring the basketball. Hollingsworth swished in his 19th point to end the scoreless streak, giving the Hilltoppers a 51-49 lead.

With WKU holding a nine-point advantage, Charlotte drained a much-needed 3-pointer at the 12:33 mark to cut the Hilltopper lead to 59-53.

Williams attacked the glass once more for the Hilltoppers, and he completed another three-point play to give WKU a 63-55 advantage at the 9:50 mark.

Hollingsworth stayed aggressive from the floor, as the 6-foot-2-inch guard found his way back to free-throw line at the 8:59 mark. He stayed perfect from the line, hitting all three foul shots.

The Hilltoppers pushed their lead to double figures for the time of the game when Savage banked in a 3-pointer in front of the WKU bench at the 7:31 mark.

Hollingsworth drove the lane on the next possession and scored his easiest bucket of the game, increasing the WKU lead to 71-57 at the 7:12 mark.

Savage drained another 3-pointer just 56 seconds later to help the Hilltoppers mount an 11-0 run and take a commanding 74-57 lead with 6:27 left in the contest.

Bamba ended WKU’s explosive run by getting fouled and making both of his shots from the free-throw line, cutting the Hilltopper lead to 74-59 at the 6:04 mark.

The Hilltoppers held a decisive 19-point advantage with 2:16 left in the game, which allowed senior forward Matt Horton and redshirt junior guard Patrick Murphy to check in for a few minutes once the game was completely out of reach.

WKU handed the 49ers their first loss in C-USA play, sending Charlotte home with a 17-point loss thanks to a raucous 4,677-person crowd in Diddle Arena

Following the win, the Hilltoppers will square off with archrival Marshall (8-10, 2-3 C-USA) in a unique two-game set next week.

“We know it’s never easy going on the road in this league,” Stansbury said. “Marshall’s got a really good basketball team, so it’ll be a really difficult challenge for us up there Wednesday.”

WKU will first travel to Huntington, West Virginia, for a Wednesday evening contest before welcoming the Thundering Herd to Bowling Green next Saturday night