Sports, politics and art: What to expect going into 2020 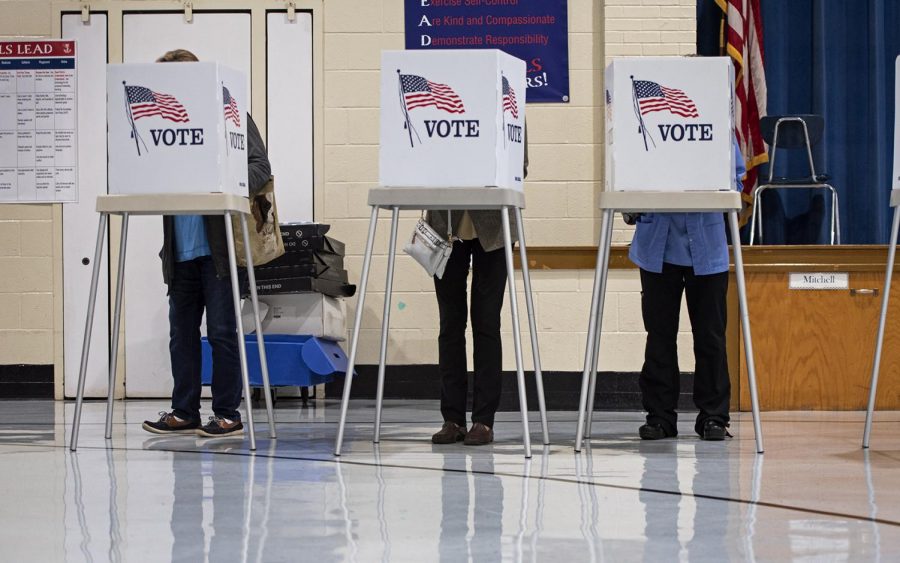 Voters at the McNeill Elementary polling location complete their ballots for the 2019 Kentucky general elections on Nov. 5, 2019. The 2019 Kentucky governor's race has generated national attention with the incumbent Matt Bevin's affiliation with President Trump.

With the 2010s wrapped up, it’s time to turn attention towards the sports, politics and art expected to define 2020 and impact the future for generations to come.

The 2020 Presidential election will undoubtedly serve as a point of both contention and pride for Republicans and Democrats no matter the outcome. As it stands, it remains to be seen who will receive the Democratic nomination and challenge President Trump in November.

The Iowa Caucus will be the first primary election of the season and is set to be held on Feb. 3. The election acts as both an indicator and springboard for candidates running for party nominations. In the history of the United States, no candidate who has placed below third has gone on to win the nomination. Voters can expect to see candidates begin to drop out more frequently as the race narrows down to key performers such as Sen. Bernie Sanders, former Vice President Joe Biden, Mayor Pete Buttigieg and Sen. Elizabeth Warren.

According to averages gathered by Real Clear Politics, polling of Iowa voters has Sanders at 25%, Biden at 22%, Buttigieg at 17% and Warren at 13.5%. Gallup polls have revealed voters view issues surrounding healthcare, education, the economy and national security as major factors in their final decision.

Kentucky’s Democratic primary election is set to be held on May 19.

While Democrats continue to campaign, the Senate has begun to hear arguments for and against removing President Trump from office following his impeachment in the House.  Trump faces harsh allegations of abuse of powers by withholding military aid to Ukraine. Real Clear Politics reports 48.1% of Americans disapprove of removal from office while 47.5% show support. Regardless of public opinion, the Republican-controlled Senate is unlikely to remove Trump from the presidency in the following weeks.

The result of the trial will undoubtedly play a role in the 2020 election, although it is unclear whether the outcome will give Trump a boost in the polls, mobilize opposition voters or bar the president from office entirely.

At the state level, 86 of 99 legislative chambers will be holding elections this year, including the Kentucky Senate. 19 districts will hold elections for state senators, eight of which involve an incumbent candidate running unopposed. Presently, the Senate is comprised of 28 Republican and nine Democratic senators. Republicans are sure to maintain control of the chamber, posing a significant challenge to liberal policies supported by newly elected Democratic Gov. Andy Beshear.

State Senate elections will be held on Election Day, Nov. 3.

The United States and the world will be turning its attention to Tokyo as the Summer Olympics begin on July 24.

Absent from the competition will be Russia, who was banned from participating in all international sporting events for four years following allegations of widespread state-sponsored doping among athletes during the 2014 Sochi Winter Olympics. Russian athletes will still be permitted to compete under a neutral flag so long as they have not been shown to have used performance-enhancing drugs.

As of now, 41 Olympians have been chosen to represent Team USA in competition. Among notable U.S. competitors is 19-time gold medalist Simone Biles, the gymnast who made history in the 2016 games by receiving the most overall gold medals of any male or female Olympian in history at the age of 19.

2020 is expected to deliver incredible new music as artists spanning every genre prepare to release a plethora of new albums.

Rapper J. Cole is expected to release one of the most anticipated albums of the year, “The Fall Off,” but has yet to set a date. Drake and Future recently teased an upcoming collaboration that remains shrouded in secrecy, leaving fans unsure whether to expect a full-length LP, an EP or a single release. Hip hop group Migos and rapper Young Thug are both slated for early 2020 album releases, both having delayed albums originally slated for release in 2019.

Notable rock groups Tame Impala, The 1975, Green Day and The Killers all announced albums to be released in the coming year. Arguably the most monumental rock release will come from The Strokes, the indie rock icons that many credit with saving the American rock genre. Little is yet known about the project, including a name and release date. This will be their first LP release since their 2013 album, “Comedown Machine,” which received favorable reviews but failed to capture the massive appeal of earlier albums “Is This It,” “Room on Fire” and “First Impressions of Earth.”

Features reporter Michael J. Collins can be reached at 502-655-9925 and [email protected] Follow Michael on Twitter at @NotMichaelJColl.