WKU scores 61 points in 2nd half, blows past North Texas in C-USA opener 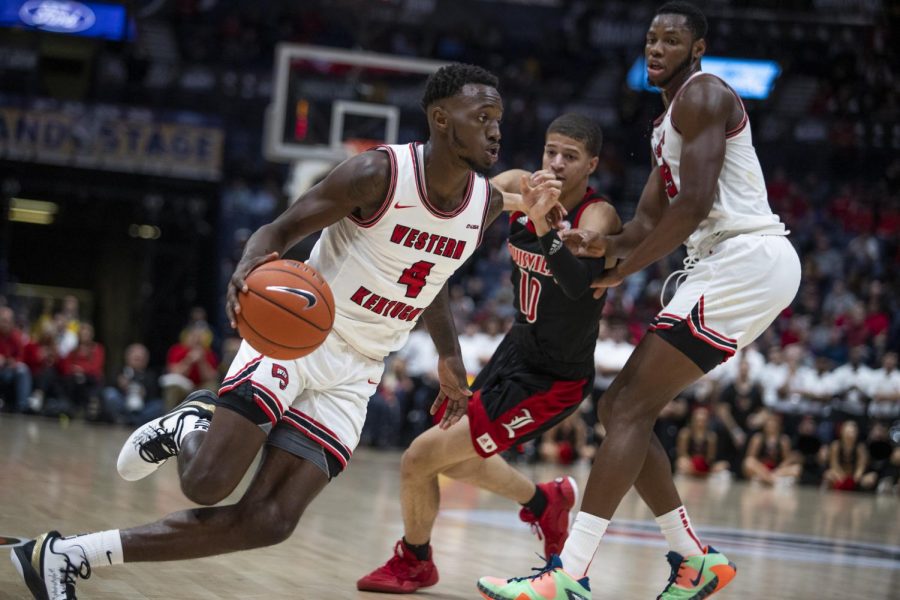 WKU guard Josh Anderson (4) drives to the lane after center Charles Bassey (23) sets a screen on Louisville guard Samuell Williamson (10). The Cardinals defeated the Hilltoppers 71-54 in Bridgestone Arena on Sunday, Nov. 17 2019, in Nashville.

The WKU men’s basketball team (8-5, 1-0 C-USA) mounted a furious comeback to claim its 11th straight win over North Texas (6-8, 0-1 C-USA) on Thursday night, and the Hilltoppers opened both Conference USA play and the 2020 calendar year with a much-needed 93-84 win in Diddle Arena.

WKU finished non-conference play with two straight losses against Rhode Island and Belmont following a season-ending injury to sophomore center Charles Bassey, and the Hilltoppers seemed close to dropping three straight after falling behind by 15 points in the second half.

But WKU didn’t give in, using identical 69.2% shooting marks from the floor and from beyond the arc to drop 61 points in the second half against an astonished Mean Green squad.

Head coach Rick Stansbury said he had never been a part of a game where a team committed zero turnovers in an entire half, adding that 17 assists and only 5 turnovers from his team was instrumental to the Hilltoppers’ furious second-half comeback.

“They had a 29-point turnaround in about 15 minutes against a really good team,” Stansbury said. “That’s kind of amazing. Those guys deserve all of the credit for those little adjustments they made and to go out in a game this time of the year, in conference play.”

“It’s not like we’re out here playing exhibition games trying to learn some things and adjust,” Stansbury continued. “We’re doing it against a really good team in conference play, and that’s not easily done. So, those guys deserve all the credit for making those adjustments and doing some things.”

UNT had one of the nation’s top defenses coming into Thursday’s game, holding opponents to just 61.4 points and ranking 37th nationally in that category, but the Hilltoppers put a blemish on those sterling numbers by posting 93 total points.

“North Texas was giving up 61 points for the game — we score 61 in the second half,” Stansbury said.

Freshman guard Jordan Rawls stepped up after junior guard Taveion Hollingsworth was sidelined seconds into the second half. The Chattanooga, Tennessee, native tallied 18 points, three assists and a rebound in 28:22 of playing time.

North Texas shot 58% overall compared to 55% from WKU. The Mean Green, which rank as one of the nation’s top 3-point shooting teams, outscored the Hilltoppers 42-26 inside the paint on a night where North Texas also netted 10 3-pointers.

“Again, they were very efficient,” Stansbury said. “We have to get better at not letting them drive that ball to the basket. If you look at their stats, it’s not like they had a bad shooting game in the second half. They went 7 for 15 from the three-point line themselves in the second half.”

Redshirt junior guard Javion Hamlet had a team-high 19 points, as he shot 7-of-13 from the floor in 35:46. Redshirt senior forward Deng Geu added 16 points in the first half, going 7-of-7 from the floor during that time. Geu finished with 18 total points in 21:43.

North Texas won the opening tip, but the Mean Green didn’t score until their second possession of the game. Redshirt sophomore Umoja Gibson drove inside the lane on that possession, finding Geu for an easy dunk just 44 seconds into the contest.

Geu scored again to stay perfect from the field soon after, muscling his way into the paint for an aggressive finish to recapture the lead for North Texas.

After Geu scored the opening six points for the Mean Green, junior forward Zachary Simmons scored his first points of the night to give North Texas an 8-6 lead at the 6:15 mark.

On the other side, Justice scored six points on two baskets and Williams knocked down a 3-pointer to keep the Hilltopper offense rolling.

The Mean Green opened a 12-9 lead to start the game at the 13:59 mark, and all of North Texas’ first 12 points came inside the painted area.

After trailing by three points for just under a minute, Rawls scored his first points of the night and Hollingsworth converted two shots from the charity stripe to grant WKU a 13-12 lead at the 13:04 mark.

But Geu answered by going on a personal 6-0 run for North Texas, using his matchup with senior forward Matt Horton to his advantage. The 6-foot-8-inch forward netted a pair of free throws and two ferocious dunks, giving the Mean Green an 18-13 lead at the 11:28 mark.

“Matt has to be better coming off that bench in that stretch,” Stansbury said postgame. “He has to be better, and we need Matt to help us. I don’t have no charts in front of me, but there was about six or eight in a row came out of that stretch with Matt there.”

North Texas used Geu’s early scoring dominance as motivation, and the Mean Green took a 23-15 advantage when Hamlet attacked the paint for two points at the 10:04 mark.

The Mean Green stretched their lead to double digits for the first time of the night just before Hamlet nailed another jumper with 8:07 remaining in the first half, giving North Texas a 28-15 lead and capping a personal 7-0 run at that point.

Savage released his first shot of the game at the 7:05 minute mark, and the Bowling Green native knocked down a 3-pointer to cut the Mean Green lead to 30-21.

After trailing by as many as 13 points in the first half, WKU used its 2-3 defense zone to turn the North Texas offense over late in the frame.

Hollingsworth found Savage for an emphatic alley-oop on a fast break, causing North Texas head coach Grant McCasland to ask for a 30-second timeout after WKU cut the Mean Green lead to 30-24 with 5:49 remaining in the half.

Junior guard Thomas Bell answered, draining a 3-pointer in the left-side corner to increase the Mean Green lead to 33-24 at the 4:30 mark.

The Mean Green continued to push their lead to double digits, taking advantage of a struggling Hilltopper offense that didn’t log a made field goal in the final 3:41 of the opening half.

Hollingsworth drew a foul in the lane just before the halftime buzzer, and WKU used his two made free throws with 00.3 remaining to trail North Texas 42-32 at halftime.

In the first half, Geu led all scorers with 16 points and shot a perfect 7-of-7 from the floor. The Sioux Falls, South Dakota, native came into the contest only averaging 7.8 points per game.

Geu set the tone for the Mean Green, but his teammates stepped up and produced 42 points from the floor in the first half on 60.7% shooting from the field.

Bell gave North Texas a boost off the bench, as he scored eight points and recorded a game-high rebounds in 13:58 of playing time in the first half.

Much like WKU’s non-conference finale against Belmont, the Hilltoppers dug themselves into a hole early in the first half. WKU shot 40% from the floor, but the Hilltoppers couldn’t stop the Mean Green from outscoring them 26-10 in the paint.

Hollingsworth shot just 1-of-4 from the field in the first half, but the Lexington native led the Hilltoppers with seven points on a perfect 5-of-5 shooting from the free-throw line.

Williams opened the second half for the Hilltoppers by bolting into the lane and scoring a layup in the paint just nine seconds into the second period.

Shortly after, Hollingsworth collided with a North Texas defender while fighting for a loose ball and was forced to head to the locker room just 27 seconds into the second half.

With Hollingsworth absent, North Texas built a 7-0 run and jumped out to its largest lead of the game at the time, a 49-34 advantage over WKU at the 18:18 mark.

WKU answered North Texas’ 7-0 run by going on one of its own, and the Hilltoppers scored seven points in 46 seconds to only trail 49-41 with 17:01 left to play.

Hollingsworth returned to the WKU bench after North Texas called a timeout, but he didn’t check back into the game after his apparent injury.

The Hilltoppers kept pushing, and Justice knocked down his second straight 3-pointer to give WKU life and cut the Mean Green lead to 49-44 at the 16:18 mark.

Williams brought Hilltopper fans to their feet just 39 seconds later, as he was fouled on his way to the basket and converted a three-point play to only trail North Texas 49-47 at the 15:39 mark.

Rawls drained a 3-pointer on the next WKU possession after a crisp chest-pass from Savage, capping off a 16-0 scoring run that gave the Hilltoppers their first lead of the half at 50-49.

Redshirt senior guard DJ Draper answered with a 3-pointer of his own, giving the Mean Green a narrow 52-50 lead at the 14:26 mark.

A layup by Williams, a three-point play by Justice and a 3-pointer from Savage gave WKU its largest lead of the game at that point, a 58-52 advantage at the 13:14 mark.

The Hilltoppers continued to provide Hilltopper fans with an offensive display, as WKU scored on nine straight possessions early before the second media timeout at the 11:59 mark.

Just eight minutes into the second half, WKU had outscored the Mean Green 29-15 and made all five of its shots from beyond the arc.

WKU used another pair of 3-pointers from Anderson and Savage to take a commanding 69-57 lead over North Texas at the 10:10 mark.

The Hilltoppers held Geu scoreless in the second half until the 9:53 mark, but junior guard James Reese found the big man in the paint for an easy layup at that point.

North Texas scored at the 8:44 mark to cut WKU’s lead 71-61, but the largest round of applause  from Diddle Arena faithful on the night came just six seconds later,

Rawls threw a bullet to Anderson just above the mid-court logo, and the Baton Rouge, Louisiana, native drove inside and rocked the rim with a ferocious slam dunk.

The Mean Green cut the WKU lead to single digits after Hamlet drained a 3-pointer from the left side of the court, but Williams found his way into the paint on the Hilltoppers’ next possession to extend the WKU lead to 77-66 with 6:45 remaining in the game.

After getting a stop on the other end, Rawls drained his third 3-pointer of the half to give the Hilltoppers a demanding 80-66 lead. The shot caused McCasland to call a timeout to regroup his squad with 5:58 left to play in the contest.

WKU carried an 83-71 lead over the Mean Green after Williams went 1 for 2 from the free-throw line, but North Texas wouldn’t go down without a fight — Reese drilled a 3-pointer to cut the WKU lead to 83-74 with 4:16 remaining in the contest.

Gibson came into the contest making a 3-pointer in 18 straight games, and while the North Texas guard didn’t score from behind the line until the 3:45 mark, his first of the game make cut the WKU lead to 85-77.

WKU reached the 90-point mark for the third time this season when Anderson converted both of his free throws to give the Hilltoppers a 10-point cushion with 2:32 remaining in the game.

The Hilltoppers didn’t register a single field goal in the last 3:23 of clock time, but Rawls and Anderson combined for three free throws to help WKU log a nine-point decision.

Tipoff in Diddle Arena is set for 4 p.m. on Saturday. The game will be broadcast on Hilltopper Sports Satellite Network and ESPN3.