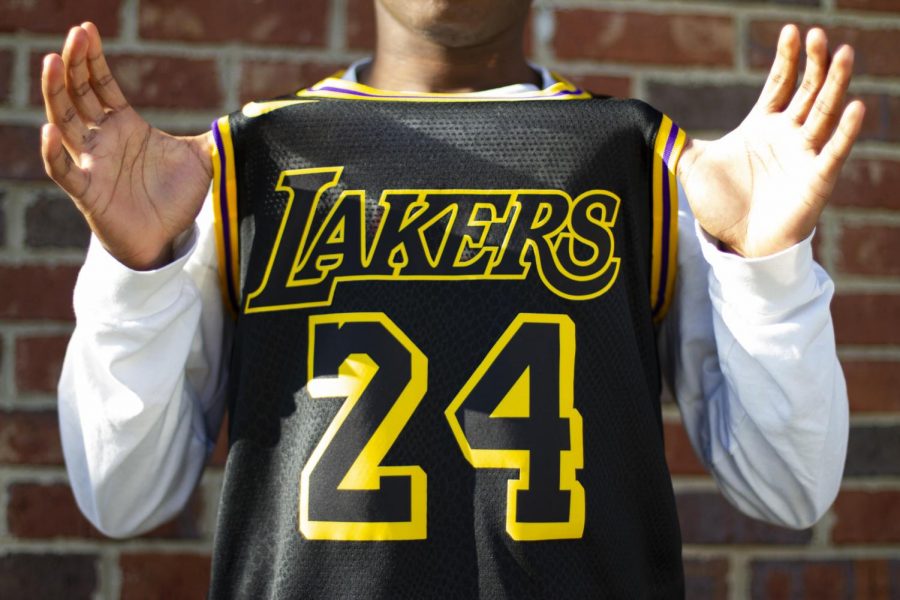 A WKU student poses with a Kobe Bryant jersey the day after his passing on Monday, Jan. 27, 2020.

I vividly remember watching the 2009 and 2010 NBA Finals when I was in middle school. The Los Angeles Lakers dominated their opponents, the Orlando Magic and Boston Celtics, respectively, but no player was as breathtaking to watch as No. 24, Kobe Bryant, who cemented his legend in those years.

Kobe died Sunday in a helicopter crash at the age of 41. He leaves behind one of the greatest legacies in NBA history, a wife and family and five championship banners hanging in the rafters of the Staples Center.

So what makes mourning him so complicated? For many, it’s difficult to get past the 2003 accusation that he raped a 19-year-old woman in a hotel in Colorado. I believe the allegations, which is why I was surprised at how visceral my devastation was over the news of his death. A feeling in the pit of my stomach that I’d never felt before overtook me as I scrolled through Twitter, until it literally broke, locked in a moment that I and many others of a certain age will almost certainly look back on as a touchstone moment of sorrow as we reach adulthood.

Here’s the thing: people are complicated. Legacies are messy. The dead aren’t here to defend themselves. Even knowing what he may have done, the lasting impression of Kobe is, and I think should be, as a phenomenal basketball player the likes of which my generation, which never saw Michael Jordan playing for anyone other than the Wizards, has only seen one other time, in LeBron James. Kobe was the icon of our childhood. We bought his jerseys, cut his posters and sports cards out of Sports Illustrated for Kids and yelled “Kobe!” every time we threw a Gatorade bottle towards a trash can.

But why is that? I think that societies need heroes. Every civilization has had them, from Samson to Achilles to Muhammad Ali. All of those heroes are flawed in some way, from Samson’s loss of his hair to Ali’s final fights in the 1980s, but many of them were granted their shot at redemption as well. Samson destroyed the Philistines, Ali, shaking with illness, beat the odds to light the Olympic torch in Atlanta in 1996.

Kobe’s public redemption was on the basketball court, winning championships, and off, coaching girls basketball, supporting Make-A-Wish and giving scholarships to young people to broaden their cultural horizons. If there was any justice in the world, he would have had the opportunity to continue to better himself, giving his Hall of Fame speech, seeing his daughters graduate and aging into the kind of ex-player who serves as a spokesman for the league and the sport.

But he doesn’t. He’s just gone. And it’s absolutely crushing that it ended like this.

Sports culture is often criticized for being much ado about nothing, insignificant in the grand scheme of life and unimportant compared to the rest of the news cycle. I’ll contest that line of thinking until I run out of air in my lungs. Sports brings people together in a way that nothing else, with the possible exception of music and art, has ever been able to do.

Kobe Bryant on the court exemplified that better than anyone. His drive to succeed inspired a generation to take to their driveways and playgrounds to copy his moves in hope of one day being an eighth of the player he was.

After he retired, he became more than a basketball player. He spent time with his four daughters, including 13-year-old Gianna, who was also killed in the crash, and became a fierce advocate for women’s basketball.

Former WNBA superstar Rebecca Lobo tweeted about him on Sunday.

“No @NBA player supported the @WNBA or women’s college basketball more than Kobe,” Lobo wrote. “He attended games, watched on tv, coached the next generation. We pray for his family.”

Kobe was complicated, and whether he should be forgiven for what might have happened in Colorado is not up for me or you to decide. A man, a father and a husband are all dead, and that, regardless of complications, makes this a time to grieve, a time to contemplate the fragility of life. Jay Williams put it best during his ESPN appearance on Sunday, encouraging viewers to forget petty arguments they might have with their loved ones.

“None of that stuff matters, man,” Williams said. “This is about life and being precious with every damn second we have here because from somebody who knows — it almost happened to me — like that, man. It’s just over. Done, randomly. Randomly, arbitrarily. His four girls and his wife, we need to come around them and support them and help them.”