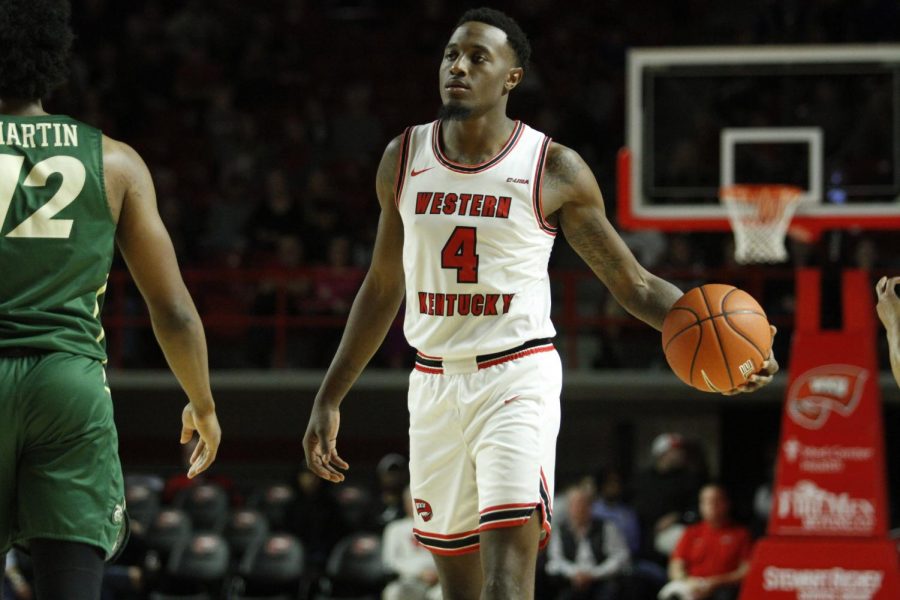 Junior guard Josh Anderson (4) brings the ball up the floor during the WKU Hilltoppers' 80-63 win over the Charlotte 49ers on Saturday, Jan. 18, 2020 in Diddle Arena.

The WKU men’s basketball team (14-7, 7-2 C-USA) suffered its second loss in Conference USA play on Thursday night, as the Hilltoppers blew a 12-point in the first half against Florida Atlantic (13-9, 5-4 C-USA) in a crushing 69-65 road loss in RoofClaim.com Arena in Boca Raton, Florida.

The Hilltoppers have made a name for themselves in C-USA play this season by winning three games after trailing by double digits, but the Owls were the Comeback Kids against WKU.

FAU started the game down 12-0, but FAU head coach Dusty May led his team back into the game and helped his players snap their three-game losing streak.

WKU came into the contest looking to pick up their fourth road win of the season, but WKU instead fell to 3-4 on the road during the 2019-20 season.

“Again, it’s more difficult on the road,” head coach Rick Stansbury said. “At home, your margin for error is a little greater just because you can get some emotion from your building, being at home. On the road, it’s hard to get that and that’s when that margin of error gets thin.”

The Hilltoppers turned FAU over 15 times on Thursday, which led to WKU scoring 20 points off turnovers. WKU only turned the ball over nine time against the Owls.

Only the starting five scored for WKU against the Owls, as the Hilltoppers’ bench players failed to record a single point across 40 minutes of game action.

Junior guard Josh Anderson led the Hilltoppers with a season-high 20 points on 7-of-13 shooting from the floor in 30 minutes of action. Junior guard Taveion Hollingsworth added 18 points, four rebounds and three assists across 38 minutes.

Redshirt senior wing Jared Savage recorded a double-double by scoring 13 points and 12 rebounds. Freshman guard Jordan Rawls scored all of his eight points in the first 6:29 of clock time during the game.

“I mean, a little bit but just as players, we know we have to fight through that,” Anderson said. “But FAU, they did a good job. They had some guys come off the bench and make some good shots and that was big for them.”

FAU was outrebounded 19-16 in the first half, but the second half was much different, as the Owls ended the game outrebounding the Hilltoppers 40-32. The Owls moved the ball around at a consistent pace, assisting on 15 baskets compared to WKU only notching seven assists.

Silins won the opening tip for the Owls, but the Hilltoppers were the first score after Rawls knocked down a 3-pointer to give WKU an early lead at the 19:19 mark.

Hollingsworth scored his first points of the game at the 18:31 mark, and then Rawls drained his second consecutive 3-pointer to expand the Hilltopper lead to 8-0 at the 18:13 mark, causing May to ask for a 30-second timeout.

Anderson rocked the rim on back-to-back possessions, helping the Hilltoppers to jump out to a 12-0 advantage at the 16:20 mark.

FAU started the game by missing its first four shots from the floor, but the Owls ended WKU’s early 12-0 run when Taylor knocked down his first 3-pointer of the night at the 16:06 mark.

WKU carried a 14-5 lead into the first media timeout at the 14:16 mark, but Taylor nailed his second triple of the night directly after the timeout to bring the Owls within six points of the Hilltoppers.

Rawls hit the first two 3-pointers for WKU early on, but Savage knocked down WKU’s third 3-pointer at the 13:31 mark and pushed the Hilltopper lead to 17-8.

The Hilltoppers made it to the free-throw line for the first time of the game at 11:45 mark when Anderson was fouled on his way to the basket. The Baton Rouge, Louisiana, native converted 1-of-2 of his shots from the foul line.

WKU scored again on its next possession when Hollingsworth scored his second basket of the game to give the Hilltoppers a 20-11 lead at the 11:17 mark.

FAU responded by hitting back-to-back 3-pointers in a matter off 33 seconds, cutting the Hilltopper lead to just 20-17.

The Owls sliced the Hilltopper lead to just two points after Sebree made 1-of-2 shots from the charity stripe, but Hollingsworth scored again and increased the WKU lead to 22-18 at the 9:46 mark.

The Hilltoppers went on a quick 6-0 run after Hollingsworth knocked down a mid-range jumper at the 8:09 mark, resulting in a 26-18 lead for WKU.

WKU then went on a scoring drought that lasted over three minutes of clock time, allowing FAU to tie the game for first time since the score was 0-0.

FAU went on a lethal 10-0 run and took over the lead for the first time of the game at the 4:56 mark, 28-26. But the Hilltoppers scored four straight points, recovering their lead at 30-28 after trailing for 14 seconds.

WKU first reached the free-throw line at the 11:45 mark, but the Hilltoppers didn’t reach the charity stripe again until the 2:18 mark after Savage was fouled on a 3-pointer attempt.

The Bowling Green native converted all three of his shots from the line, expanding the Hilltopper lead to 33-28.

After hitting the ground running with a 10-0 run, the Owls went 3:51 minutes without a point until Forrest scored at the 1:05 mark to cut the Hilltopper lead to 33-30.

Forrest looked to score a left-handed layup with 5.7 seconds left in the half, but Savage denied the sophomore guard and allowed the Hilltoppers to head into halftime with a 33-30 lead.

The Hilltoppers started the game on a scorching 12-0 run, but FAU slowed WKU into shooting just 44.8% from the floor in the opening half of play.

Rawls had the hot hand early, scoring eight points in the first 6:29 of play, but he went the remainder of the half without a point.

Savage also added eight points along with seven rebounds in 17 minutes of action. All five starters scored in the first half, but Hollingsworth led the pack with 10 points on 5-of-8 shooting from the floor.

Anderson had a pair of dunks and a made free throw in the first half, but he was forced to sit the remainder of the half after picking up his second personal foul at the 7:49 mark.

The undersized Hilltoppers ended the half with 19 rebounds, compared to the Owls only picking up 16. WKU tied the Owls with points in the paint, but the Hilltoppers were outscored in bench points, 6-0..

Hollingsworth missed his first shot of the second half, but Rawls picked up an offensive rebound and dished out a pass to Savage for a 3-pointer. Savage knocked down his shot, which gave the Hilltoppers a 36-30 lead just 24 seconds in the half.

Anderson recorded his third dunk of the night at the 17:46 mark, as Hollingsworth found the 6-foot-6-inch guard running from the right side of the court to give WKU a 40-34 advantage.

FAU junior guard Richardson Maitre went scoreless in the first half, but he drained a 3-pointer at the 17:04 mark to cut the Hilltopper lead to 40-37.

Maitre scored again on a right-handed layup at the 15:55 mark, trimming the Hilltopper lead to just a 42-41 lead at that point.

The Owls took their second lead of the ball game at the 14:26 mark when Ingram got in the lane and scored a layup to give FAU a 43-42 advantage.

The Hilltoppers regained the lead at the 13:58 mark when Anderson found his way back to the free-throw line, where he converted both of his shots.

FAU scored five straight points and recaptured the lead, making the score 48-44 at the 13:03 mark. But the Hilltoppers quickly scored four straight and knotted the score at 48-48 with 12:04 remaining in the contest.

Sebree knocked down his third 3-pointer of the night at the 11:51 mark, staying perfect from the floor and giving FAU a 51-48 lead.

After Sebree’s made 3-pointer, the Owls went 3:01 of clock time without a point, which allowed the Hilltoppers to regain a 52-51 lead at the 9:07 mark.

Forrest ended FAU’s scoreless streak with a 3-pointer in the right-side corner, retaking a 54-52 lead at the 8:14 mark.

The Owls matched their largest lead of four points at the 6:49 mark when Silins scored a layup in the paint.

Anderson scored a tip-in basket at the 6:13 mark, bringing the Hilltoppers back within two points. Hollingsworth then took an FAU defender off the dribble to tie the score at 58-58 with 5:19 left in the game.

FAU regained the lead after senior center Aleksandar Zecevic finished a shot in the paint at the 4:15 mark, but Savage scored on the other end to knot the score at 60-60 with 3:54 left in the contest.

Ingram scored five straight points for the Owls, allowing FAU to build a 65-60 lead with 2:58 left to play in the contest.

Anderson scored his 20th point of the night by converting a three-point play and bringing the Hilltoppers within two points at the 2:02 mark.

Stansbury called a full timeout with 1:05 left in the game, as the Hilltoppers were down 65-63.

On the first WKU possession after the timeout, Hollingsworth found Williams inside the paint. He was fouled and made two free throws to tie the game at 65-65 with 45 seconds left in the game.

The Hilltoppers gave up a crucial offensive rebound with just over 20 seconds left in the game, as Ingram snagged a rebound and scored a layup to give the Owls a 67-65 lead.

WKU was looking to tie the game late in the contest, but the Hilltoppers came up empty on their ensuing possession. FAU regained the ball with 6.7 seconds left and moved the ball up to midcourt with 3.8 seconds left by calling a timeout.

The Hilltoppers were forced to foul FAU with 2.2 remaining, sending Maitre to the free-throw line, where he converted both of his free throws and delivered WKU a four-point road loss.

Following the loss, the Hilltoppers will travel to Miami before continuing C-USA play against Florida International (14-8, 5-4 C-USA) this weekend.

The Panthers have been a completely different team when playing at home this season, posting a 9-1 mark in Miami compared to a 5-7 combined record in away games and neutral-site meetings during the 2019-20 campaign.

Tipoff in the Ocean Bank Convocation Center is set for 11 a.m. on Feb. 1, according to the FIU Athletics website.