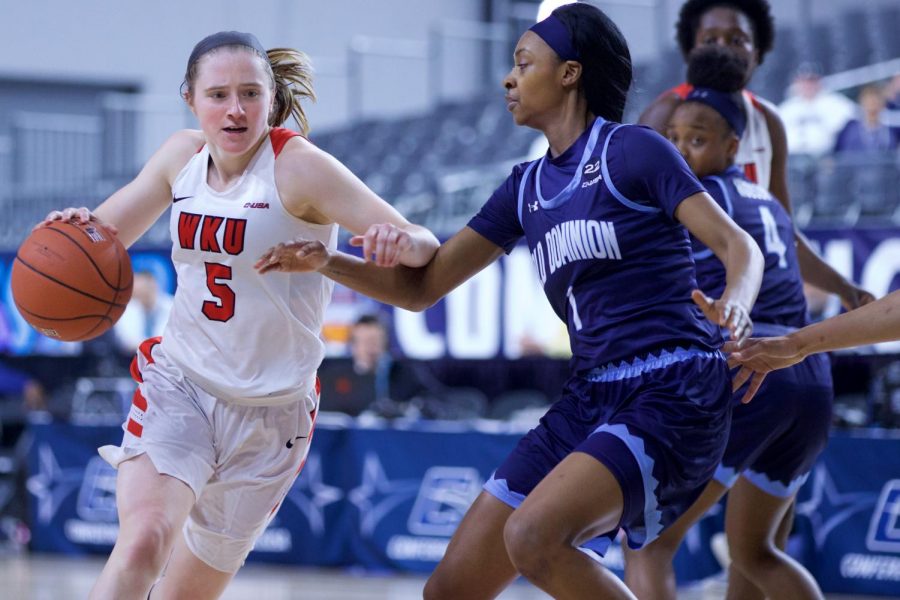 Junior guard Whitney Creech drives the lane during the Lady Toppers' 74-60 win over Old Dominion in the quarterfinals of the Conference USA tournament in Frisco, Texas.

The WKU women’s basketball team (10-6, 2-3 C-USA) resumed its trek through Conference USA play on Thursday night, and the Lady Toppers stumbled against Old Dominion (13-3, 3-1 C-USA) in a 76-65 road loss in Chartway Arena in Norfolk, Virginia.

The Lady Monarchs snapped an 11-game losing streak against the Lady Toppers en route to the program’s first victory over WKU since the 1989-90 season.

ODU also showcased why it is considered the best defensive team in C-USA, as the Lady Monarchs shut down the second-best offensive team in the conference and held WKU to a scoring output well below its average points per game total this season.

WKU shot 41% from the field, 25% from beyond the arc and 55% from the free-throw line. The Lady Toppers were outrebounded 42-34 by ODU, and WKU was also held to low shooting percentages throughout the game.

Junior forward Raneem Elgedawy proved to be the biggest bright spot in the loss for the Lady Toppers, as she tallied 14 points on eight shots and snagged seven rebounds while converting only four of her 10 attempts from the foul line, which proved costly late.

ODU shot 48% from the field, 38% from deep and 58% from the charity stripe. The Lady Monarchs kept WKU at bay offensively, outscoring the Lady Toppers in three of the four quarters to secure a hard-fought victory.

Sophomore wing Ajah Wayne torched WKU all night long, as she scored 23 points on 9-of-12 shooting and added another 10 rebounds in her 35 minutes of action.

Junior guard Victoria Morris dropped in 19 points of her own, and senior guard Taylor Edwards scored 12 and dished five assists in 28 minutes.

Junior forward Dejah Carter had an efficient night from the field as well, as she scored 10 points on 5-of-6 shooting in only 15 minutes of play.

Elgedawy scored the first points of the game for the Lady Toppers and continued to dominate from there, dropping in six of the first nine WKU points on layups and free throws. Porter added a 3-pointer of her own during the first 4:05 of play.

The Lady Monarchs also relied on a primary scorer in the early going, as Edwards attacked the paint at will and tallied six points on layups. Her efforts allowed ODU to take a 10-9 lead with 5:55 left in the first quarter.

ODU continued its onslaught in the paint, scoring every field goal close to the basket or at the free-throw line.

The Lady Monarchs used their high-percentage opportunities to put together a 7-0 scoring run and extend their lead to 13-9 with 4:45 remaining in the quarter.

Givens responded with a short jumper and a deep 3-pointer to snatch a 14-13 lead back for the Lady Toppers with 3:46 left in the first period, but ODU answered back to finish the first 10 minutes of action.

Lady Monarch guards Morris and Amaya Register combined for eight points over the final 3:03 of the quarter. The duo’s scoring allowed ODU to go on an 8-2 scoring run and take a five-point lead into the second frame.

Wayne came out firing in the second quarter, knocking down a deep 3-pointer and a mid-range jumper to bring her point total to nine on 4-of-4 shooting.

Edwards then added yet another layup to her stat line which extended the ODU run to 7-2 in the second quarter. This run allowed the Lady Monarchs to swell their lead to 10 with 6:30 remaining in the half.

Creech stopped the bleeding momentarily with a layup at the 6:03 mark in the second, but the Lady Toppers could not mount any type of comeback due to their inability to score the basketball.

ODU ripped off a 9-0 run following the Creech bucket, blowing the game wide open. Their Lady Monarch lead grew to 17 with 3:39 left in the half, while WKU had no answer on either end of the floor.

Givens and Creech responded, combining for a short 5-0 run of their own. The Lady Toppers cut the Lady Monarch lead to 12 points with 2:02 left and forced an ODU timeout to stem the tide of the WKU offensive attack.

The Lady Monarchs recovered after the timeout, draining two more 3-pointers and extending the ODU lead to 15 going into the intermission.

Junior forward Fatou Pouye converted an and-one opportunity with 48 seconds left in the second, but offensive efforts such as this one were few and far between in the first half of play.

WKU struggled to score over the first two quarters, shooting 33% from the field and 16% from deep. In addition to the Lady Toppers’ offensive deficiencies, WKU was outrebounded 24-17 in the first half as well.

After trailing 43-28 at halftime, Givens and Creech took it upon themselves to provide more aggression and efficiency on the offensive end for the Lady Toppers, scoring 13 of the team’s first 15 points in the third quarter.

While they did provide a spark to a sputtering WKU offense, ODU was able to keep its lead at double digits until the 3:22 mark in the third frame.

Givens knocked down back-to-back shot jump shots to cut the Lady Monarch lead down to 10 with 3:39 left in the third.

Elgedawy then netted two free throws to get the deficit back to single digits for the first time since the 6:03 mark in the second quarter.

This small victory was short-lived for the Lady Toppers, as ODU went on a quick 4-0 run to grow its lead back to 12 with 2:03 left in the third.

Redshirt senior guard Alexis Brewer and Porter combined for a huge 7-0 run to end the quarter, stealing all the momentum back for WKU entering the decisive frame.

The Lady Monarch lead had dwindled to just five, and the Lady Toppers looked poised to make a run at stealing a win in a tough road matchup against its conference rival.

The final 10 minutes of the contest proved to be as intriguing as the opening 30, as both teams refused to give up any ground.

WKU matched ODU bucket-for-bucket for the first 2:44 of the fourth, but the Lady Monarchs put together a 9-2 run that seemed to put the Lady Toppers away for good.

The ODU lead swelled to 12 points with 3:27 remaining in the game, but WKU still showed its resolve to the very end.

Givens and Elgedawy combined for a 4-0 mini-run to shave the Lady Monarch lead to just eight with 1:56 remaining in the game, but ODU proved to be too much for the Lady Toppers.

A 3-pointer by Morris with 37 seconds left concluded the scoring for the evening and gave the Lady Monarchs an 11-point home win over WKU.

Following the loss, the Lady Toppers will travel to Charlotte, North Carolina, before continuing C-USA play against Charlotte (11-4, 2-2 C-USA) on Saturday.

The 49ers are led by redshirt senior guard Jade Phillips, who is tied with Givens for the sixth-highest scoring average in C-USA this season at 15.7 points per game.