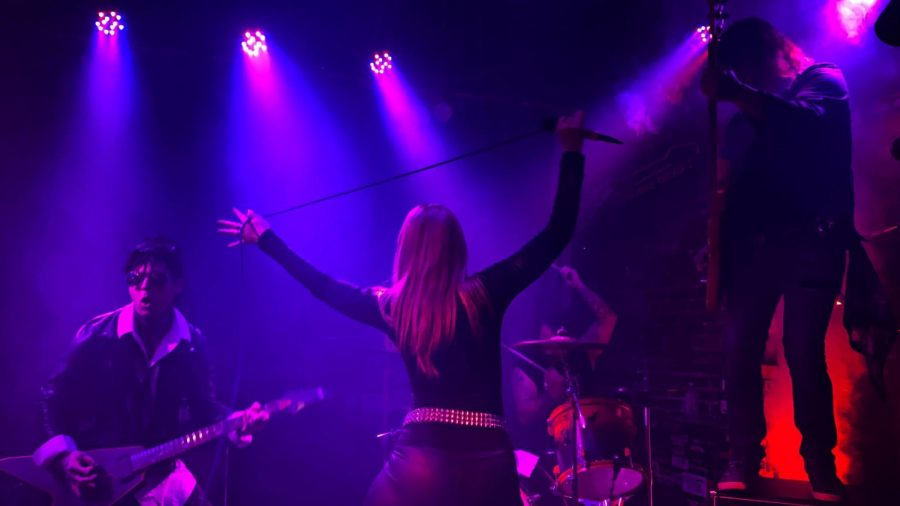 It is not easy for local bands to break through the scene, but one in particular is determined to take on the world.

It all started when Lux and Vendetta, who are now married, met in Lux’s home state of Connecticut. Both going through rough patches, they decided to move to Kentucky for a change of scenery and because Vendetta had family in the area.

Vendetta had played in bands before, and Lux liked to sing, though she had never sung in front of anyone before.

One day, Lux was hanging “Every Picture Tells A Story,” a 1971 album by Rod Stewart, on a wall. Vendetta mistakenly thought the album read “Ivory Picture Story,” and the two joked that it would make a great band name. The rest was history.

“We just started writing songs,” Vendetta said. “Before I knew it, it just kind of took off.”

The pair went on to create a debut demo titled “Tables of Fevers and Fiends,” which was released on Halloween in 2017. With an EP of demos, singles and music videos, the two wanted to perform live but needed others to join them.

While searching for additional members, Vendetta met Fane, a local musician, in 2018. As soon as he heard the band’s music, he knew he wanted to be a part of it because he thought their blended genres and bold imagery were so unique compared to other local bands.

Fane offered to help the pair out, and he got together with them a few times to learn all of their songs. He invited other musicians that he knew to join them, although in the end it didn’t work out and the group remains a trio for now.

“We’ve had people filling in for us on drums and things like that to keep us going,” Fane said.

Ivory Picture Story played its first live show in May 2019 in Nashville and has been working nonstop ever since. Its members find it difficult to describe the band’s genre of music, but Lux described it as “glam punk.”

“Our energy on stage is very punk,” Lux said. “We’re very bombastic and all over the place. We’ve got a punk vibe to us. But our songs have this sheen — it’s got a sharpness to it. It’s cleaner than punk.”

When listening to the band’s music, it is hard to compare its sound to anything else, as there are little hints of various genres mixed throughout.

“You can hear strains of everything,” Vendetta said. “Whenever someone lis– tens to us, they pull out something that I’ve never thought of.”

But the group’s latest single “Jaw Breaker” is almost the opposite. While there is no doubt the song meets the “punk” criteria, it is a little more fun and upbeat, giving off a slight ‘60s vibe. The music video is vibrant and colorful, far different from any of the others.

All in all, Ivory Picture Story seems to be an exciting blend of punk rock, new wave and perhaps the slightest touch of pop.

While many local bands seem to play music for fun or as a hobby, that is not the case for Ivory Picture Story. The band has big plans for the future which go far beyond Bowling Green.

“We want to go as far as we absolutely can and be the biggest thing in the world,” Fane said.

The group works tirelessly to make these goals a reality, giving its all both on and off the stage. Such passion can be seen simply by visiting the band’s YouTube channel. In consideration of each video’s quality, it’s hard to believe each song is recorded in a bedroom rather than a studio and every music video in the kitchen of their apartment.

“All of it is done with, like, 20 bucks, a kitchen and one very nice friend who will work the camera for us,” Lux said.

As Ivory Picture Story is quite different from most bands in the area, it hasn’t been easy for the band to break into the Bowling Green music scene. However, it’s pushing through and playing shows wherever it can.

The band has made a splash at The Dive in Cave City, a bar owned by Leticia Cline, with whom its members have created a strong friendship.

A customer at The Dive recommend the band to Cline, who checked out its music, loved it and booked the group.

“I love their style,” Cline said. “I didn’t know about their stage presence, but they blew us away.”

Cline said the band knows how to capture an audience’s interest, noting customers of her bar often travel to see its shows in other cities.

The group also had the opportunity to play at the historic Exit/In in Nashville back in August, the same stage that hosted the Talking Heads, the Ramones, the Police and many more iconic acts.

“We put our hooks into Nashville to see what would happen, to see if this was viable and if we were going to have a shot at this,” Fane said. “And we did. Nashville proved it to us.”

Currently, the band is working on new music and hopes to tour in the spring. Just last November, it got signed to Curtain Call Records, a record label based in Michigan.

Since being signed, the group’s latest single “Jaw Breaker” has been sent to digital radio and has been played on a variety of stations, including an indie music channel in the U.K.

Although it may be difficult to de- scribe Ivory Picture Story’s music genre, it’s certainly easy to see they are taking Bowling Green — and the world — by storm, and they show no signs of stopping.

Features reporter Kelley Holland can be reached at [email protected]