Hilltoppers encouraged by most November wins since 2006-07 season 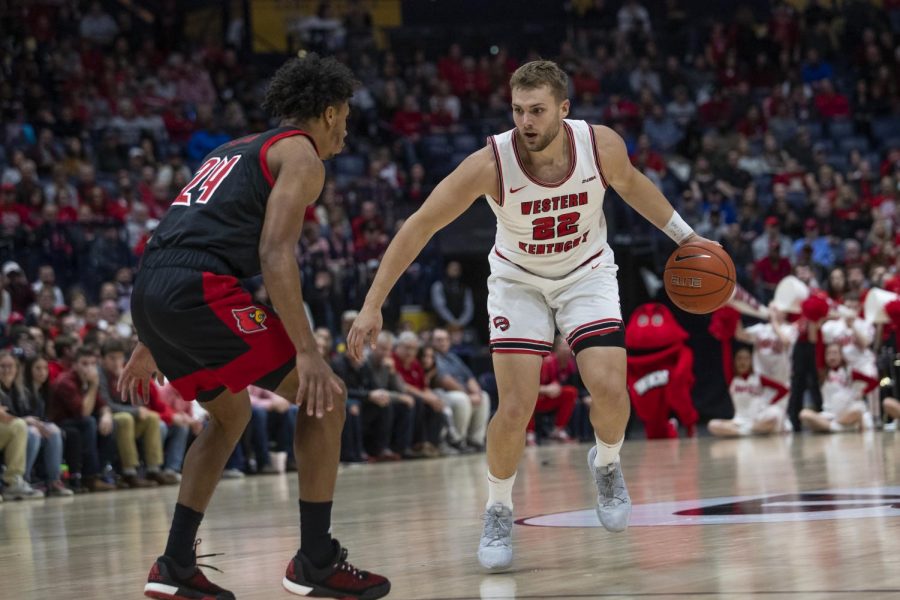 The WKU men’s basketball team has played roughly one-fourth of its 2019-20 regular season schedule, and the Hilltoppers are off to a 6-2 start for the second time under the guidance of head coach Rick Stansbury.

WKU’s previous 6-2 opening came during the 2017-18 campaign, ending in a trip to the National Invitation Tournament semifinals.

So far this season, the Hilltoppers have played in Diddle Arena three times, played four neutral-site games and a true road contest at Eastern Kentucky (3-5).

The Hilltoppers participated in the U.S. Virgin Islands Paradise Jam from Nov. 22-25, posting a 2-1 record and finishing fourth in the early season tournament field. WKU fell to Bowling Green (6-2) early on but later picked up wins over Illinois State (3-4) and Fordham (4-3).

After closing out the tournament with back-to-back wins, WKU traveled to Bridgestone Arena in Nashville to square off with then-No. 2 Louisville (7-0) on Black Friday.

The Cardinals — now ranked No. 1 in the country — dominated WKU from the opening whistle, as Louisville started with a lethal 9-0 run on its way to a convincing 71-54 victory.

Louisville carried a 14-point lead into halftime, and Stansbury said he believes WKU’s early drought was one of several reasons why the Hilltoppers came up short.

“If we were playing a different caliber team, maybe you can dig a hole and come back,” Stansbury said. “But you can’t dig yourself a hole to get down 14 points early against Louisville.”

In both of WKU’s losses this season, the Hilltoppers have trailed by double digits in the first half.

The Hilltoppers were able to dig themselves out of a hole after trailing by 14 points against BGSU on Nov. 22, but the Falcons handed WKU its first loss of the season, 77-75.

Coming into Friday’s in-state rivalry game, the Hilltoppers were shooting 52.8% from the floor and 41.1% from deep, which ranked fifth and 16th in the nation, respectively.

But the Cardinal defense held the Hilltoppers to only 37% shooting from the field and allowed WKU to convert 1-of-17 shot attempts from behind the arc.

“I thought our defense was much better than it’s been,” Louisville head coach Chris Mack said postgame. “Of course, it needed to be against Western.”

Junior guard Taveion Hollingsworth thought WKU struggled to get the ball to the rim against Louisville.

“It was really their half-court defense,” Hollingsworth said. “You know, based off our team, we want to run the ball and we weren’t getting them to miss any shots. They came out hot, and we couldn’t get them to miss any shots, so we had to play through half court, and we kind of struggled through that a little bit.”

Louisville’s half-court defense not only caused WKU to shoot its lowest percentage from the floor this season, but the Cardinals also forced 10 turnovers in the first half.

Prior to WKU’s matchup with Louisville, Stansbury challenged his team to limit the self-inflicted turnovers he thought were hurting the Hilltopper offense.

“If there’s one area, one offensive stat, that we have to get better at, it’s those self-inflicted turnovers,” Stansbury said. “Not the ones other teams cause, but the ones we cause by being too quick, too much in a hurry, walk, charge or forcing a turnover because of us. Teams are going to cause turnovers as is. We’ve got to limit some of those self-inflicted ones.”

Despite WKU struggling against the Cardinals for most of the game, Stansbury said he was pleased with his team’s effort to not fold when Louisville jumped out to a lead.

“Again, we’re disappointed in the loss,” Stansbury said. “But I’m proud of the way our guys battled back. You could have very easily laid down after the first 12 minutes of that game, being down 14 and get beat 40. They’ve beat some people by 40, but we did, we fought back.”

After posting a stellar freshman campaign, sophomore center Charles Bassey has played even better throughout his first eight games of the 2019-20 season.

The Lagos, Nigeria, native went toe-to-toe with both Jordan Nwora and Steven Enoch, showing the NBA scouts in attendance that his skillset is ready for the next level by scoring 14 points and collecting nine rebounds in 36 minutes of action.

“Coming into the game I know our team had great respect for WKU,” Mack said. “They have a very talented team, and when Bassey gets going they’re really tough to stop. He likes to go to that left shoulder, but because you know what he likes to do doesn’t mean you can stop it all the time.”

Stansbury said Bassey and his teammates will only get better from facing one of the best teams in the country.

“Well, there’s no question that you benefit from this game,” Stansbury said. “You don’t ever like getting an L while you’re doing it, but I think from a standpoint of preparation for these guys, the multiple ways that they’re able to attack you with size and strength, we’re not going to see a lot of that. Not many teams are going to see that.”

Following a neutral-site loss over the weekend, the Hilltoppers now have four non-conference games and one exhibition remaining before Conference USA play begins in January.

After a home exhibition against Kentucky Wesleyan on Dec. 17 — a tuneup that won’t count toward the official overall record of either participating team — the Hilltoppers will travel to Kingston, Rhode Island, to meet Rhode Island (5-2) on Dec. 21 before concluding non-conference action against Belmont (5-3) in Diddle Arena on Dec. 28.

Tipoff between WKU and Wright State is scheduled for 6 p.m. in the Nutter Center.